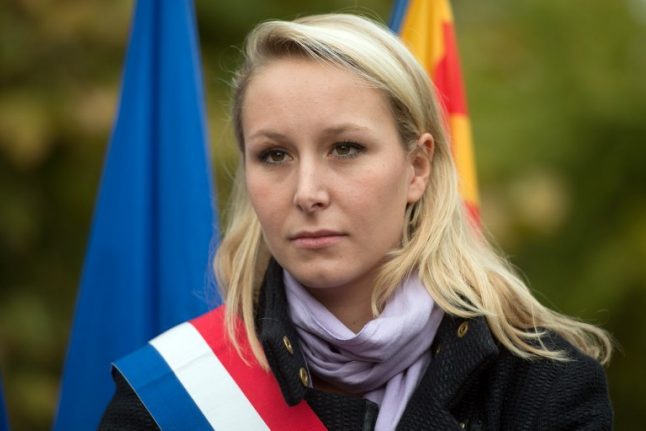 Marion Marechal-Le Pen was just two when she made her political debut, pictured in the arms of her grandfather Jean-Marie in an election poster for his far-right National Front (FN) party.

Fast-forward 25-years to the Tuesday after Emmanuel Macron defeated her aunt Marine to become the next president of France and the blonde, telegenic mother shocked the National Front and to a certain extent French politics by announcing that she is quitting politics at 27 for a planned career in the business world.

As well as stepping down as an MP – she had been France's youngest when she was elected in 2012 at the age of 22, Marion is also quitting as opposition leader on the council for the southern region of Provence-Alpes-Côte d'Azur.

Marion had previously hinted at dissatisfaction with the internal party politicking and her relationship with both Marine Le Pen and the party's deputy chairman Florian Philippot, who has taken the FN in a more “social” direction to the chagrin of its more conservative wing.

Her grandfather, who stood for the presidency five times, called the move a “desertion” – and it's no surprise he is unhappy, as it was her that he backed to take his place in the regional elections of 2015, after a public spat with his daughter Marine forced him to stand down. As for Marion Marechal-Le Pen – “the third Le Pen” – she leaves an impressive career for someone so young, that kicked off when she became France's youngest lawmaker at 22.

And the closely guarded, deeply religious, smiley law graduate certainly has fascinated since.

Ill-at-ease in front of journalists and cameras, she had no qualms in standing up in the lower house National Assembly and accusing a visibly furious Prime Minister Manuel Valls of “moronic contempt” towards the FN.

Or joining the ranks of anti-gay marriage protesters in 2013 when Marine decided to stay away.

Or re-tweeting a video by an FN European Parliament member warning about Islam's threat to France despite strict orders not to publicise it from her aunt — who as always is trying to rid the party of its racist and anti-Semitic image.

(This video is courtesy of the Financial Times)

But Marion was not always so visible.

Born in 1989 in an upmarket suburb of Paris to Jean-Marie Le Pen's second daughter — Marine being the youngest — she grew up in a big mansion along with the rest of the family members.

The home with its large garden was a haven of security for Marion, who suffered from carrying a surname so obviously linked to the figurehead of France's far-right and his string of convictions for hate speech.

“We would be insulted, attacked, sometimes physically threatened,” she recently said in an interview on French television.

“At the time, my school teacher advised my parents to put me in a private school for several years… to give me time perhaps to harden up a bit and to be able to defend myself.”

And so they did. When she went to university to study law, people remember a girl who was discreet, and crucially who had taken Le Pen out of her surname and just kept her father's, Marechal, according to an investigative TV programme on the young lawmaker.

Marion raised her hand, and asked him to stop. Why? he asked.

“She responded, 'you're talking about my grandfather'.”

“Everyone turned around, and the teacher was left speechless. He apologized and left.” Marion appears to have made a reluctant entrance into politics.

She stood — unsuccessfully — for regional elections in 2010, and famously cracked when a reporter asked her to outline priority areas she wanted to address, unable to provide a single example.

Her grandfather nevertheless persuaded her to run in the 2012 legislative elections in Carpentras, a town in the southeastern Vaucluse region.

“She did not want to be a candidate. She even wrote to me. 'Granddad, my decision is irrevocable',” Jean-Marie told AFP.

“I'm from Brittany, I'm stubborn: 'How can you ask people to campaign for the (National) Front if people from our family don't?'.”

And she won aged just 22, becoming the youngest ever lawmaker in the history of modern France.

Since then, bar a short break to have her daughter, Marion has gone from strength to strength.

Her popularity among FN supporters is such that she threatened to cast a shadow on her aunt. And although Marine Le Pen's success in reaching the second round of the 2017 presidential election left her in a strong position, there were suggestions many on the right of the party wanted Marion to make a move to replace her.

It would have been unlikely that Marion would have taken on her aunt, but her decision to step down though has spared the National Front and the Le Pen's of the prospect of any internal strife.

At least now that is.