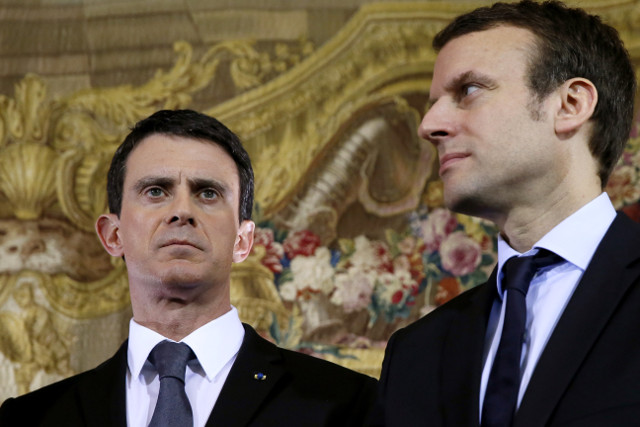 Manuel Valls, left, and Emmanuel Macron. Photo: AFP
Former French prime minister Manuel Valls looks set to be kicked out from the Socialist party, just one day after he pledged his allegiance to president-elect Macron.
“This Socialist Party is dead, it is behind us,” Valls said Tuesday while announcing that he was joining the list of candidates for Macron's République En Marche! movement.
The Socialist party was apparently not impressed by Valls' choice, with senior Socialist figure Jean-Christophe Cambadelis saying on Wednesday that “an exclusionary procedure was underway”.
Whether this means Valls will be kicked out or not remains to be seen, although it certainly looks that way.
Cambadelis told BFM TV: “In the Socialist Party, there is only one allegiance. It's very simply, you're a candidate of the Socialists or you're not.
“Even if history is on your side, if you're not a candidate for the Socialists then you're no longer a Socialist.”
It appears Cambadelis was referencing comments from Valls, who noted on Tuesday night that he had been a loyal party member of the Socialists.
It remains to be seen whether Macron's movement will actually accept Valls as a candidate, after a less than friendly reception from Macron's camp on Tuesday.
The party spokesman Griveaux Benjamin said  that, as far as he was aware, Valls hadn't formally lodged an application to be a candidate.
“He will have to do lodge an application like everyone else because the rules are the same for everyone,” Benjamin told Europe 1 radio.
Macron was actually Economy Minister when Valls was prime minister, with the new reshuffling showing how the political map is being re-drawn in France in the wake of the 39-year-old Macron's crushing victory over far-right candidate Marine Le Pen on Sunday.
SEE ALSO: Macron is president, but now he faces a real battle to take power