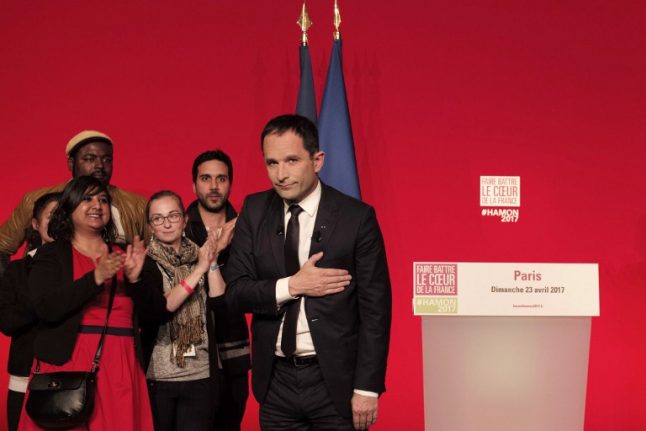 Photo: AFP
Hamon, who finished behind Emmanuel Macron, Marine Le Pen, François Fillon and Jean-Luc Melenchon, said he invited members of any party to join him and “rebuild the left”, although he will remain a member of the crisis-hit governing Socialist Party.
The politician, who pulled in only 6.36 percent of votes in the first round of voting last month, told France Inter radio that he intended to “rebuild an inventive left that will transcend political labels”.
The party will launch on July 1st, he said after the parliamentary elections for which the ruling Socialist party is expected to suffer heavy defeats and possibly be left with just a handful of seats.
Hamon reiterated that he did not intend on leaving the PS, even after hard leftist and fellow defeated presidential candidate Jean-Luc Mélenchon had offered him an alliance if he were to leave.
Hamon was the surprise winner of the Socialist nomination for the presidential election, beating former prime minister Manuel Valls.
But his leftwing policies, and his association with unpopular outgoing President Francois Hollande, proved unpalatable to voters and he scored just 6.4 percent of the first-round vote in April, being overtaken by Communist-backed Jean-Luc Melenchon.
The election, resoundingly won by centrist Emmanuel Macron on May 7 over far-right candidate Marine Le Pen, was the first time since 1958 that neither of France's main left or right parties reached the second round.