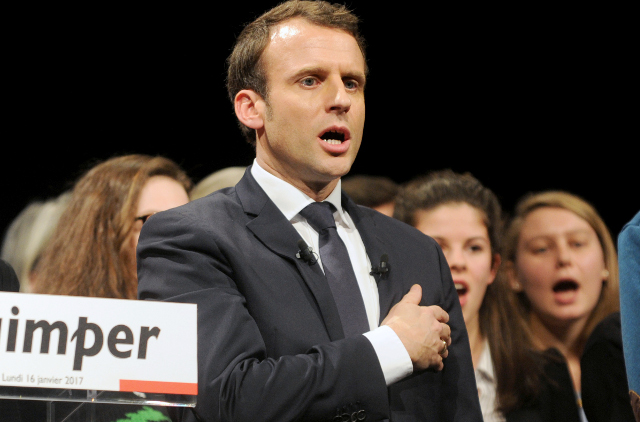 Photo: AFP
French political analysts and sections of the media have long been concerned about the Americanization of their politics.
Some have lamented the rise in the cult of personality, the shift of the role of the president from symbolic head of state to head of the government and the growing importance of image over substance.
Nicolas Sarkozy was dubbed “Sarko l'Americain” for his “bling bling” style of presidency in which his relationship with actress and model Carla Bruni provided fodder for the glossy magazines.
But it feels in 2012 the French presidential campaign was even more “Yankee”, as the French say, than ever.
Although crucially somethings remain very different, not least the result, as many have pointed out.
1. The hand on heart during the anthem Much of the French press picked up certain candidate's, particularly Emmanuel Macron and Socialist Benoit Hamon placing their hands over their hearts during the singing of the Marseillaise at the end of their public rallies.
The gesture appears to have been lifted from the way American politicians often adopt the posture when they are singing the “Stars and Stripes”.
But Edouard Lecerf a pollster from the agency Kantar Public and specialist on French politics told The Local the action should not be misinterpreted as a show of patriotism.
“To the French, this is more about showing that what you are saying comes from the heart,” Lecerf said. 2. The primaries.
The French were already talking about the Americanisation of their politics back in 2012 when the Socialist party decided to hold an open primary, based on the system Americas two parties use for choosing their candidates.
But this time round it the Republicans and the Greens also joined in the fun, meaning the presidential campaign felt like it had been going on for months and months… and months.
3. The 'first lady'
Will Brigitte Macron be the first spouse in French politics to hold an official position as 'first lady'?
It has been suggested she wants to model her role and that held by former US First Lady Michelle Obama, wife of Barack Obama.
Macron has been clear throughout his campaign that he intends to carve out an official role for his wife even though the position does not exist in the French Constitution and has no legal status.
That would suggest Brigitte Macron's function could become more like that of a First Lady in the United States, where Donald Trump's wife Melania has her own office, a budget and a team of 12 people, including a chief of staff. This has led to suggestions Mrs Macron could model herself on a certain popular former American president's wife.
“Michelle Obama is a good reference for Brigitte Macron,” French author and journalist Alix Bouilhaguet, who wrote a book on the presidential candidates' partners, told The Local.
“She plays a full and meaningful role next to Emmanuel Macron and she wants to be a real Premier Dame,”  the author added. 3. Macron's 'helpers'
During the election campaign, most of the French public probably had at least one encounter with one of Macron's team of volunteers based around the country, known as his 'helpers'.
While campaigning on the ground is not new to French politics, at the launch of En Marche! in April 2016, the 'helpers' were sent out to regions all over France to conduct surveys on which issues most matter to them and remained an integral part of Macron's campaign.
En Marche! built up an unprecedented support network including 3,900 local volunteer committees, that was compared to the organisational structure of Barack Obama's campaigns.
“The idea is not new but the way it was done and presented is,” said pollster Edouard Lecerf from Kantar Public. “This was not just about campaigning but also about marketing, which was clearly influenced by other democracies.”
Macron's positive campaign that talked of hope an potential was also seen as being inspired by Obama's 'Yes We Can' message, not to mention Marine Le Pen stealing from Donald Trump with her campaign to “Make France Great Again”.
And his rallies in which he often appeared with just a shirt, sleeves rolled up also appear to have inspired by the ex-American president.
4. Introducing…the 'president-elect'
Even the language has been influenced.
Ubiquitously referred to as the 'president-elu' or 'president-elect' by the French press, Macron seems to be the first to be awarded this title in France, which will obviously be dropped once he is inaugurated on Sunday.
Newly American president's are commonly referred to as a “president-elect” until they take office.
“It's striking that everyone is referring to him as the 'president-elect' but international image is important,” Lecerf told The Local. 5. The Debates
This year there were an unprecedented number of debates between candidates and they nastier than ever before.
There were three before the Republicans primary, two before the Socialists primary and one involving the five main candidates.
Then there was the unprecedented debate between all 11 candidates, including five who had little hope of getting over five percent of the vote.
Then came the last debate – a two and a half hour mudslinging match between Marine Le Pen and Macron.
Deciphering the politics from the slew of name-calling, insults and invective was no small feat and while the French people were unhappy with the distinct lack of policy being discussed, it had a lot in common with the Clinton/Trump debates of the recent US election. 6. Macron has money
Yet another aspect of the Macron presidency to cause controversy was his money.
Having worked for Rothschild as an investment banker, he does not match the profile of a typical French president.
While his predecessors have usually have long backgrounds in politics, perhaps even their whole lives, Macron was young and rich, had never been elected and more to the point he was unapologetic about it all.
While many on the left and the far right tried to use this against him and play into French people's suspicions of those with wealth, his supporters saw his background outside politics as a plus, which is generally the case in America, where former actors and businessmen have become presidents.