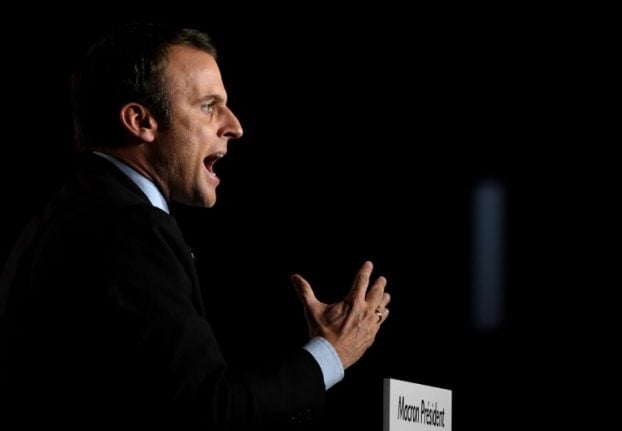 All photos: AFP
Macron, France's soon to be youngest ever president at 39, has major plans for France, including a “simplification” of France's labour laws and cuts to the public sector and public spending.
But to bring these plans to action, the president-elect has said he will not wait for the backing of the French parliament – which he he is unlikely to get a majority in anyway.
Instead Macron is planning to bypass Parliament and push through some new reforms by decree (“par ordonnances” in French).
“There will be a social dialogue in the spring and summer,” he said, adding that after that he will ask his prime minister to proceed by decree “as it is faster and more efficient”.
Not to be confused with the highly controversial Article 49.3 (used by ex-PM Manuel Valls to pass controversial labour reforms last year) – which is an even quicker and more powerful way to force laws through – passing laws by decree is still controversial and it likely won't be a smooth road for the centrist.
“Macron will likely face a struggle, if not from the legal side of things then in the face of people's opinions,” Edouard Lecerf from polling agency Kantar Public told The Local.
“Macron wants to move quickly with the labour laws, but the left are all ready to pull out their guns to fight any attempt to go faster, and labour reforms are exactly what they'd want to mobilize their troops for.”
After all, it took the unions less than 24 hours to protest against Macron after he was elected president on Sunday. Force Ouvriere union chiefs have already noted making laws by decree “sweeps away social dialogue and consultation”.
“There will be a problem with this, one way or another,” Jean-Claude Mailly, the head of the union, told France Inter radio.
Even Francois Bayrou, the centrist who backed Macron from the earliest days, has said that he'd prefer “dialogue” to passing laws by decree.
So can Macron actually do it?
Well, it appears that he can (and will try). After all, it's nothing new for France to pass laws by decree.
Le Parisien newspaper noted that some 85 laws have been published by decree in France between 1984 and 2013 alone, including by the last two presidents Francois Hollande and Nicolas Sarkozy.
However, while passing laws by decree may skip Parliament in some stages, it still needs to be involved in the procedure.
“Essentially, you have to ask Parliament for permission to do it in the first place, then Parliament must sign it to allow it to pass at the end,” Lecerf explained.
So in other words, Parliament needs to give the green light, but won't be involved in the dialogue.
When facing criticism about ruling by the controversial move before, Macron has argued that it's not undemocratic.
“I'm explaining beforehand, I'm telling you, that's democratic,” he said.
He also likes to point out that the technique “helps speed up the debate”.
Lecerf from polling agency Kantar Public said passing the reforms would be the first big challenge that Macron will be remembered by as president.
“This is going to act like a stress test for Parliament. All members will know that it's important, and everyone will look back on this and either remember it for either the speed and strength at which is passed, or for the fact that it failed,” Lecerf said.
SEE ALSO: Who's the big secret Emmanuel Macron has been hiding?