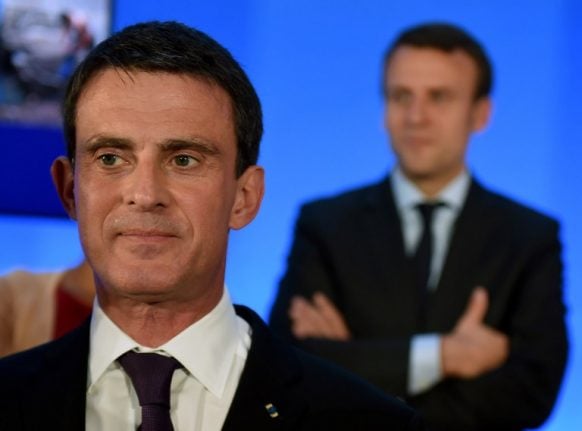 The statement from Macron's former boss — Macron was economy minister when Valls was premier — shows how the political map is being re-drawn in France in the wake of the 39-year-old's crushing victory over far-right candidate Marine Le Pen on Sunday.

“I will be candidate for the presidential majority and I wish to join the list (of candidates) of his movement,” Valls, a Socialist, told RTL radio.

“Because I am a man of the left, because I remain a Socialist, I am not going to disown 30 years of my political life,” Valls said. “I want Emmanuel Macron to succeed.”

“This Socialist Party is dead, it is behind us,” Valls added Tuesday.

It remains to be seen whether Macron's newly renamed “Republique en Marche!” (the Republic on the Move) movement will accept Valls as a candidate.

Their reaction to the news that Valls wanted to join them was hardly greeted warmly.

The En Marche! spokesman Griveaux Benjamin said on Tuesday that, as far as he was aware, Valls hadn't formally lodged an application to be a candidate.
“He will have to do lodge an application like everyone else because the rules are the same for everyone,” Benjamin told Europe 1 radio, adding that there were 24 hours before the application window closed.

The new president has said he wants to break with the traditional left-right political axis in France and Valls is inextricably linked to unpopular outgoing Socialist President Francois Hollande.

Valls resigned as prime minister to launch his own presidential bid but in a shock result was defeated in the Socialist Party's primary in January by left-wing candidate Benoit Hamon.

Hamon went on to make a disastrous showing in the presidential election, being eliminated in the first round in fifth place.

Macron's year-old movement — it does not even have the status of a party yet — has said it will field candidates in all 577 seats for the two-round parliamentary elections on June 11 and June 18.

But many analysts believe the centrist movement is unlikely to win a majority and will be forced to govern in a coalition.

SEE ALSO: Macron is president, but now he faces a real battle to take power