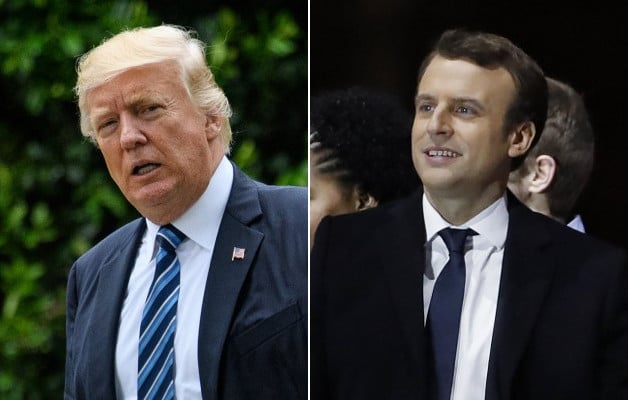 Photo: AFP
The US political establishment gave a broad welcome Monday to France's election of Emmanuel Macron, taking a cue from President Donald Trump who had kept his distance from Marine Le Pen despite his supporters' enthusiasm for her.
Back on May 6, 2012, it was Democratic president Barack Obama who dialed socialist Francois Hollande the day of his victory to offer congratulations and invite Europe's newest leader to the White House ahead of a G8 summit.
Obama's Republican successor sent out an ebullient tweet about Macron's win 82 minutes after the results were announced Sunday, saying “I look very much forward to working with him!”

Congratulations to Emmanuel Macron on his big win today as the next President of France. I look very much forward to working with him!

The billionaire formally extended his congratulations in a post-election phone call on Monday. According to the White House, Trump “emphasized his desire to work closely with President-elect Macron in confronting shared challenges, and noted the long and robust history of cooperation between the United States and its oldest ally, France.”
And just as Obama and Hollande met each other at two key summits in the United States in May 2012, Trump and Macron will meet in Brussels during a NATO summit at the end of the month.
Trump made a point of not receiving Le Pen, whose anti-immigrant stance aligns with some of Trump's nativist positions, when she visited New York in January.
While he met publicly with Britain's Brexit spearhead and anti-immigration firebrand Nigel Farage, Trump has never made an appearance with the leader of France's far-right National Front.
After warmly welcoming Chinese President Xi Jinping, Trump appeared to confirm that it is “chemistry” between world leaders, more than ideology, that counts for him.
In Congress, Speaker of the House of Representatives Paul Ryan offered unambiguous congratulations to France's new leader: “We look forward to working with him to build on the strong relationship between the US and France,” Ryan tweeted.
If most of the public praise came from the Democrats, Republican lawmakers specializing in foreign affairs highlighted transatlantic continuity.
“France is America's close ally & good friend,” tweeted Senator Marco Rubio, who ran for the Republican presidential nomination last year against Trump.
“I look forward to working w/ @EmmanuelMacron to strengthen relations & advance shared values.”
Relative indifference
Many also took the Macron victory as a repudiation of a common adversary: Russian President Vladimir Putin, a leader derided across the political spectrum in the US Congress because of the  Kremlin's efforts to interfere in the American political process.
The hacking of the Macron campaign Friday night ahead of the French elections served as a reminder of the run up to the US vote, when hacked emails from Hillary Clinton's campaign staff were published by WikiLeaks.
Democratic Senator Ben Cardin said the French result sent a message that Putin's worldview has been “rejected by European voters.”
“In spite of allegations of Russian interference similar to that seen in our country last year, democratic institutions across France proved resilient,” added Cardin, the top Democrat on the Senate Foreign Relations Committee.
“Defeat to those interfering w/democracy,” tweeted Clinton, who maintains that her 2016 loss against Trump was due in part to Russian intervention.
More generally, the French election has been viewed through the prism of Brexit and the election of Trump, and Le Pen garnering the bulk of US television coverage.
On Monday, The New York Times and Washington Post each portrayed Macron's victory as a defeat for the far right movement.
Not surprisingly, the American far-right was disappointed that the “globalist” Macron defeated Le Pen, whose every move they covered closely.
But the news of Macron's victory landed rather flat with conservative media.
On Breitbart's website, it was North Korea and not France that grabbed top headlines early Monday.