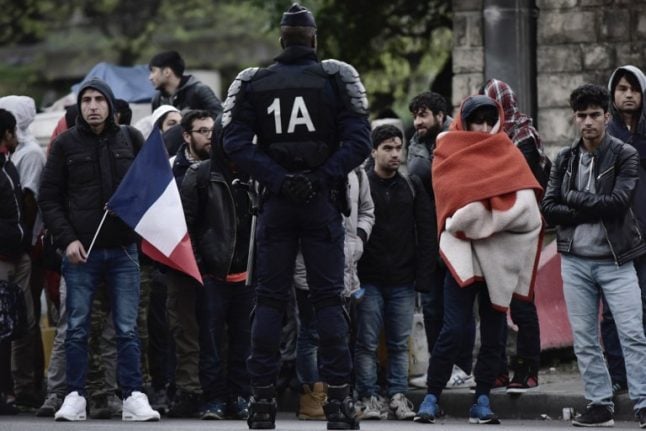 All photos: AFP
Hundreds of police moved in at dawn to remove the migrants, camped between major access roads into the capital, an AFP journalist said.
The settlement at the Porte de la Chapelle area of the city was located just metres from a new refugee transit centre set up by Paris city authorities late last year to take asylum-seekers off the streets but which has limited space available.
These “illegal camps” present “major risks for the security and health of their occupants as well as for local residents,” Paris police said in a statement. Police halted road traffic on a major crossroads in the north of the city in order to gain access to the camp, where a fight between migrants last month left several injured.
About 350 police were involved in the operation along with some 100 municipal employees and staff from humanitarian groups.
“The government will take us into houses. I don't know where but it's fine,” said Said, who said he had been sleeping outside for a month. “For some, it's been three months or more.”
Last month, a huge fire gutted one of France's biggest migrant camps, housing 1,500 people near the northern French port of Dunkirk, which started after a brawl involving hundreds of Afghans and Kurds.
Europe has faced its biggest migrant crisis since World War II over the last few years as millions of people have fled war and poverty in the Middle East, Africa and South Asia.
France has welcomed only a fraction of the newcomers.