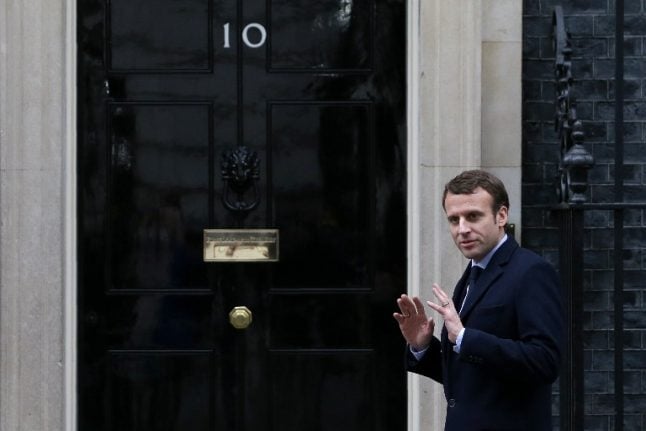 Emmanuel Macron arrives outside 10 Downing Street on February 21st 2017, ahead of a meeting with British Prime Minister Theresa May. Photo: AFP

“This evening the Prime Minister spoke to President-elect Macron to warmly congratulate him on his election victory,” a spokesman said, after centrist Macron triumphed over his far-right rival Marine Le Pen.

“The leaders briefly discussed Brexit and the Prime Minister reiterated that the UK wants a strong partnership with a secure and prosperous EU once we leave,” the spokesman added.

Downing Street praised “the UK and France's unique partnership providing a strong foundation for future co-operation”, ahead of Britain starting talks to end its membership of the European Union.

Macron won the presidential election on a pro-EU platform and arrived at his victory speech in the courtyard of Paris' Louvre museum as the bloc's anthem “Ode to Joy” played out.

Britain's future relationship with the EU since last year's shock Brexit referendum remains at the heart of political debate in the UK, ahead of the country's general election on June 8th.

“Huge congratulations to @EmmanuelMacron on an amazing victory. We look forward to continuing the great partnership between our two nations,” wrote Foreign Minister Boris Johnson, who played a key role in the Brexit campaign.

Huge congratulations to @EmmanuelMacron on an amazing victory. We look forward to continuing the great partnership between our two nations

The view was echoed by opposition Labour leader Jeremy Corbyn, who said he looked forward to working with Macron while also expressing relief at the results.

“I am delighted that the French people have decisively rejected Le Pen's politics of hate,” he wrote on Twitter.

The French people have chosen hope over fear and unity over division. Congratulations @EmmanuelMacron. #FrenchElection pic.twitter.com/zSNRaEdPRE

But there was dismay at the outcome from former UK Independence Party leader Nigel Farage.

“A giant deceit has been voted for today. Macron will be Juncker's puppet,” he wrote on Twitter, referring to European Commission chief Jean-Claude Juncker.