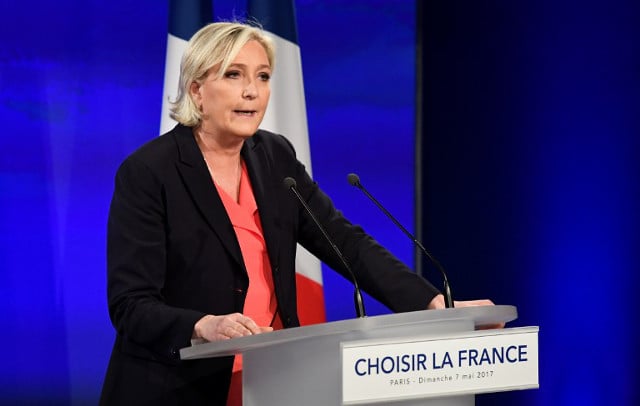 While the headline figure of 66.1 percent suggests Emmanuel Macron and his En Marche! (On the move) movement trounced Marine Le Pen in Sunday’s second round vote, it doesn't tell the whole story.

The French far-right leader was not wrong when she said the result was “massive” for her party and indeed she too could claim to be moving forward.

Le Pen pulled in 10.6 million votes, double the number her father Jean-Marie gained in the second round of the 2002 presidential election.

That number represented a new record, beating the 7.6 million the far-right leader picked up in the first round on April 23rd.

All the charts tell the same story: The National Front are on an upward trajectory, and who knows where it will take them in five year’s time.

In other words Macron is under immense pressure to deliver on his promise made on Sunday night to unite France and heal the divisions in the country.

READ ALSO: Why Le Pen was always likely to fail in her quest to match Trump

In front of thousands of supporters at the Louvre he promised to listen to the anger of those who had either voted against him (22%) or couldn’t bring themselves to vote for him, in other words the 34 percent who abstained or cast a blank vote.

When he mentioned those who had voted for Le Pen during his victory speech it prompted boos from EU-flag-waving supporters.

But Macron stopped them in their tracks.

“Don’t whistle them,” he said. “They have expressed their anger and dismay. I respect that. But I will do everything I can in the next five years so there is no reason to vote extremes.”

But Marine Le Pen knows the issues that drove so many to back her such as immigration, identity, the role of Islam, anti-EU feelings, and of course high unemployment, will likely all be around in the years to come.

She believes that her “forgotten France”, as she calls the peripheral towns and villages that backed her in big number, is unlikely to be suddenly remembered by Macron, a liberal, pro-free market leader who favours the kind of policies that left these voters feeling abandoned in the first place.

Author Camus says many French are beyond the point of despair when it comes to their hatred for the country's political system.

Macron can promise to hear their “anger and dismay”, but can he really do anything to heal it?

Le Pen knows however that she can’t just sit around and wait for more of the “losers” of globalisation to turn towards her.

Her National Front party is a tainted brand. Even before the election some 58 percent of the French people considered the National Front to be undemocratic.

And perhaps her surname is a burden too, thanks largely to her father, a convicted Holocaust denier.

She dropped both for her campaign in a bid to appear more electable, first calling herself just Marine and then stepping down as leader of the National Front after the first round.

While she has detoxified the party's image to an extent, it still remains in the eyes of many voters a party polluted by anti-Semitism, racism and Islamophobia.

Hence Le Pen’s hint on Sunday night that she will put the National Front through a major makeover, including perhaps a name change.

She told supporters on Sunday night the National Front would “profoundly renew itself to be equal to this historic opportunity and the expectations expressed by the French in this second round.”

“I suggest we begin a profound transformation of our movement to create a new political force,” she said, adding: “I call on all patriots to join us.”

That image overhaul won’t happen before Le Pen’s next big challenge – the parliamentary elections in June.

She will have to prove there's substance to her statement that the National Front was now the country's “biggest opposition force”, given the collapse of the left and the right in the presidential election.

The National Front currently has only two MPs, she will be hoping to increase that number to above 20.

But Le Pen may face opposition, not least from her father, who immediately dismissed the idea of a name change.

Her powerful niece, the more hardline Marion Maréchal-Le Pen – long rumoured to be a potential successor – may also resist another change in direction.

She said the election result had been somewhat disappointing and “reflection” was needed.

Marine Le Pen also has allegations hanging over her that she and her party defrauded the EU out of €300,000 of public funds. At some point she will need to answer the magistrates' summons that she has ignored up to now.

There’s no doubt the National Front party has some turbulent times ahead, but the far right knows that the “anger, fear and doubts” that push voters to the extreme will likely still be there in five years time.