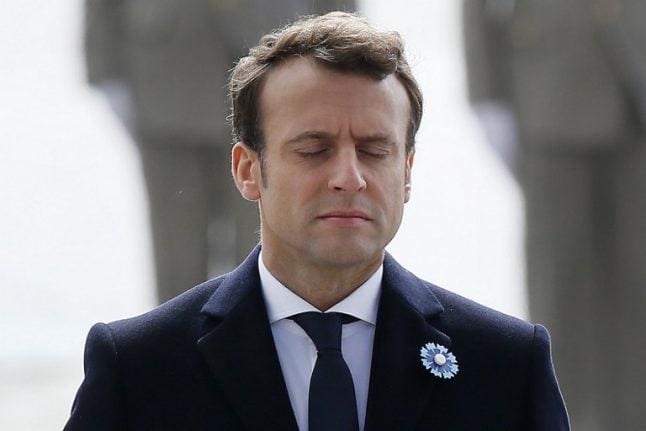 All photos: AFP
Macron's legitimacy as Franc's president is hardly the firmest.
Yes, he may have won 66 percent of the votes on Sunday, but remember that one third of French voters could not bring themselves to vote, some 10 million voted for an extremist in Marine Le Pen and just under half of those who backed him  were voting to block the far right.
The result is hardly a ringing endorsement for Macron, even if he did eclipse all the other candidates on offer.
But winning the presidential election may have been the easy part for the 39-year-old man dubbed the “Mozart of Finance”.
He faces a far greater challenge to persuade voters to give his year old En Marche! movement a majority in parliament that will allow him to govern.
“It's going to be hard for the En Marche's newcomers running for MP to always win against incumbent lawmakers who are generally better known,” Bruno Cautrès, French political analyst from the Cevipof think tank, told The Local on Monday.
Indeed, Macron faces a tall order to secure the majority he needs to push through his ambitious agenda of labour, welfare and education reforms.
Le Pen's National Front (FN) and the other election losers are all hell bent on bouncing back in the parliamentary vote. Le Pen sounded the charge for her next battle against the “globalist” Macron just minutes after Sunday's results were announced.
French voters have traditionally rallied around the newly elected president in the general election held weeks later.
But for the first time in the country's post-war history, France's new leader does not have a big party machine behind him, after the two main parties, the Republicans and Socialists, crashed out in the first round of the presidential election. 'Majority for change'
Macron founded his centrist En Marche! (On The Move) movement of mostly political neophytes just a year ago on a promise to inject new blood into France's discredited political class.
Half of his candidates for the 577 seats up for grabs in the two-round June 11-June 18 National Assembly election will be political newcomers, he has said.
The other half will be made up of figures from the allied centrist Modem party and defectors from the left-wing Socialists and right-wing Republicans who can keep their existing party membership and still run under the slogan “Republique En Marche”.
Macron's team has expressed confidence he can win an outright majority of 289 seats, despite the electorate being split four ways between the centre, the right, the far-right and the left.
“This majority for change is what the country wants and what it deserves,” Macron told supporters on Sunday.
Many analysts are skeptical about his ability to win a majority with En Marche! candidates alone, meaning he would have to form a coalition of lawmakers committed to his agenda – something new under France's current constitution.
Furthermore, his economic agenda, particularly plans to weaken labour regulations to fight stubbornly high unemployment, are likely to face fierce resistance from trade unions and his leftist opponents. Leading in the polls
Macron's En Marche! party may be leading in the polls for the general election, but that doesn't mean it will win a majority.
A poll on Sunday by Kantar-Sofres showed that En Marche could count on 24 percent of support in the first round on June 11th, just a hair's breadth ahead of Les Republicains at 22 percent and the National Front at 21 percent.
The traditional centre-right Republains, whose candidate Francois Fillon crashed out in the first round amid a fake jobs scandal, hopes to strike back and force Macron into a coalition arrangement in parliament.
The far left, emboldened by the first-round success of candidate Jean-Luc Mélenchon, who took an unexpectedly high 19.6 percent in the first round, is also aiming for a strong showing, and can count on 15 percent of support according to Sunday's poll.
The survey had no projections for the second round on June 18th. Life without a parliamentary majority
If Macron can't get a parliamentary majority then he will be more of a figurehead leader of France, who won't have the option of pushing through his En Marche! reforms.
Some have compared the scenario to him becoming similar to a monarch, while it would be Macron's prime minister who has the keys to the executive powers in France.
France is no stranger to this kind of set up – known as “cohabitation” in French – resorting to the system most recently from 1997 to 2002 when President Jacques Chirac was lumped together with Socialist PM Lionel Jospin. A similar thing has happened twice more in postwar France.
Macron, of course, is focusing on getting that majority rather than having to end up with a cohabitation of his own, and has been pushing to field candidates in every electoral district.
“I want experienced people in the government, but those who come from civil society, who have legitimacy through the skills and what they have done and not necessarily from politics,” Macron told BFM TV last week.
But it won't be a walk in the park for Macron. On Sunday, Francois Baroin, a leader of the Republicans, said the party was aiming for an “outright majority” in June.
So what exactly will happen this time around? It's almost impossible to guess. Even more so because you can expect inter-party deals to be made in the week between the first and second round of the general election.
France goes to the polls for the third time on June 11th, then once again for the second round on June 11th.
READ ALSO: Eight reasons why Emmanuel Macron has little reason to celebrate his win