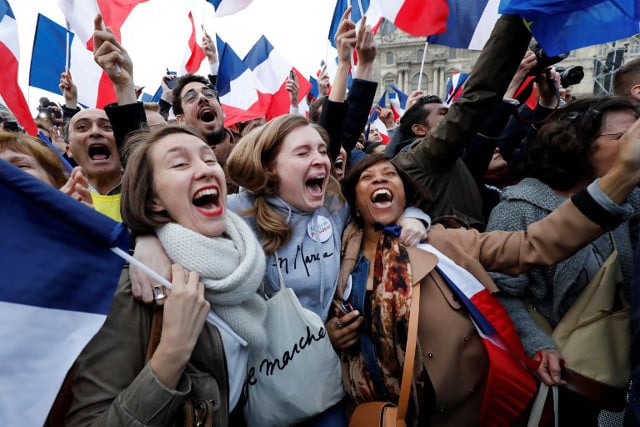 Thousands of flag-waving supporters gave Emmanuel Macron a rapturous welcome Sunday as he strode into the courtyard of the Louvre museum to the strains of the European anthem after his decisive election victory.

The glass pyramid in the world-famous courtyard glowed golden as 39-year-old Macron made a solitary walk to a stage in front, looking solemn.

“Tonight, France won,” the pro-EU centrist, who will become the nation's youngest ever president cried to the crowds, who yelled with joy and chanted “Macron President!”.

“Everyone told us it was impossible, but they don't know France,” he said, before vowing: “I will serve you with love.”

The rousing speech lasted just a few minutes before Macron's wife Brigitte, 64, and around 20 people including family members joined him onstage.

I swear one of the biggest cheers of the night was for Macron's wife Brigitte. pic.twitter.com/annKWLMtTi

The new leader then clasped his hand to his heart and closed his eyes as he sang along to the French anthem, the Marseillaise.

Many of the mainly youthful supporters were wearing the T-shirt of Macron's centrist movement En Marche (“On the Move”), set up just a year ago.

A whirlwind of emotions had swept the crowd at the Esplanade du Louvre in the minutes around 8pm on Sunday.

In the moments before the results were announced, it was a mix of confidence and niggling doubts among some.

“We are certain he will win, we saw the exit polls on Belgian TV,” said one woman in her forties who preferred not to be named.

There was a build up of flag-waving excitement as 8pm approached and throughout the countdown to the results, followed by explosive cheers when Macron's face was put up on the big screen.

The crowd erupted in flag-waving glee for minutes after the result was announced, as Macron supporters hugged one another and leapt for joy.

“I'm so happy, it's been an 8-month battle,” said 37-year-old Frederic, who works in fashion, over cheers from the crowd.

Others talked of “pure joy”, with one supporter saying he felt “like a plant seeing the sun for the first time”.

After the elation, a kind of calm swept over the crowd as the result sunk in, and several members of the public told The Local they were feeling an overwhelming sense of relief.

“It's a relief to see that Le Pen has such a low score. It was obvious Macron would win but 65 percent is very good news,” Casimir, a 27-year-old entrepreneur said.

“Now we have a new president with a whole new movement. I'm very excited now to see if he gets supported by everyone in France. We know we have a divided country but I hope he is given the opportunity to do what he wants to do to lead France.”

Indeed, it never felt certain that Macron was going to win, despite his 20-plus point advantage in the polls in the lead up to the vote.

The shocks of Brexit and Donald Trump meant no one was counting their chickens too early.

But with their hopes proving a reality, the supporters of 39-year-old Macron can now look to a future under the guidance of France's youngest president in modern times.

And the youth of the new president goes down well with the younger supporters.

“This is incredible, it's a big opportunity for young people in France and abroad,” said 19-year-old Guillaume, a law student in Paris.

“I'm a student, I have to work to pay for my studies and Macron's programme is the best for young people like me who want aim higher. It's the best opportunity ever and I'm extremely happy.”

Of course; many pointed out that just because Macron would lead France for five years, it didn't mean the face of the far right would be buried forever.

“We have to continue to battle against the National Front, against Le Pen. Just because she didn't win this time doesn't mean she will disappear,” said 19-year-old Guillaume.

But others were more optimistic.

“This is fantastic, I'm filled with joy. And I think it's all over for Marine Le Pen and the National Front. She has finally gone down, France has spoken,” said Karim, a 50-year-old painter.

Karim was among the supporters who had taken to dancing in the streets in pure joy.

“We now have a France where we can live without stress and in peace. I'm sure it wouldn't be anything like that if Le Pen had won.”

Just like the painter in his fifties, the vast majority of the crowd at the Louvre is seeing the evening in with extremely good spirits.

Dance music blasts from the loudspeakers as darkness sets in, the flags continue to wave, and the crowd looks forward as one to a new future for France.