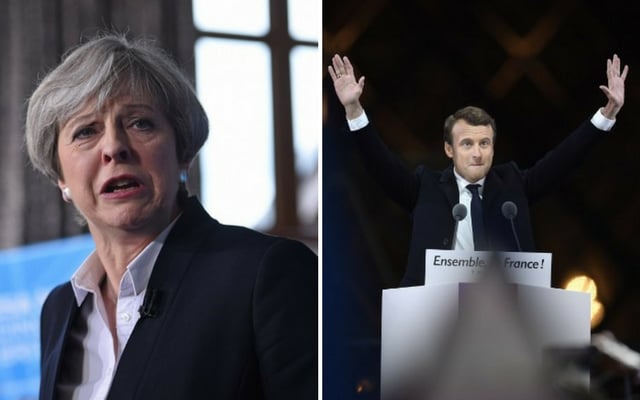 “France's new hope puts cloud over Brexit,” read a front-page headline in the Daily Telegraph. The paper said Macron could be expected to “continue with France's already tough stance on Brexit”.

In the Daily Mail, which also supported Britain's shock vote to leave the EU last year, columnist Robert Hardman wrote that Macron “stands alongside those who favour the big stick rather than the big carrot”.

Macron, a pro-European centrist, has been critical of the Brexit vote during the campaign, defining it a “crime” in an interview for Monocle magazine in March.

As he arrived for his victory speech outside the Louvre museum in Paris on Sunday, the European Union's anthem “Ode to Joy” played out — a fact that was highlighted in British media reports.

But Macron's chief economic adviser said on Monday that Emmanuel Macron will hold a “tough” line during Brexit negotiations but will not seek to “punish” Britain.

“I don't think anybody has an interest in a hard Brexit,” Jean Pisani-Ferry told the BBC.

“There is a mutual interest in keeping prosperity that exists and has built over the years… and obviously also the security and defence relationship, which is extremely important.”

Analysts have said that while Macron is likely to be tough on Britain's divorce settlement, a victory for Marine Le Pen would have been a worse outcome as it would have meant negotiating with a European Union in disarray.

His election “may make it easier for the EU to come to a sensible conclusion” on Britain leaving, Jonathan Portes, a professor of economics and public policy at King's College London, told AFP.

Macron's victory is “good news for Europe as a whole, including the UK,” he said, underlining that Le Pen “would have been far worse”.

He also said, however, that Macron was likely to “take a relatively hard line on the UK's continued participation in the single market”.

Given his banking background, he could also seek to lure more financial jobs to Paris, Portes said Crispin Blunt, head of the British parliament's foreign affairs committee, made the same point.

“We don't want to be negotiating with an EU in existential crisis — which it could be if Le Pen had won,” the Conservative MP told the Daily Telegraph.

May's Downing Street office issued a brief statement saying she had congratulated Macron and discussed Brexit with him but gave no further details.

Theresa May has already sent her congratulations to Macron. pic.twitter.com/HiwqvPv461

In a rare honour for a presidential candidate, Macron met May in London in February, where he promised “a fair execution of Brexit, protecting French and European interests”

But he told a rally of expatriate voters afterwards: “The best trade deal for Britain… is membership of the EU.” He also said he would aim to bring back to France some of the thousands of French expatriates who have moved to Britain in recent years.

In his election manifesto, Macron said he would defend the integrity of the single market. “All companies who have access to it must be subject to the same rules,” he said.

Relations between May and EU leaders have become increasingly rancorous in the run-up to Britain's general election next month, with the prime minister accusing Brussels of making “threats” against the country over the highly complex divorce proceedings.

Macron's chief economic advisor Jean Pisani-Ferry told BBC radio that the new French leader would be “tough” with Britain but would not set out to punish it and would seek to avoid a “hard Brexit”.

“There will be a tough negotiation and he will be tough,” he said. When asked if France could seek to “punish” Britain for voting to leave the EU, he answered: “Punish? Certainly not.”

But Britain's Leave.EU group was scathing. A tweet on its official account next to an image of the Eiffel Tower read simply: “RIP France”.

Another referred to France's surrender to German forces during World War II. “The French rolled over in 1940. This time they've saved Germany the fuel and bullets,” it said.