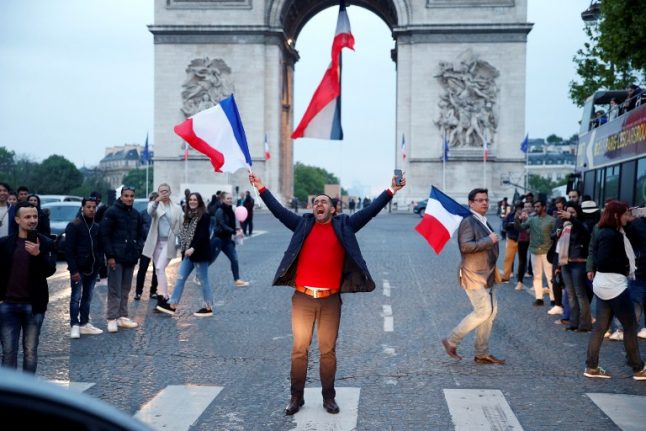 Photo: AFP
The following results are based on 99.99 percent of the votes being counted, and come from the interior ministry.
Macron gets 66 percent of the vote
Emmanuel Macron won 66.1 percent of the votes, leaving Marine Le Pen with 33.9 percent. That was a much bigger gap than the last polls suggested which had Macron at 62 percent.
Over 20 million vote Macron
The interior ministry reports that 20.7 million voters chose Macron, while Le Pen got 10.6 million in total. That's a record score for the National Front, beating their previous record of 7.6 million, that was achieved in the first round vote.
And to put it in more perspective, Marine Le Pen achieved almost double the number of votes her father did in 2002 (5.5 million) when he reached the second round.

Macron's 20.7 million votes puts him well ahead of the 18 million who voted for François Hollande in 2012 and the 18.9 million who voted for Nicolas Sarkozy in 2007. However neither of those candidates were up against a far right candidate who went by the name of Le Pen.
In 2002 Jacques Chirac gained 25.5 million votes when he was up against Jean-Marie Le Pen, so far more than Emmanuel Macron did against Le Pen's daughter.
Polls also show that Macron has hardly been swept to power on a wave of popularity. According to an Ipsos survey as many as 43 percent so around 9 million voted for him just to block Le Pen.

Abstention at 25.38 percent
According to official results, the abstention rate stood at 25.38 percent – the highest since the presidential election in 1969.
That means some 12 million voters did not vote in the election, three million more abstainers than in 2012, when the turnout was 80 percent.
Among the abstainers it was the young (34%) and the unemployed (35%) who had the highest abstention figures.
Four million cast blank votes
The interior ministry reported a record number of blank and invalid ballots, accounting for 8.49 percent of all registered voters, compared to two percent in the first round.
So that means four million French voters went to the polls to cast a blank vote. That's two million more than in 2012.
So adding the blanks to the abstentions, a third of French voters declined to choose between Macron and Le Pen — a record rate in nearly half a century.
In other words out of 47 million voters, some 16 million declined to cast a vote for either candidate. That's compared to 11 million in 2012.
“That would make a total of one French person out of three who decided not to choose between the two candidates. It's really a lot for a presidential election,” Anne Jadot, political science professor at the University of Lorraine, told AFP.
Le Pen in third place overall
So if we look at the votes overall Marine Le Pen actually finished in third place on Sunday, behind Macron and abstentions/blank votes.
Macron picked up 43.6 percent of the vote (20.7 million votes), ahead of the 34 percent (16 million votes) who did not vote for either candidate and Marine Le Pen who won 22 percent (10.6 million votes) of the vote.

The scores registered for Macron, Le Pen and for abstention in the second round of the French presidential election pic.twitter.com/9BCaamP5qR

Here's a chart from France Info. Here's a breakdown by arrondissement of the percent of Macron backers. Le Pen only won two departments
Macron won the majority of votes in all but two of France's departments. The two that Le Pen won – Pas de Calais and Aisne – in dark purple below, were both in the far north former Socialist stronghold. SEE ALSO: The maps and graphs that tell the story of Macron's win