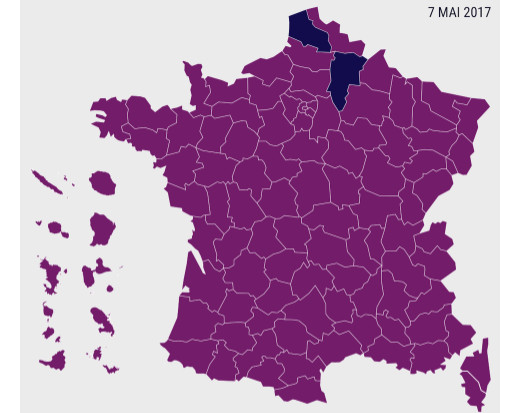 What was voters' main reason for opting for Macron?

43% of respondents in an Ipsos poll said they were mostly voting against Le Pen. This shows the strength of the so-caled “republican front” of voters coming out to defeat the far right. That said, opposition to a Le Pen was much stronger when Jacques Chirac trounced Jean-Marie Le Pen (82%-18%) in 2002.

33% were won over by the political renewal they saw in Macron. 16% put his policies top of the list, while 8% said his personality was the main reason they voted for him.

Macron won the majority of votes in all but two of France's mainland departments. The two that Le Pen won – Pas de Calais and Aisne were both in the far north former socialist stronghold. This graph from AFP shows the results of each commune but based on the size of their population.

Anamorphic map of France's communes showing which candidate came top in each of them in the 2nd round of the presidential election pic.twitter.com/zpNPc5uOhw

Most of the country gave Macron more than 50% of the vote, as evidenced by this yellow mass.

Map on basis of 90% of communities counted. Not really such a “divided France” as Le Penists claim (and media uncritically repeat). pic.twitter.com/7BvaCY7W7M

In Paris Macron won the vote in each arrondissement very convincingly. But Marine Le Pen does enjoy huge support in pockets of the country, such as the department of Territoire de Belfort in northeastern France. In the small commune highlighted below, Vellescot, Le Pen took more than 71% of the vote.

You can see here in Landes in south west France, the black pockets of Le Pen support too.

Abstention rate was highest since 1969, indicating perhaps that Macron will have a tough job on his hands uniting the country.

Abstention rate was higher after May 68 — though less spoiled votes. But looking at that level of cleavage @AFP pic.twitter.com/zarkBocdcf

So why did a quarter of voters abstain?

31% of those who stayed away said they completely rejected both candidates. This rose to 50% for supporters of far-left candidate Jean-Luc Mélenchon, who controversially refused to ask his voters to back Macron in the second round.

The age gap: Macron proved an especially attractive prospect for 18-24 year olds and people aged 60+. Le Pen made inroads with the middle-aged.