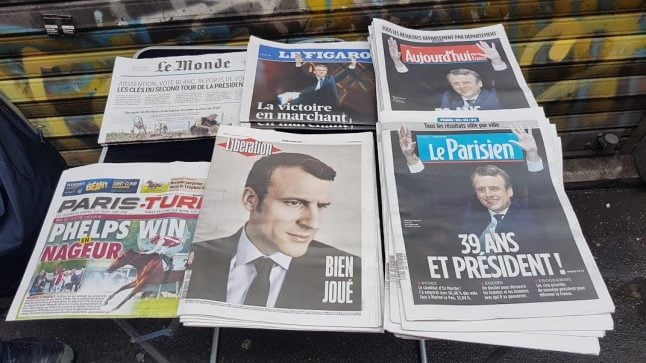 Photo: The Local
An early edition front page of Libération, the left-leaning French newspaper, simply declared “Well played,” alongside a portrait of Macron.

Le Pen's face was on the back side of the paper with the words “”bien fait” which could roughly translate as “serves you right”.
Centre-left Le Monde's website carried Macron's picture in the foreground, with defeated rival Le Pen in shadow. “I will defend France, its vital interests. Its image,” its headline quoted him saying.
Its afternoon cover shows Macron walking to the podium at the Louvre, with the headline “The triumph of Macron, the challenges of the president”.

An editorial on its website noted that nearly 11 million people still voted for Le Pen.
“We avoided a clinical death on Sunday but the disease remains,” it wrote.
“It would be a shame not to rejoice. However, we'd be wrong to indulge ourselves in glee or hubris, wrong to forget the very real threat against which we have been able to mobilize ourselves and, above all, to ignore the root causes of this threat,” it warned.
Le Figaro's headline was “Victory while marching”, a play on words for Macron's party name En Marche! (which means On the march!).
L'Express went with a French/English headline, simply writing “LE KID” beside a picture of Macron, presumably in reference to the fact that the 39-year-old is the youngest president in France's modern history.
Catholic paper La Croix called Macron's win “A large and fragile victory”.
An editorial on its site warned: “The first round of the presidential election has revealed a profound anger in our country, captured by the National Front and by Jean-Luc Mélenchon's La France Insoumise. To bring answers is an authoritarian emergency for the head of state.”
Economic liberal newspaper Les Echos went with the front page of “The France that dares” together with a picture of Macron giving a peace sign.
Conservative newspaper Le Point ran with the front page of “Le Président”, and its website ran an editorial calling Macron “a fragile hope“.
“By electing this man, France has given itself a chance to revitalize itself,” it wrote.
The editorial praised the “respect and tolerance” that Macron showed in his victory speech.
“On several occasions he expressed his willingness to protect us and to serve us, and even to serve us with love. He stigmatized hatred and praised respect and tolderance,” it wrote.
“We rarely hear this kind of vocabulary from a politician.”
In L'Obs magazine Mathieu Croissandeau laid out the challenged Macron faces.
“After making the unthinkable happen, Emmanuel Macron must succeed in making the impossible happen,” he wrote.

French media wasn't all positive, of course. The conservative and Catholic Valeurs newspaper running with the front page “Five more years. With Macron, will the Hollande nightmare continue?”

And the far-left L'Humanité newspaper went with the front page: “A new fight is starting”.
“Less protection for workers, more liberties for CEOs and finance…” it added referring to Macron's pro-liberal economic policies.

SEE ALSO: Here's how the French voted (and didn't vote)