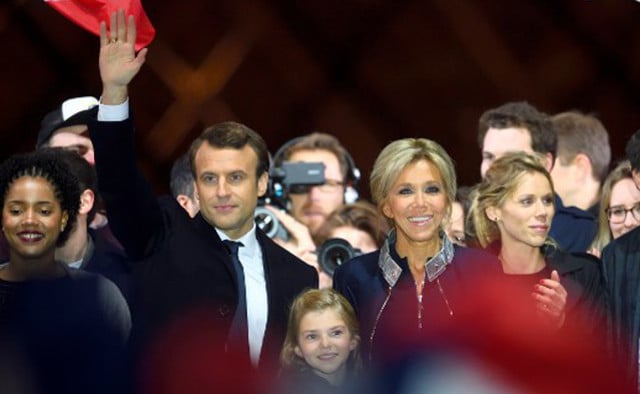 All photos: AFP
While his supporters were jumping for joy at the Louvre and commentators all over the world were hailing Emmanuel Macron's victory as a triumph for liberal and centrist values, not to mention Europe.
His stunning victory in which he came from nowhere to blow the traditional left and the right parties out of the water, before convincingly seeing off the far right Marine Le Pen was rightly hailed both in France and abroad.
But the problem for Macron is that a majority of French people won't have seen it as a cause for celebration.
And although Macron should be relieved, there are a few major reasons why he should stay off the Champagne this week. Although given what he has achieved so far, would you bet against him?
1. He didn't win over the majority of French people
In the second round, 56 percent of French people either abstained, cast a blank vote or voted for Le Pen. He may have won a majority of the vote, but that doesn't make for a majority of French people.
Even in first round vote, when French people “vote with their hearts” and choose the candidate they really want, Macron didn't do spectacularly.
On April 23rd some 8.6 million people voted for Macron, out of a possible 47 million, so in reality, you could argue that only a 6th of French voters would have Macron as their first choice. But even in the first round he benefited from tactical voting.

The scores registered for Macron, Le Pen and for abstention in the second round of the French presidential election pic.twitter.com/9BCaamP5qR

2. Many of those who voted for him aren't really behind him
Of those who did vote for him, many said were doing so simply because he wasn't Marine Le Pen.
Some 33 percent of respondents in an Ipsos poll said they voted Macron because they were won over by the political renewal they saw in him.
Sixteen percent put his policies top of the list, while 8 percent said his personality was the main reason they voted for him.
However the largest chunk, 43 percent, said they were mostly voting against Le Pen. 3. Le Pen is on the move too
The far right scored a record number of votes in the first round (7.6 million) and then went and did it again in the second round, topping the 10 million mark (10.6 million to be precise).
The far right are on an upward trajectory and Le Pen is hinting at a new rebranding and strategy in her post-results speech.
To be fair to Macron he recognized this fact in his victory speech and vowed do everything to stop people voting for extremes. Easier said  than done in a divided France suffering from unemployment.
READ ALSO: Marine Le Pen may have lost this time but the French far right is on the move 4. En Marche! will have a hard time getting a majority
Macron will face a host of difficulties trying to gain a majority of seats in the parliamentary elections with such a newly created party. Without that he'll have a hard time passing the laws he wants.
The Republicans are gearing up to try and gain a majority in parliament, in which case Macron would be reduced to not much more than a figurehead of France's government.
Even if En Marche! ends up the leading party, finding another group to ally with to pass reforms will be a tough task.
Macron's MP's will face four clear blocks of opposition from Jean-Luc Melenchon's 'Unbowed' to whatever is left of the Socialist Party come June, to the Republicans and Marine Le Pen's far right National Front.
That's unprecedented in French politics.
And on top of that, En Marche is under-financed and unlike the long established parties, it doesn't have a long-standing coffer to dip into.
5. Parts of the country rejected him
Le Pen's strongholds in the north east held firm, gaining 57.42 percent of the vote in Calais and 61 percent in Hénin-Beaumont. In the Aisne department, Le Pen came out on top in 619 out of 804 communes.
Le Pen scored well on France's Mediterranean coast in the south east, getting close to 50 percent in many departments, like the Var, where she gained 49 percent. 6. He could be doomed to follow in Francois Hollande's footsteps
Macron has a lot on his shoulders, knowing that if he fails to get results on issues like unemployment during his five years he could see the same fate as Hollande, who was so unpopular in France he became the first French president not stand for a second term.
Many French people already see too much of a similarity between Macron and his predecessor. Le Pen dubbed him “Hollande's baby” or “Hollande's heir”.
Fail to deal with unemployment and he will end up having more in common with his predecessor than he would have wished. 7. Unions are already on his back
Worker's unions in France aren't about to let Macron forget the huge opposition against him, despite the win.
Already there have been protests, with a demonstration against the election held at la Republique in Paris on Monday organised by Front Sociale, a collective of worker's unions and associations.
The CGT's Michael Wamen said: “He is no an elected president, he is like a president-CEO.”
If Macron wants to reform labour laws – and he said he will do by decree – then he can expect more uprisings in the months and years to come. 8. His to do list
Has an incoming president ever had so much on his to-do list from day one?
Macron must try to reconcile the country, cut unemployment, restore faith in Europe, even reform the EU, boost the economy, deal with the terror threat and dangerous jihadists returning from the Middle East, find a way for France to be ease with Islam and immigration, help forge a new identity for the country so it feels at ease with its place in the world
In other words make France feel great again.
Yikes, Bonne Chance Manu!
By Rose Trigg