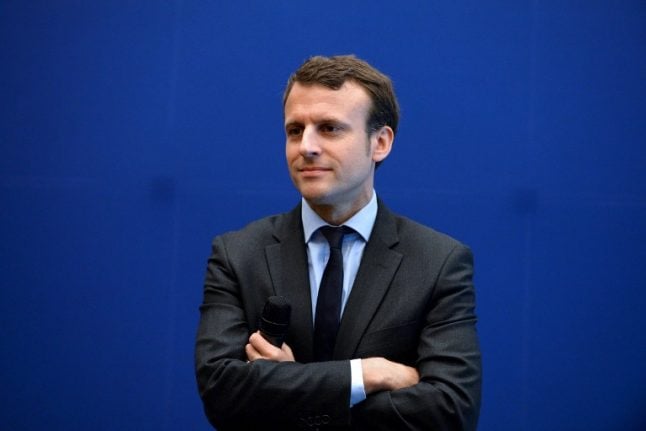 All photos: AFP
Even if the world's sixth-biggest economy is still weighed down by fundamental weaknesses, it has been enjoying a breath of fresh air recently.
Growth is on the up, private sector activity is expanding, consumer sentiment is positive and even unemployment appears to be heading downwards, despite a small rise in March.
Macron has proposed cuts to France's heavy burden of state spending and wants to loosen the rigid labour laws that many believe push up joblessness and hobble investment. He also wants to extend social protection to the self-employed.
Hardly surprising then that Macron's victory over far-right candidate Marine Le Pen on Sunday is being hailed by advocates of liberalist economics, free trade and European integration.
German Chancellor Angela Merkel said Macron “carries the hopes of millions of French people and also many in Germany and across Europe”. “Market-friendly, pro-reform” –
But the success of what analysts at Morgan Stanley dubbed “Macronomics” to describe the incoming president's “market-friendly and pro-reform” and “moderate and incremental” agenda will depend on legislative elections in June, analysts say.
Critics have noted that Macron's victory was in some ways more a vote against Le Pen than an expression of support for his reformist policies.
The 39-year-old former investment banker inherits a country still in a state of emergency following a string of Islamist-inspired attacks since 2015 that have killed more than 230 people.
And his economic agenda, in particular, is likely to face fierce resistance from leftist opponents.
When he was economy minister, the country flared up last summer as the Socialist government of which he was part forced through new watered-down labour laws, blocking fuel depots and halting trains and planes.
Indeed, there is some scepticism about Macron's ability to win a majority with candidates from his centrist En Marche movement alone, meaning he might have to form a coalition.
“While politicians in Europe let out a collective sigh of relief, what the result can't disguise is the level of voter dissatisfaction in France as a whole,” said Michael Hewson, economist at CMC Markets.
“Nearly half the French electorate still voted for parties who ran on an anti-globalisation ticket.”
“It's all well and good running on a ticket of cutting 120,000 public sector jobs, a 60-billion-euro cut in public spending and a lowering of the  unemployment rate to 7.0 percent, (but) it will be another getting it through the French parliament,” the expert said.
Nonetheless, there were indications that the traditional right-wing Republicans party would “support most of his economic policies,” he added.
The crunch test for “Macronomics” will come in the two rounds of voting in the legislative elections.
Candidates from the two parties that have traditionally dominated French politics for decades, the left-wing Socialists and the Republicans, were knocked out at the first-round stage of the election for the first time since 1958.
And while a number of their leading figures rallied behind Macron, his “En Marche” movement, founded just a year ago, has never fought a legislative election.
Le Pen's National Front (FN) party is likely to greatly increase its share of parliamentary seats. Ballot box test
The legislative vote “is crucial”, said IHS Markit analyst Kit Nicholl.
“To govern effectively, Macron needs the backing of a parliamentary majority (289 seats or more), but the chance of his movement being able to build one, from zero seats, appears slim,” the analyst said.
However, Laurence Boone of AXA Investment Managers, who like Macron was an economic advisor to outgoing president Francois Hollande, believes Macron has a good chance of building a majority.
Despite the “very unusual character” of this election, “historically, the French tend to favour the party of the elected president,” she said.
She suggested three scenarios: En Marche would win either an absolute or a relative majority, or the right-wing Republicans would secure a majority and push through their own agenda.
All three cases would reassure international investors because they would enable structural reforms to be implemented, strengthening France's growth potential, Boone said.