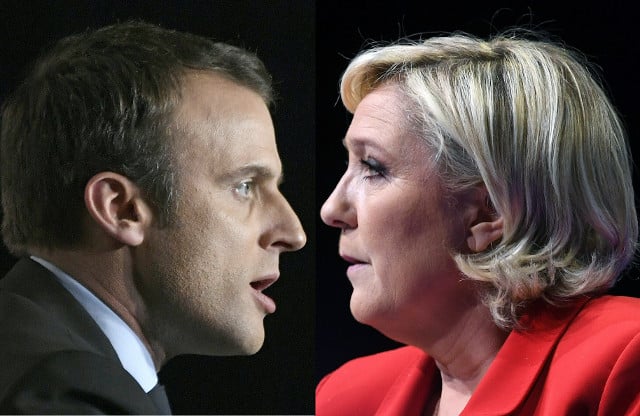 All photos: AFP
Earlier in the election campaign French geographer and author Christophe Gully was asked to describe what a Le Pen vs Macron run off would mean.
“It would be perfect. It would be chemically pure. It would be a battle for France,” said Gully whose book Peripheral France looked at the impact of globalisation in France's forgotten towns and the subsequent rise of Le Pen's National Front.
Europe
Le Pen has long insisted on the need for France to drop the euro single currency and return to the franc, and also leave Europe's Schengen visa-free travel zone.
She has predicted the EU “will die” and has vowed to hold a “Frexit” referendum on France's membership of the European Union.
Le Pen wants to abolish an EU directive allowing companies in one EU country to send their workers elsewhere in the bloc, and opposes the CETA trade deal between the EU and Canada. Macron, a former banker and economy minister who ran on an unabashedly pro-European campaign, wants to bolster the eurozone by setting up a separate budget for the 19 countries that use the common currency.
He also proposes giving the zone its own parliament and finance minister.
Macron also wants Europe to strengthen is external borders by setting up a common border force, pool more of its defence forces and impose higher tariffs to protect European industry from unfair competition, particularly from China.
He is generally supportive of international trade deals and he backs the treaty with Canada.
Economy
Emmanuel Macron wants to cut corporation tax for businesses from 33 percent to 25 percent.He also wants to make budget cuts of €60 billion to help maintain France's commitment to meet the EU deficit limit of 3 percent of GDP.
He proposes a €50 billion public investment programme for environmental measures and digital innovation.
Le Pen wants “intelligent protectionism”, including favouring French firms in public sector contracts.
She also wants to free up loans for small businesses by lowering interest charges.
Immigration
Le Pen has pledged to reduce net immigration — the difference between the number of people arriving and leaving — to just 10,000 and has vowed a “moratorium” on legal immigration.
She would make it harder to qualify for asylum and curtail policies that let migrants bring relatives to France, while also making it impossible for illegal migrants to secure residency status.
Foreigners convicted on terror charges or any other crime would be automatically deported, and she would abolish a law that allows children with migrant parents who are born in France to eventually become French. Macron has pledged to speed up the review process for asylum requests to a maximum of six months, including appeals.
He has praised German Chancellor Angela Merkel over her generous policy to asylum seekers that has seen more than a million new arrivals since 2015.
Macron wants to create a 5,000 strong border guard force and make fluency in French the most important qualification for gaining French nationality.
Islam
Apart from Europe and immigration Marine Le Pen's other big obsession is Islam. She says “radical Islam would on the move” ( a play on the name of Macron's movement En Marche! if her rival was to be elected.
She regularly warns against the “mortal danger that fundamentalist Islam”.
Macron on the other hand has accused Marine Le Pen of stigmatizing and trying to make enemies of France's five million Muslims.
Le Pen has insisted recently she believes ordinary Islam is compatible with the French Republic but one of her stand-out pledges is ban the wearing of “ostentatious” religious symbols, most notably the Islamic headscarf .
Macron has not said he wished to extend the headscarf ban, forbidden in schools and public buildings since 2004, to all public places. On the ever divisive issue of the Burkini, Macron says it is a “public order issue”, meaning there should be an outright law to ban it as Le Pen wants.
Le Pen says she wants to dissolve certain Muslim organisations in France, while Macron says he wants to help Muslims build a new “French Islam”.
Identity
Marine Le Pen wants foreigners and immigrants to assimilate to France and French culture and not just integrate. Macron on the other hand has welcomed cultural diversity and pluralism.
For Le Pen it's either you adopt French culture or you go home, but Macron famously said “there is not a French culture, there is culture in France and it is diverse.”
While Le Pen believes French culture and identity are threatened by mass immigration, Macron is happy to celebrate the diversity.
Labour and retirement
Both candidates have said they would keep France's 35-hour work week, adopted by a Socialist government in 2000, but Macron would undercut it by allowing companies to negotiate new working practices with their employees.
Le Pen wants to lower the retirement age to 60 years old from 62, while Macron wants to unify a complex web of retirement rules for various public and private-sector employees, while maintaining the current retirement age. File picture of pensioner protesters in Marseille.
He also wants to suspend unemployment benefits for qualified workers who refuse two “decent” job offers.
To rein in the budget, Macron wants to cut 120,000 civil servant jobs, though hospitals would be spared, while also creating 10,000 police jobs and 4,000 to 5,000 teaching posts.
Le Pen advocates more civil servant jobs at the national level and for hospitals, but fewer jobs managed by French regional authorities. She also wants 21,000 more police and customs officials.
Security
Macron has vowed to increase police numbers by 10,000 while Le Pen says she will another 15,000 officers to France's police force.
When it comes to prisons, Macron proposes 15,000 new beds, Le Pen 40,000.
While Macron proposed an EU defense fund for joint missions, Le Pen wants to pull France out of Nato and increase troop numbers by 50,000.
Taxes
Le Pen would impose a 35 percent tax on goods by companies which move production outside France, and would place a tax on the hiring of foreign workers so the French would get priority.
She would cut income taxes by 10 percent for the lowest-earning households, and would drop France's plan to withhold income tax from monthly earnings starting next year — currently French pay tax on income the year after it is earned. Macron wants a three-year suspension of housing taxes for 80 percent of French households.
He also wants to turn France's so-called “solidarity” wealth tax on people claiming more than 1.3 million euros ($1.4 million) in assets into a tax on real-estate wealth, which would exclude financial assets.
Le Pen has said she would leave the wealth tax untouched.
READ ALSO: Macron vs Le Pen: A deeply divided France set for an almighty collision