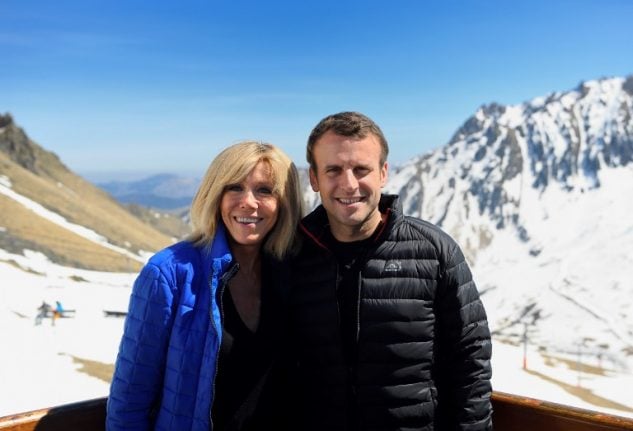 The couple on a campaign trip in the Pyrenees. All photos: AFP

If you don't know the full story yet (read it here) – France's new president Emmanuel Macron married his former high school teacher, Brigitte Trogneux, who is 24 years older than he is.

And they're not camera shy. Here's a glimpse of their lives together.

Here's one of their first moments together, showing a 15-year-old Macron kissing her cheek at school.

24 year ago… Macron met Brigitte when he was 15 pic.twitter.com/RKBYaQj9eZ

A more recent kiss was after Macron was announced as the winner of the first round of the presidential election. And they clearly don't mind a good smooch on public. Typically, the pair have been quick to invite the press along for photo opportunities, whether it's a stroll in the park… … or on a ski lift during a campaign visit to Bagneres de Bigorre in France's south west. The couple appeared in the Paris Match magazine in August last year, but the public's attention wasn't drawn to the cover picture, seen here.

No, it was the full page spread in the middle of the magazine, which featured a passing nudist (see tweet below). In fact they have regularly featured on the cover of gossip or celebratory magazines. Of course, Macron and Trogneux are much more likely to be snapped on the political scene – and she is rarely far from his side. In fact, considering current president Francois Hollande is quite private about his personal life, and considering Marine Le Pen is too… this is the political couple you're most likely to see in the French media. They even vote together. Two more votes for Macron here. Here they are celebrating Macron's win in the first round of the French elections.