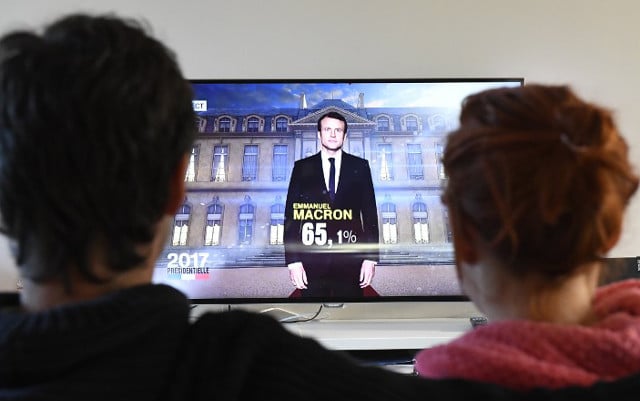 All photos: AFP
2004: Graduates from elite “French President's” university
Macron's path to the presidency can perhaps be traced back to when, after gaining a degree in philosophy and a masters in public affairs, he was accepted into the Ecole Nationale d'Administration (ENA), one of the most prestigious universities in France.
ENA as it is known in France is dubbed the training college for French presidents given that three previous heads of state: Valéry Giscard d'Estaing, Jacques Chirac and François Hollande all passed through ENA before making it to the Elysée.
Most who walk the corridors of ENA end up in the high echelons of the public and private sector and once the ambitious Macron graduated in 2004 he knew he was on his way to the top.
2004 to 2012: Makes his money
Macron started his working life as a finance inspector at the Inspectorate General of Finances in the Ministry of Economy from 2004 to 2008.
That spell included a year working under Jacques Attali, one of Macron's current closest advisors and mentors as  deputy rapporteur for the Commission to improve French economic growth.
But in 2008 Macron paid €50,000 to buy himself out of his government contract so he go into the private sector, despite the warnings from friends.
He became an investment banker at Rothschild & Cie Banque, with some close to him warning that earning millions as an investment banker could scupper his chances of a life in politics.
But he ignored them and went on to earn €2.9m for his role advising Nestlé on its $12billion acquisition of a unit of Pfizer in 2012 as well as the nickname the “Mozart of Finance”.
Even though Macron was targeted by rivals for his past in banking and was dubbed “the candidate of finance” by Marine Le Pen, his stunning victory in the presidential election proved he was right to ignore the warnings from his friends. One of the earliest AFP images of Macron, taken in 2012.

2012: Becomes official advisor to President Francois Hollande
Macron already had experience of what it took to become a president. Whilst he was still a banker he worked with François Hollande as an unofficial adviser to help the future president win the Socialist party's nomination for the 2012 election.
After Hollande was elected Macron was officially made the president's deputy chief of staff at the Elysée palace.

He lobbied for pro-business reforms, and acted as Sherpa at G8, G20, and European summits.
The pair didn't always agree, notably over Hollande's 75 percent tax on the country's most wealthy. Macron called it “Cuba without the sun”.
Macron eventually quit after getting frustrated at the lack of pro-business reforms, but he had left his mark.
When Macron left his role, Hollande spoke at his going away party, joking that “I often introduce myself, when I'm abroad, as the man who works with Emmanuel Macron.” August 2014: Becomes Economy Minister
But then the summer of 2014 Hollande was forced to deal with an internal rebellion in his government who disagreed with his shift to economically liberal reforms.
To everyone's surprise Hollande took a gamble on Macron, who up until that point no one outside of Rothschild and the Elysée had really heard of him.
His appointment had the media desperately hunting for information on him. This is what we came up with way back in the summer of August 2014: Ten facts about France's economics whizzkid
As economy minister Macron will be remembered for his controversial reforms, known as the “Loi Macron”, the flagship change being the softening of France's restrictions on Sunday shopping. The reforms also opened up certain sectors of the economy like coach travel.
So unpopular were the reforms that they sparked protests in France and among Socialist party rebels who refused to back it.
Macron's time as minister was marked by his frequent straying from the traditional party line by questioning sacrosanct socialist policies, like the 35-hour week and fortune tax which infuriated his colleagues.

But Macron did not seem to care as distancing himself from unpopular government seemed part of his grand plan.

“He knows exactly what he is doing,” French political expert Bruno Cautres told The Local at the time. April 2016: Launches En Marche! movement
While still Economy Minister, Macron made the first move that got the rumour mill turning about his potential plans to run to be France's next president.
In April last year, in his home town of Amiens in northern France, he launched the En Marche! party, which he defined as “neither right, nor left”.
Macron has never claimed to be a socialist, even though he was a member of the Parti Socialiste between 2006 and 2009.
His aim, he said, was to win over a majority of French people to “new ideas for the country” that could be implemented in the future.

“That's the only ambition one should have. It's radical, it seems a bit crazy talking about it tonight, but there is such energy in the country!” the fresh-faced minister said. A sign of his positive vision for France which helped him win over so many voters during his campaign.

But when he told he supporters at a summer rally that he would lead En Marche! “to 2017 and to victory”, it felt it was only a matter of time before he would quit the government… Aug 2016: Quits the government
Macron announced his resignation from government at the very end of August – four months after launching En Marche! – confirming to most that he was indeed planning to make an audacious bid for the Elysée.
He said at the time that he had seen “the limits of our political system.” Macron held a 40 minute meeting with Hollande,who accepted his resignation. It is unclear whether he made Hollande aware at the time that he intended to replace him as president.
In a statement Hollande tried to give the impression he was in control but even at this point it was clear Macron was in charge of his own destiny.
“In a government, there cannot be any personal initiatives and even less presidential ones,” Hollande said.
While French business leaders lamented the loss of a minister “who understood them” unnamed members of the ruling Socialist party labelled him a “traitor” and a “deserter”. November 16 2016: Announces he is running for president
Three months after quitting the government, Macron finally declared his bid for presidency – which at this point was hardly a surprise to anyone.
“We can't respond with the same men and the same ideas,” Macron said as he launched his bid at a jobs training centre in a gritty Parisian suburb.
He said he wanted to “pull France into the 21st Century”.
“I'm ready, that's why I am candidate for the French presidency,” said Macron.
November 2016/ January 2017 – The boulevard to the Elysée opens up
Of course all presidents are at some point lucky presidents and that was the case for Emmanuel Macron when the resutls of the right wing Republican party primary the left wing Socialist party nomination both went his way.
With the Republicans opting for right wing social conservative François Fillon rather than centrist Alain Juppé and the Socialists choosing true leftist Benoit Hamon over centre left Manuel Valls, the fertile middle ground opened up for Macron.
And he set about conquering it.
February 1, 2017: Surges past Francois Fillon in the polls
This was the moment when it looked like Emmanuel Macron could actually pull off his gamble.
Republican candiate Francois Fillon, dogged by scandals over alleged fake jobs, could only watch as Macron whizzed by him in the polls. In a couple of weeks he went from around 15 percent to 24 percent.
Fillon continued to slump and although he never fell below 19 percent he would never gain back the ground.
Macron, for his part, eventually ends up leading the polls ahead of far-right Marine Le Pen. April 23rd, 2017: Wins the first round of the presidential election
With 24 percent of the vote, Macron won the first round of the election, advancing to the second round together with Marine Le Pen at 21.3 percent.
But the fact he finished above Le Pen by a clear margin gave him the momentum and legitimacy that he needed and left the far right disappointed. May 3rd – Puts Le Pen to the sword live on TV
Macron's second round campaign had started slowly and he was accused by many of already thinking he had his hands on the keys to the Elysée.
But on the evening of May 3rd he showed no signs of complacency as he went head to head and toe to toe with Le Pen in a live TV debate.
He repeatedly accused Le Pen of talking nonsense and having no programme and viewers agreed, declaring him the clear winner while Le Pen was ciriticized by all, even by her own father, for being too belligerent.
Macron's steady performance proved to many he was the only candidate with the stature to be the next president of France. Fears that Le Pen could pull off a shock win, drained away.
May 7th, 2017: Wins second round of the election and becomes president of France
Macron makes history by beating Marine Le Pen in the second round of the election to become the youngest president of France. His route to the top may not have been typical, but it evidently worked.

Macron's time as minister was marked by his frequent straying from the traditional party line by questioning sacrosanct socialist policies, like the 35-hour week and fortune tax which infuriated his colleagues.