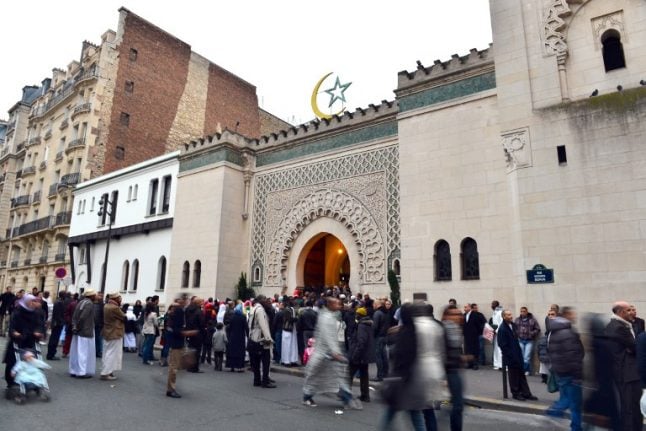 Muslims arrive at the Grand Mosque in Paris. Photo: AFP

The name Marine Le Pen is routinely preceded by the words “anti-Islam”.

Even though she herself has moved to soften her image with Muslim voters by insisting their religion is indeed “compatible with the French Republic” (much to the disgust of some in her party), it’s not hard to see why she has a reputation for being an Islamophobe.

She once described Muslims praying in the streets of French cities in protest over a lack of mosque space to being akin to the Nazi occupation and has regularly taken aim at halal food, the veil, the burkini, and various other aspects of Muslim culture.

The grand mosque in Paris is taking no chances on her, and urged voters last week to vote “massively” for Emmanuel Macron, saying his campaign “promises to be decisive for the future of France and its religious minorities”.

But even though Macron is leading in the polls by over 20 points, no one is ruling out a Le Pen victory, and you may think this would have France's Muslim community, believed to number between four and six million, in a panic.

But while there is no doubt concern, there are reasons why France's Muslims are not all frantically preparing for the worst. 1. Because many voters distrust others as much as they do Le Pen

When The Local talked to worshippers at a mosque in north east Paris before the first round of voting, not one singled Le Pen out as being worse than the other candidates.

Amadou, 57, said: “It's true that Marine Le Pen is an Islamophobe, but they all are, so what's the difference? She is the only one who will talk about it openly, while the rest of the candidates are Islamophobes but just keep it inside.”

Many Muslims in France feel the country’s politicians and political parties across the spectrum all resort to Muslim bashing in order to try and win votes, leaving many disinterested in politics altogether.

Henni-Moulai, the founder of the website Melting Book, which aims to amplify minority voices in the media, believes Macron will fall into the same trap as other politicians at some point.

“Muslim bashing is inescapable, especially if you want to reach the Elysée palace,” she told Al Jazeera news site. 2. Because Muslims, like many French voters, just feel disenfranchised altogether

As Mohammed Moussaoui, the president of the Union of France’s Mosques, told The Local, Muslim voters are first and foremost French citizens like other voters, which in 2017 means the same anger, apathy and indifference towards politics that has afflicted other sections of the population has also seeped into the Muslim community.

In 2012 some 86 percent of France’s Muslim population voted for François Hollande and like other Hollande voters, particularly the working classes, many feel let down over the lack of real change.

So even the threat of Le Pen is not enough to motivate them to vote, and with France set for record abstention rates, its clear the country's Muslims are not the only disenchanted ones.

At the mosque in the 19th arrondissement of Paris, a middle-aged man named Ismail, originally from Algeria, told The Local he would not be voting.

“Many of the people here at the mosque aren't interested in politics. People here feel mistreated, they think the politicians are all hypocrites, why would they vote?” he said. 3. Because they know there are safeguards even if she wins

Even if Le Pen does pull off the type of shock populist win that led to Brexit and Trump, Muslims are confident that France’s constitution and its political institutions will hold her back from doing exactly what she wants.

For a start Le Pen’s party, only having two MPs currently, is unlikely to gain a majority in the parliamentary elections in June and without a majority in parliament she will find it difficult passing any of the reforms she plans, including banning Muslim women from wearing the headscarf in public places.

“Muslims, like other French citizens, will have confidence in the country's institutions that will put limits on her power,” Mohammed Moussaoui from the Union of France’s Mosques told The Local. “There is the constitutional council which makes sure all laws are in line with the French constitution,” he said.

“It will be hard for her as president. She will need the ability to unite people, which will be difficult for her,” he added, pointing to the fact that other parties are unlikely to enter into coalition with Le Pen.

His view was backed by an Algerian-born Muslim named Ismael, who told The Local:

“Even if she does win it doesn't matter. I'm not scared of her. Why would I be scared of her? It's not as if she will have the power to change laws and make life difficult for immigrants or Muslims. That's why they have the constitution and the National Assembly.”

People leaving the mosque in the 19th arrondissement of Paris. Photo: The Local

4. Because Le Pen has successfully softened her image… even with Muslims

Le Pen has made big efforts to soften the image of her party – which under her father Jean-Marie (see photo below) was seen as a bastion of racists and colonial settlers returning from Algeria as well as apologists for the wartime Vichy regime's collaboration with Nazi Germany.

Recently she has been at pains to point out that she is not anti-Islam but anti-Islamic fundamentalism and extremists.

As she tries to widen her appeal and make herself more electable she has tried to appease fears among Muslims by stressing she feels Islam is perfectly compatible with the French Republic, a quote that did not sit well with many of her party members.

Rachid, an Algerian-born man in his thirties, told The Local: “I'm a Muslim but I'm not against Le Pen. I honestly don't think she is actually racist – she is just against anyone who is causing problems. I don't think it matters if they're Muslims, refugees, from the Roma community, the yobs….that’s why a lot of people in France are uniting with her.” 5. Because some Muslim voters will actually back Le Pen

Mohammed Moussaoui said the Muslim community, like the rest of France, is made of up of voters of all political persuasions, even those who will vote for Marine Le Pen.

According to Le Point magazine some 4 percent of Muslim voters opted for Le Pen in the first round of the 2012 election, but that number is expected to have jumped this time round as the taboo around the party has fallen.

These voters often find extremist Islam and communalism as distasteful as Le Pen does and her talk of cracking down on crime and battling globalisation appeals to voters in poor, peripheral areas, Muslims included.

Some Muslim voters may be enticed to Le Pen over her desire to scrap the gay marriage bill, which many protested against in 2013.

“We'll tell them they're as French as the others,” was the message and observers say the National Front allows those Muslims who feel French first and foremost to express their identity. 6. Because many still believe she won't win

But while no analyst will rule out a Le Pen win, there are reasons why it's still highly unlikely to happen.

… But let's not pretend no one is worried.

Despite all this it would be wrong to say the Muslim community were not at all concerned about the thought of Marine Le Pen taking power.

Slimane Nadour, head of communication at Paris’s Grand Mosque said the community was concerned by the election and the prospect of a Le Pen victory.

“Today, we are a little afraid, of course, of having a National Front with Marine Le Pen that's very strong.”

“There's a push towards extreme right and xenophobic parties across Europe, but especially in France and obviously, French Muslims are worried.”

“Le Pen says Nous sommes chez nous (this is our home), but this is our home too. And we want to feel at home, and be on good terms with everybody no matter their religion or beliefs.”

The Grand Mosque is ready to take an unprecedented step if Marine Le Pen, as expected, makes it through to the second round run-off vote.

“If in the second round there's a risk of the Front National winning, we may call on French Muslims to vote against Le Pen.”

“People are scared at the moment, in this climate of xenophobia and Islamophobia.”