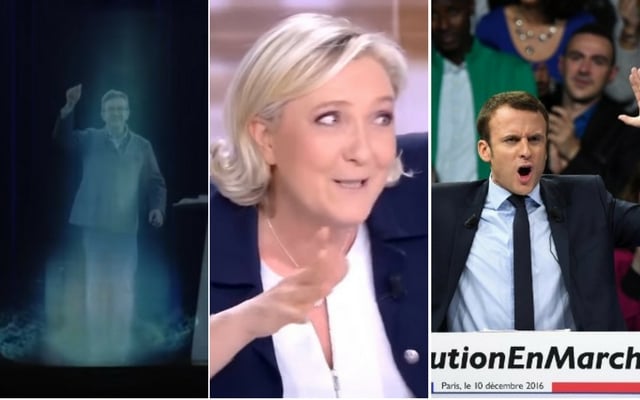 Photo: LCP, TF1 and AFP.
There were shocks even before the 2017 campaign really got underway.
Current president François Hollande made history when he became the first president not to run for a second term in office. And a man named Emmanuel Macron caused a stir when he announced he was running in December. Although no one really thought he had a chance of winning.
But that was before all this happened…
1. Surprise primary wins
Both the Socialist and Republican parties' primary elections turned out surprise winners, with “leftist rebel” Benoît Hamon easily beating ex-PM Manuel Valls and “dark horse” François Fillon seeing off one-time favourite Alain Juppé and ex-President Nicolas Sarkozy to become the Republican candidate. Photo: AFP
2. Macron turns up the decibels
At his first big meeting of the campaign on December 10th, Macron, still considered an outsider, turned heads when he got a little overenthusiastic, roaring his final few lines at the top of his voice: “What I want is that you, everywhere, you're going to make this win, because it's our project. Long live the Republic!”.
Although the crowd went wild, the clip has gone down as a bizarre and widely mocked moment in the campaign, with many suggesting Macron's stance was “almost Christ-like” and his over-the-top delivery was reminiscent of a scene from the film Wolf of Wall Street.
And of course, it provoked countless parodies online (see the speech below set to music from Lord of the Rings).
Socialist candidate Benoît Hamon even appeared to be poking fun at his rival in this picture.

3. Penelopegate and Fillon's press conference
Who could forget Penelopegate, probably the defining moment of the campaign which saw Fillon go from pollster's firm favourite to an “also ran” over charges of giving fake jobs to his wife and children, which all began on January 25th when newspaper Canard Enchaîné revealed the story.
Within the whole affair, a key moment was Fillon's combative press conference when he came out vehemently denying claims and refusing to step down as a candidate. At the time critics thought it was “political suicide” to continue, and they were right.
While being a serious affair, it nonetheless provided ample ammunition for jokes, one of the strangest stories being when satirical site Le Gorafi started a joke crowdfunder to raise money for the wealthy candidate to help make ends meet, but people actually donated and the campaign gained over €3,000. Le Gorafi said they would give the money to local charities in Sarthe where Fillon has his chateau. Photo: AFP
4. Le Pen refuses to wear headscarf to meet top cleric
When meeting a top Sunni Muslim cleric in Lebanon on February 21st, Le Pen declined to wear a headscarf and was promptly accused of “improper behaviour” by the Sunni authority, but her supporters cheered the move.
Many suggested the whole thing was a publicity stunt to boost her ratings.
If it was it worked as her refusal made headlines around the world.
Le Pen explains she won't be wearing the headscarf. Photo: AFP
5. Philippe Poutou steals the show in the first round debate featuring all 11 candidates
Ford mechanic and anti-capitalist party candidate Philippe Poutou completely stole the show with his fast-talking casual style and became the centre of media and Twitter attention, all while wearing a button down t-shirt.
He launched a memorable attack on Marine Le Pen for invoking her parliamentary immunity to dodge a hearing with an investigating magistrate looking into fake jobs allegations, saying “there's no worker's immunity”.
In the video below you can see him checking with his supporters behind him for advice during the debate.
6. Mélenchon appears in hologram form
Far-left candidate Jean-Luc Mélenchon materialising on stage to give a speech in Paris (despite being in Lyon) on February 5th was an unforgettable scene in this year's campaign, and he continued to use the technique to appear in multiple places at once during his campaign.
For that, he's got to at least win the award for the most creative campaigning.
7. Comments on France's history cause uproar
The topic of French history got both leading candidates in a muddle, Le Pen sparked controversy for denying France's role in the Vel d'Hiv round up of Jews in Paris on April 9th, while Macron was attacked for saying France had committed “crimes against humanity” during the colonization of Algeria back on February 14th, something which Le Pen brought up again in Wednesday's debate.
8. Food enters the race
Fillon, Le Pen and Ex-French PM Manuel Valls all fell victim to an arsenal of baking ingredients during the campaign. First Valls was hit with flour on a visit to Strasbourg in December, then Macron got an egg to the head at the annual farming show in Paris in March.

Next Fillon was floured at his own campaign rally in April and on Thursday Le Pen was egged by protesters shouting “get out fascists”, although the missiles didn't hit their target.
9. Champs-Elysées shooting interrupts live election programme
During a live TV broadcast on channel France 2, April 21st, with all 11 candidates present, the news was broken that officer Xavier Jugelé has been fatally shot on the Champs Elysées and audiences saw the candidates react to the news live on air. This came after widespread fears that a terror attack could affect the campaign. Photo: AFP
10. Mélenchon refuses to back Macron after first round win
One of the few slight surprises in a first round vote on April 23rd that went down almost exactly as the polls predicted was when Jean-Luc Mélenchon declined to join calls from all sides of the political spectrum to vote for Macron to block Le Pen. Instead asking voters to decide for themselves what they want to do. He was severely criticized.
11. Macron's premature first round celebrations
His victorious speech, which reminded many of a presidential victory speech, piling into the crowds and election night celebration at renowned Paris restaurant Rotonde all prompted criticism that Macron was counting his chickens too soon, as well as celebrating when everyone else was talking about the National Front scoring a record number of votes. Photo: AFP
12. Publicity war in the car park of Whirlpool
The issue that took up more time than viewers thought was warranted in Wednesday's debate was the Whirlpool fiasco on April 26th when Le Pen blindsided Macron by turning up at the Whirlpool factory in Amiens where he was elsewhere meeting with union representatives.
Le Pen was applauded and posed for selfies whereas when Macron turned up he was booed and jeered.
Macron regained his footing by taking the time to speak to them, but the whole confusing debacle had already turned into a publicity war. Photo: AFP
13. May Day marches turn violent
France's traditional May 1st union marches erupted into violence this year as protesters showed their disgust at Le Pen's candidacy, and for many, Macron's too.
One particularly violent scene, captured by a photographer, showed a police officer in riot gear engulfed in flames.
It presented the picture of a divided France who were far from united to beat the National Front, as they were in 2002. Photo: AFP
14. A raucous second debate
Anyone hoping the final debate between Macron and Le Pen on May 3rd would be a civilised affair would have been sorely disappointed. Candidates hurled insults at each other and Le Pen in particular was criticised for going overboard on the attack.
A particularly memorable (or perhaps surreal) moment for many viewers was when Le Pen's “LSD trip” moment, which defies description so you should probably just watch the video below if you haven't seen it yet.

(Bonus) And here are some of the best odd and awkward moments from the campaign…
When Le Pen went on a fishing trip and tried to talk to dolphins
The entirety of Le Pen and National Front MP Gilbert Collard's day trip out with some fishermen, and a host of TV crews, was a somewhat odd moment in itself as the politicians were filmed mucking around on board on April 27th.
One clip that stuck in viewers' minds was when Collard spotted a dolphin, and Le Pen tried to call it back in its native language, imitating dolphin squeaks.
Macron self-promotes at renowned figure's grave
In an ill-thought out gesture, Macron visited the grave of actor and director Roger Hanin in Algeria on February 14th, leaving a wreath of flowers which had his own name stretched across them in large letters. Predictably, he was ripped apart on Twitter for bringing the campaign to the graveyard.
“A wreath or campaign poster?” wrote one twitter user:

Fillon dances in la Reunion
On a trip to the French island of la Reunion on February 12th, Fillon managed to forget his scandal woes and pulled out some moves, joining in a traditional Reunion dance with a woman in the crowd.