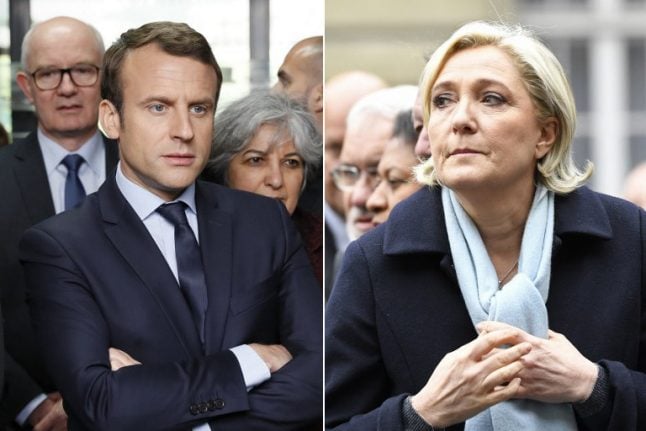 All photos: AFP
We already know that France is very divided country in terms of those who back either “France first” Le Pen or pro-Europe Macron.
Le Pen's supporters are typically young and working class (read more about them here), while Macron's are typically well educated, middle class or “the French that are doing well”, as one political analyst described them.
But it doesn't appear to be so divided among the political elite of France and indeed around the world.
Here's a closer look at the people who have issued calls to back either of the two candidates – followed by a look at those who have chosen to sit firmly on the fence, even in spite of criticism.

Those who back Macron
Not everyone who has issued a call to back Macron actually supports the candidate, remember he only got 24 percent of the vote in the first round.
Nevertheless we have lumped those who have come out clearly with a call to either support the centrist candidate or block Le Pen or stated that they would cast their vote for him.
Most politicians in France have backed Macron, albeit with varying degrees of enthusiasm.
These supporters include President Francois Hollande, who said: “What's at stake is our idea of France.”
Defeated Republicans party candidate Francois Fillon and Socialist Benoit Hamon – who were presidential candidates themselves – were both quick to say they would be voting for Emmanuel Macron in the second round.
Macron has also been endorsed by past and present members of the current government, including Prime Minister Bernard Cazeneuve, former prime minister Manuel Valls, former justice minister Christiane Taubira, Environment Minister Ségolene Royal, Health Minister Marisol Touraine, and Education Minister Najat Belkacem.
Paris mayor Anne Hidalgo called on France to vote for Macron to block Le Pen this week (see below). The Socialist Mayor of Lille Martine Aubry, who has had a few run ins with Macron, has told voters to “block Marine Le Pen”, but did not explicitly back Macron, much to the annoyance of many in her party.
Le Figaro pointed out that in 2002, when Aubry urged voters to block Jean-Marie Le Pen, she also added that she supported Jacques Chirac.
As for the French unions, the UNSA and CFDT have backed Macron and have even called on their members to protest against Le Pen.
Philippe Martinez, head of the powerful CGT union, has also called on people to block Le Pen without supporting Macron.
The largest police union Alliance has also called on its members to vote against Le Pen. The group says the National Front's “use of fear, terrorism, shameless amalgams, xenophobia, racism, sexism, nationalism, and homophobia will not do anything to solve inequalities, unemployment, and low wages.”
The FSU and Solidaires unions have also called for a block against Le Pen without specifically supporting Macron.
The grand mosque in Paris urged voters to vote “massively” for Macron, whose campaign “promises to be decisive for the future of France and its religious minorities”.
France's chief Rabbi, Haim Korsia, also supports the former banker.
“We must call on all those who believe in France to vote for Emmanuel Macron, because it is he who carries the hope of fraternity,” he said.
Celebrities behind Macron include singer Line Renaud, footballer Yohan Cabaye, comedian Bernard Montiel, actress Macha Méril, TV presenter Stéphane Bern, actors Pierre Arditi and Vincent Lindon, and singer Catherine Lara.
French football legend Zinédine Zidane said on Friday that people should “do everything to avoid” the National Front.
“These kinds of extremes are never good,” he said. Outside of France, the endorsements have been raining in too.
The European commission president Jean-Claude Juncker, who is usually neutral when it comes to elections, has expressed his support for Macron, as has the EU’s chief Brexit negotiator, Michel Barnier.
In the UK, the Labour party, the Greens, the Liberal Democrats and the Scottish National party have all shared their support too.
In the US, Barack Obama gave Macron a ringing endorsement via a 70-second video this week. Watch it below.

German chancellor Angela Merkel wished Macron “all the best for the next two weeks” while her top challenger in the upcoming German elections, Martin Schulz, has also expressed support for Macron.
Le Pen supporters
The outspoken voters for Le Pen are few enough to count on one hand. Some of them are only doing it to keep Macron out of power, too.
Christine Boutin, leader of France's Christian Democratic Party, is calling for people to vote Le Pen… although doesn't come across as her biggest fan.
“My decision is clear, and it's not Macron,” she told Le Figaro newspaper this week.
She added that a vote for Le Pen “wasn't a vote for the National Front, just a vote against Macron”.
In terms of French celebrities, Le Pen can count on the support of comedian Franck de la Personne and former actress turned animal right's activist Brigitte Bardot.
“I want her to save France. She is the Joan of Arc of the 21st century,” Bardot has said, adding that she admired Le Pen for her “desire to take France in her hands, restore its borders and give priority to the French.” Ukip MEP Nigel Farage, who has tweeted out photos of himself with Le Pen, has made his allegiance clear.
“I see Macron as the enemy,” he said (see tweet below).
“He wants Brussels to be even stronger, and I can't see that it's in our interests when the Junckers and others are all lining up to try and punish Britain,” Farage told LBC radio, referring to European Commission president Jean-Claude Juncker.

'@EmmanuelMacron is an enemy of nation state democracy. He is bad news for Brexit Britain. pic.twitter.com/SY1hSZWIkZ

Among the former presidential candidates, Le Pen has the support of fellow eurosceptic Nicolas Dupont-Aignan of the “Debout La France” (France Stand Up) party, who she has named as her Prime Minister should she win.

Across the Atlantic Ocean, Donald Trump has given what some are considering to be a tacit endorsement of Le Pen.

He said she was “strongest on borders, and she's the strongest on what's been going on in France”.

While Vladimir Putin has repeatedly insisted he would not be taking sides or meddling in the French election, perhaps this picture, taken in March tells its story of who he supports. Refusing to take sides
Those who are supporting neither are often those who refuse to back Macron publicly. They have been accused of playing a dangerous game.
Macron's centrist ally François Bayrou said: “Abstaining is a vote for Le Pen.”
The Manif pour tous group in France, which protests against gay marriage among other things, has said it's “anti Macron” because he is anti-family. The group did not pledge support for Le Pen, however.
To the anger of many on the left and indeed frontrunner Emmanuel Macron, far-left Jean-Luc Melenchon has refused to urge voters to block Le Pen's path to the Elysée by backing Macron. Although he has said told his followers not to vote for Le Pen.
This unusual move means that two-thirds of French far-left supporters won't vote for Macron. The Catholic Church in France has stayed on the fence, even though it has commented on elections in the past.
“The Catholic Church is not calling on voters to choose one candidate or another, but it hopes everyone gives every element of the election its proper discernment,” it said.
Some bishops however have come out against Le Pen, however, including Bishop of Troyes Marc Stenger.
The Force Ouvrière union has stayed independent, as it usually does.