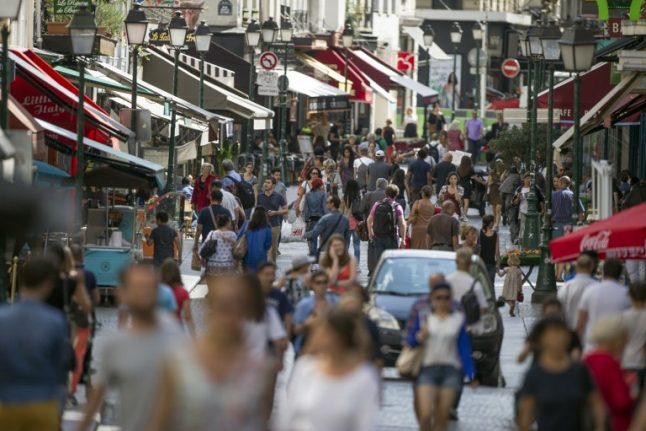 On the side of a building in Montorgueil, a trendy pedestrian area in central Paris, a line of graffiti reads: “It's dark in the country of the Enlightenment.”

It is a clear reference to the rise of Marine Le Pen, France's far-right presidential candidate who managed less than five percent of the Parisian vote in the first round of the election a fortnight ago. Out of the 20 arrondissements not one fell to Le Pen (see map below).

The fact that the anti-EU, anti-immigration Le Pen reached Sunday's run-off vote by scoring 21.3 percent nationwide has been met with a mixture of dismay, shame and disgust by many Parisians.

But now with the crucial second round vote just days away some Parisians are getting anxious about the prospect of her taking up residence at the Elysée Palace.

“There is a big enough chance that she could win and that’s giving me nightmares and anxiety. Being a psychologist and psychoanalyst, I can see that my patients are extremely overwhelmed with what’s going on.” But with the latest polls showing Macron has stretched his already commanding lead over Le Pen (Macron 62 percent, Le Pen 38 percent) most Parisians we spoke don't feel the need to panic.

“I don't think she can win, because most French people are against the extreme right,” said Alain a 48 year-old entrepreneur. “She is a fake and a sham.”

Sandrine Lanceleve, 43, told The Local: “She's like her father in 2002, she can reach the second round but she won't go any further.”

But others in Paris were still not counting their chickens, conscious of other recent election shocks.

“I don't think she'll win but it could be like the US where nobody believed [Trump would win]. That's why everyone must mobilise and stop her,” Cordele Samia, 46, who works in human resources told The Local.

Le Pen's outside chances of winning seem to hinge on huge abstention among disgruntled or complacent voters, but in Paris the turn out is expected to be high once again. It was 83.5 percent in the first round.

There were fears a large number of Parisians would not vote on Sunday and instead head off for the long weekend with Monday May 8th a public holiday, but City Hall says 100,000 voters have made the effort to register a proxy to vote for them (procuration) – a 25 percent in crease on the 2012 election.

The capital's inhabitants it seems are taking no chances. The presidential election has cast a harsh light on the divide between globalisation's winners and losers, but Paris is largely in the winners' column as a city top-heavy with white-collar workers.

The demographics of the city of 2.2 million make it a much better match for Macron, a pro-European, economic liberal.

The former investment banker appeals to urban youth, the middle class and business leaders, while Le Pen's populist opposition to the “system” and the urban elite as well as her nationalist positions, attracts working-class people, especially in rural areas with high unemployment.

The chasm between the two France's can be seen in the comments of some Parisians.

“I'm ashamed of my country,” Alexandra Marchand, 25, a restaurant manager, told AFP,  when asked about the rise of Le Pen's National Front (FN).

She called the far right party “the party of morons who vote without understanding. It appeals to people in the sticks.” The remark matches the reputation of Parisians for snootiness towards the rest of the country, captured in their description of anywhere outside the capital as just “the provinces”.

Many in the capital however have been asking themselves the question what would they do if a far right party, whose roots and core support are in the “provinces”, actually came to power?

“If she does something really serious, I would just go home,” Hamid Kran, 40 an unemployed Moroccan national told The Local.

Etienne Melot, a 25-year-old optician said: “If she wins I will take to the streets and revolt, but I will wait to see what happens over five years to decide whether to leave the country or not.”

A 23-year-old student named Pau Valery said: “There would be tonnes of grief. I don't think I could stay in a country like that.”

Others however said they would just continue life as normal.

“If she wins I will stay in Paris, because this is where I live,” Elena Manset a 24-year-old student said. “I am French and white so it's not me who would have the problems. That's the horrible thing.”

Among Le Pen's promises for France it is her plan to leave the euro and the EU that worry many Parisians.

“It would be a disaster for the economy. We need to improve the EU not leave,” said Dahmane Nacer, a 61-year-old hair dresser.

For others in the multicultural city of Paris it was Le Pen's xenophobic ideas that caused the most unease.

“She will cut off healthcare for foreigners and get rid of rights,” said Loris Gardia 29-year-old psychiatrist. Others talked of her plan to restrict religious practices such as the wearing of the Muslim headscarf and Jewish Kippa in public places.

While the latest polls suggest Parisians have little reason to panic given the lead Macron enjoys, the capital city will probably only relax if he is confirmed as president on Sunday night.

The “provinces” however and in particular those regions to the south and north and all the little towns that wanted a Le Pen victory are unlikely to rest easy after Sunday's result. by Blyth Brentnall and reporting from AFP