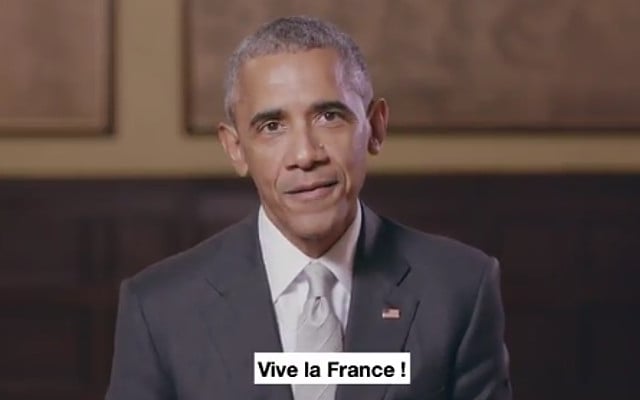 Photo: Emmanuel Macron/Twitter
The video was posted online via Emmanuel Macron's Twitter account on Thursday afternoon with the caption: “Hope is on the move”.
Subtitled in French, the 70-second video shows Obama looking into the camera and pledging his support to Macron.

“I've always been grateful for the friendship of the French people, and for the work that we did together when I was president of the United States,” he said.
He adds that he has no intentions of getting involved in many elections, but that the French one is “very important to the future of France and the values that we care so much about”, adding that “the success of France matters to the entire world”.
“I have admired the campaign that Emmanuel Macron has run. He has stood up for liberal values, he put forward a vision for the important role that France plays in Europe and around the world and he is committed to a better future for the French people,” he said.
“He appeals to people's hopes and not their fears,” he added, in an apparent reference to Macron's rival Marine Le Pen.
“And I enjoyed speaking to him recently to hear about his independent movement and his vision for the future of France. I know that you face many challenges, and I want all of my friends in France to know how much I am rooting for your success. Because of how important this election is, I also want you to know that I am supporting Emmanuel Macron to lead you forward. En Marche, Vive La France.”
Obama's endorsement comes on the heels of a phone call he made to Macron late last month, in which the former president wished Macron luck in the campaign and shared some advice to “work hard all the way through. Because, you never know — it might be that last day of campaigning that makes all the difference.”

Let’s keep defending our progressive values. Thank you for this discussion @BarackObama. pic.twitter.com/8rhNdHkLo8