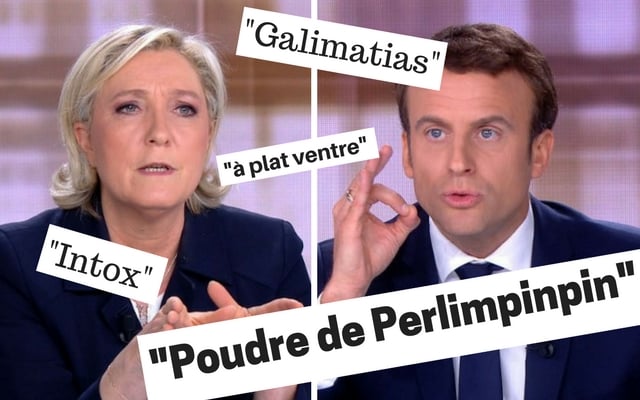 Emmanuel Macron and Marine Le Pen engaged in a two-and-a-half hour verbal assault on each other on Wednesday night and they provided us, either directly or through the media coverage, with some great new French words to memorize and use.

When Macron pressed Le Pen on one of her responses, he said: “Are you talking about Trump and Putin? This is truly 'galimatias'.” Even the French were confused about this one, but it means “rigmarole” or “claptrap”.

If you just watched five minutes of the debate, you’d have heard Macron accusing Le Pen of “bêtise”, a noun meaning stupidity, nonsense, or folly.

Perhaps the most eloquent insult of the night was when Macron called Le Pen: “The high priestess of fear”.

Macron used the uncommon word “broutard” while talking about farming across France… a word that means the equally uncommon “weanling” in English (or an animal that no longer drinks its mother's milk).

While Macron was discussing his counter-terrorism plans, he told Le Pen that his project was serious, and not a “sauts de cabri”. In other words, his project was not like “a kid goat leaping around”, implying that Le Pen's plans were ill thought through and just spur of the moment, silly ideas. Some pointed out that Charles de Gaulle made similar comments in 1965. Le Pen called Macron the “candidat à plat ventre” which basically means “prostrate” or “flat on one’s stomach”. She was essentially accusing him of lying down before Germany and before the banks, or perhaps being “under their thumb”.

Le Monde newspaper picked apart the 19 “intox” presented by Marine Le Pen during the debate. Intox could be translated as “misinformation” or even “fake facts”.

This word used by Alain Juppé to describe Marine Le Pen’s performance had us looking in the dictionary. Here, the best translation would be “muddle-headed”, but it also means “rough draft”.

The French media used plenty of analogies to describe the aggressive manner of the debate, notably a “passe d’armes” which means heated exchange or in the literal military sense a “passing of arms”.

Another word used by the media to convey the violent exchanges was “pugilat” which basically means brawling.

Some analysts described Marine Le Pen’s performance as a “naufrage”, which we would probably translate to a train wreck although it really means shipwreck.

Another accusation levelled at Le Pen was that she brought the level of the debate down or perhaps debased it. In French it's “tirer vers la bas” – literally meaning to “pull it towards the bottom”.

READ ALSO: Are these the 23 'best' words in the French language?