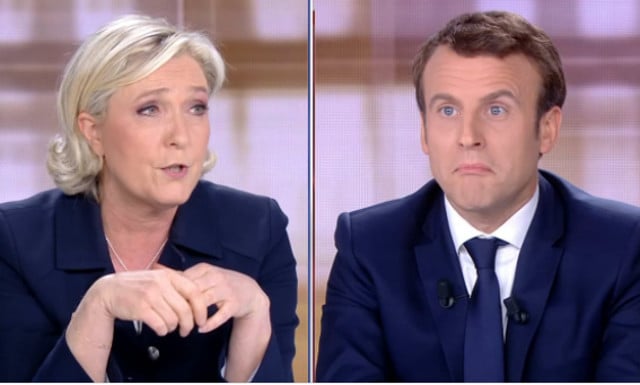 In bruising opening exchanges, Macron accused Le Pen of telling lies, while she branded the 39-year-old former investment banker “the candidate of the elite” who would sell off French companies to the highest foreign bidder.

“Your strategy is to tell lots of lies, you don't propose anything,” Macron told Le Pen, while she replied that the former economy minister represented “uncontrolled globalisation”.

Le Pen attacked her rival in the opening minutes of the only face-to-face debate before Sunday's runoff vote, saying he was “the darling of the system”.

Macron retorted that Le Pen, the 48-year-old scion of the National Front (FN) party, was “the heir of a system which has prospered from the fury of the French people for decades”, adding: “You play with fear.”

'Everything cannot be bought'

Macron rebutted many of Le Pen's attacks in the opening hour, saying her proposals would have to be financed by borrowing or by raising taxes — what he called “a hidden programme”.

Le Pen hit back that while she would protect state assets and increase people's spending power, Macron would sell off French state companies to foreign buyers.

The debate marks a new step into the mainstream for Le Pen, whose party was once considered by France's political establishment to be an extremist fringe that should be boycotted.

When Jean-Marie Le Pen made it into the final round of the presidential election in 2002, his conservative opponent Jacques Chirac refused to debate with him out of fear of “normalising hate and intolerance”.

Fifteen years later, Le Pen scored 21.3 percent in the first round of the French election on April 23 after softening the National Front's image — but without fully removing doubt about the party's core beliefs.

The debate was her biggest chance in front of a live television audience of millions to impress undecided voters. Socialist President Francois Hollande and members of the government have led warnings about the risk of a Le Pen presidency, with around a third of voters set to abstain, according to pollsters' predictions.

“We are in a zone of absolute danger,” warned Education Minister Najat Vallaud-Belkacem before the debate. “Do not play Russian roulette with our democracy.”

Hollande told reporters that “we shouldn't think the result is a foregone conclusion” and urged Macron, his former advisor and economy minister, to make clear his different vision of France in Europe and the world.

Macron quit the government last August to concentrate on his new centrist political movement En Marche, which has drawn 250,000 members in 12 months.

He is expected to home in on uncertainty about Le Pen's pledge to withdraw France from the euro common currency.

The policy is seen as risky and is unpopular with most voters. “Macron would do well to put maximum emphasis on the EU issue in the debate, especially the currency,” veteran political analyst Philippe Braud told AFP. “It's the issue that causes the most concern, especially for businesses.”

Le Pen said Sunday that a new franc would be introduced for daily use while the euro would be retained for “large companies that trade internationally”.

“The franc to buy your baguette and the euro for multinationals… it's not so much backtracking but a smokescreen in the last days of the campaign,” wrote journalist Jacques-Olivier Martin in newspaper Le Figaro on Wednesday.