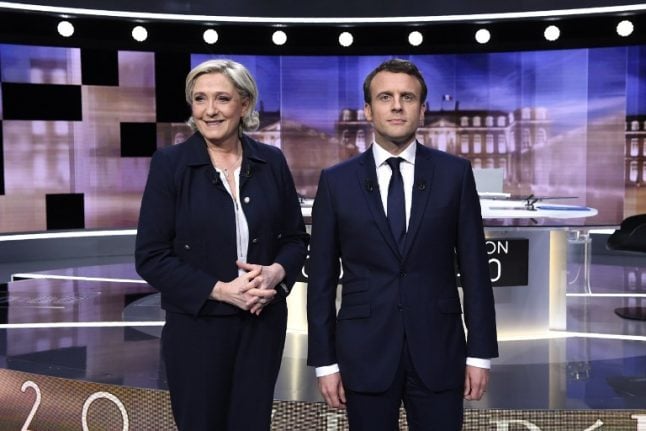 Photo: AFP
Here are some of the best quotes:
“The high priestess of fear is sitting before me” – Macron accusing Le Pen of “prospering from the fear of the French people”.
“Whatever happens, France will be led by a woman, either me or Mrs Merkel” – Le Pen alleges that Macron would allow Germany to crush France's economy.
“A big company cannot pay in euros on one hand and pay its employees in francs on the other… this is the big nonsense of Marine Le Pen's programme” – Macron attacks Le Pen's plans to partially scrap the euro.
READ ALSO: Le Pen and Macron trade insult after insult in fiery final French election debate “The France you are defending is a trading room, where it will be everyone fighting for themselves” – Le Pen's view of Macron's economic vision.

“Your strategy is to tell lots of lies, you don't propose anything” – Macron to Le Pen.
“Security and terrorism are major issues that are completely missing from your programme” – Le Pen accuses Macron of failing to grasp the threat facing France.
“The threat that (Islamic extremists) pose is the one you are proposing, it's a civil war” – Macron says Le Pen wants to divide France.
READ ALSO: Belligerent Marine Le Pen fails to convince in 'undignified' live debate