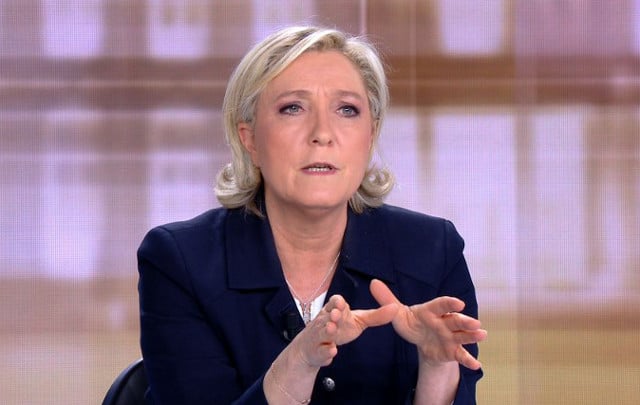 The live TV debate between Emmanuel Macron and Marine Le Pen was two a half hour slanging match in which insults and invective were traded from the word go.

In the run up to the debate many thought Le Pen would tone down her aggressive style in order to appear more presidential.

But she came straight out of her corner of the ring swinging at her rival.

She was the first to speak and launched straight into an attack on Macron calling him “the candidate of wild globalization, uberization, poverty… the candidate of a war of everyone versus everyone…”

She referred to him as the “cold banker” and the “darling of the system”.

Le Pen had set the tone for how she would go on, but it wasn't the right one.

Her tactic was to unnerve and rattle Macron and get under his skin. Rather than persuade electors to vote for her and her vision she aimed to dissuade those reluctant Macron voters from backing him on Sunday -perhaps hoping to boost the abstention rate, knowing that's her only hope of victory. She spent a great deal of time attacking Macron for the record of François Hollande's government, of which he was the former economy minister.

Macron too was combative, repeatedly telling Le Pen she was telling lies or “saying stupid things”.

But it was Le Pen's “permanent aggression”, which at one point verged on defamation when she suggested Macron might be hiding money in offshore bank accounts (he later announced he had officially filed a complaint) , that was heavily criticized by political analysts and appeared to infuriate viewers.

Alain Juppé, the former Prime Minister and former presidential runner said: “How bad was she! Messy, aggressive, sarcastic. How can imagine such a person as President of France,” said the Mayor of Bordeaux.

Even her father Jean-Marie said she wasn't good enough.

“Invective is all she’s got,” said Paul Smith, professor of Francophone studies at the University of Nottingham who was following the debate for The Local.

“You cannot debate with her because her tactic is to simply slag off, that's the technical term. She set the tone and while Macron might have stood back, he had to show he wouldn't be bullied by her. It was a fight and she didn't win.”

“I can't help thinking that Macron's concluding point wad spot on. You had two minutes to say why the French should vote for you and all you did was slag me off. Is that all you've got?”

TV viewers were less than convinced by Le Pen’s performance with a poll carried out by Elabe and published by BFMTV showing that 63 percent found Macron the most convincing candidate in the debate and 64 percent of viewers found his programme the most suitable for France. However it's unsure if Macron will emerge with any real credit given that many in France thought the debate as a whole was “undignified”, even if it made for great viewing.

The media on the whole were critical of Le Pen, with Le Monde accusing her of presenting fake facts and information 19 times.

Right leaning Le Point magazine described her performance as a “shipwreck” and accused her of being “incompetent”.

Ruth Elkrief, political editor with BFM TV said the event was “not worthy of a presidential election campaign”.

She criticized Marine Le Pen for her excessive aggressiveness and for speaking as though she was at a political rally rather than a presidential debate.

“It’s like she had already accepted her defeat,” said Elkrief. “She did not put herself in the clothes of a future president,” adding that she was surprised given how professional Marine Le Pen had campaigned until now.

Another BFM TV political analyst Thierry Arnaud criticised her “permanent aggressiveness” saying it was a “surprising attitude given all that was at stake.”

Le Pen strategy tonight was not to be presidential or target voters outside base. She was on the attack, trying to drag opponent into mud.

Amid all the aggression and insults of which Macron was hardly a bystander (he called Le Pen a parasite at one point) all talk of their projects to rejuvenate France was lost amid the racket, which the two moderators found hard to restrain.

She was widely mocked on Twitter for an exchange (see the viral meme below) in which she accused Macron of insulting millions of French people, whilst waving her arms around.

By the end many accused Marine Le Pen of cracking or losing her nerves.

Le Pen shouting at Macron looks in total meltdown now. Thankfully only 4 minutes of this left. 2 mn each.

French journalist Jean Quatremer, who works for left wing newspaper Liberation tweeted: “This is a big moment in television, the emotional collapse of Marine Le Pen live, which highlights her limits.

Leaving the studio at the end it was Le Pen who accused Macron of being aggressive and going in for personal attacks.

“I'm used to being badly treated and insulted,” she said, before saying she was off to have a glass of Champagne with her party members.

Given that analysts and pollsters have repeatedly stated they doubt the final debate would impact on Sunday's election result, especially given Macron's 20 point poll lead, Le Pen's aggressive and unconvincing performance probably won't have dented her score.

But with just two days of campaigning left it looks ever more likely it will be Emmanuel Macron drinking the Champagne on Sunday night.