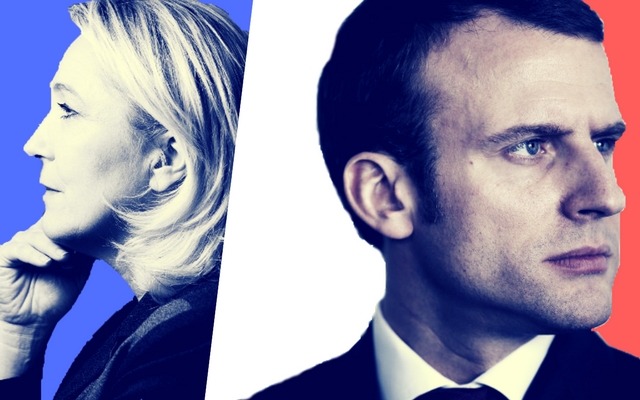 Photo: AFP and Rose Trigg
Firstly Marine Le Pen…
Le Pen's metaphorical, and sometimes literal description of France can be colourful at times, and sensationalist and divisive at others.
Her view of France paints it as under threat and overwhelmed and she refers to France's past historical figures both as examples of what the country is and isn't.
According to Le Pen “France is…
“A university for jihadists”
In the big presidential debate between the then 11 candidates late March, Le Pen repeated the line twice that “France is a university for jihadists”, referring to terror in the name of jihadism and suggesting France provides the perfect schooling for violent extremists.
“Not burkinis on beaches but Brigitte Bardot”
Talking to CBS news in New York on the subject of the Islamic veil, Le Pen said “France is not a burkini on a beach. France is Brigitte Bardot.”
The famous French actress turned animal rights campaigner Bardot became both a sex symbol and figure of female liberation in France, so Le Pen's description contrasts with the perceived oppressiveness of the swimwear version of the burka, or “burkini”.
However, Bardot also been fined five times for inciting racial hatred, once referring to Muslims as “this population which leads us by the nose and destroys us and our country”.
So it's not too clear which side of Brigitte Bardot “is France” according to Le Pen, sexual liberation, Islamophobia, or both? Photo: AFP
“Full up”
According to Marine Le Pen, France is packed to bursting. In a BBC interview widely condemned by British audiences, Le Pen says, on the subject of immigration “We are not going to welcome any more people. Stop, we are full up.”
“A hotbed of terror suspects”
At a rally in Marseille in April Le Pen ramped up the fear factor, saying France was a “hotbed of S-files” referring to the 10,000 or so individuals classed as Fiche S, meaning they have been signaled as a potential threat to security, due to having been radicalized.
“Not the Vichy regime”
France's role in the deportation of Jews to Nazi Germany has always been a highly sensitive issue in the country.
Le Pen sparked a row in April, saying that France was not responsible for the roundup of French jews at the Vel d’Hiv cycling track in Paris to be sent to Nazi death camps.
She pointed the finger instead at the wartime government in Vichy, central France, something which is “not France” according to her.
“I think that, generally speaking, if there are people responsible, it’s those who were in power at the time. It’s not France.” Marshal Philippe Petain, head of the Vichy government. Photo: AFP
“An extraordinary singular voice”
Speaking in Villepinte, a town north east of Paris, on May 1st, Le Pen said “France, it's also a group of values and principles passed down from generation to generation, like passwords. And then it's a voice, an extraordinary, singular voice which speaks to all the people of the world.”
François Fillon should also be credited with this definition, as many noted Le Pen's speech bore more than a little resemblance to the defeated Republican candidate's own words.
“Land and sea, trees and birds”
In a 2016 conference, speaking on the subject of “sustainable France” Le Pen helpfully reminded audiences of France's physical existence. “France is not an idea, but a living reality of people and places, land and sea, trees and birds.”
Many noted that words actually echoed her father Jean-Marie's words in a tweet from September 2016: “France is not just an idea, it's a carnal reality…a soul.” And what about Emmanuel Macron?
The En Marche! candidate, who once said there is “not one French culture” has been characterized by Le Pen's supporters as representing a faceless globalized France with no identity.
“The country Mr Macron wants is no longer France, it's a space, a wasteland, a trading room,” Le Pen told supporters recently.
His descriptions of France show a markedly more positive and inclusive tone, something Macron likely placed a deliberate emphasis on to differentiate himself from his rival.
According to Macron “France is…
“Not hatred and rejection of others and not what Le Pen says it is”
Out on the campaign trail in Sarcelles, a town in the northern suburbs of Paris in late April, Macron played football with some local youths and gave not one but three definitions of France.
“France is not hatred and rejection of others,” said Macron. “France is not the hateful and repressive face that Ms Le Pen wears.”
Macron described the town as being “an incredible lesson about what France is. France, it's not what Madame Le Pen says it is.”
“A will”
In a meeting in Paris on May 1st, Macron told the audience “France is not a fixed, closed identity, based on a fantasized past. France is not an idea either, which we think of in an abstract manner. France is a will, it's our will and it is only that which holds firm.”
“A country where a person who fights for their life and for their values should have a resident's permit”
Speaking on the French Elysée 2017 TV programme, Macron spoke about asylum claims, saying it was inhumane and inefficient that so many Syrian and Afghan people take risks to arrive in Europe without knowing if they'll be allowed to stay.
He added “France is a country where a person who fights for their life and for their values should have a resident's permit.”
“Universal”
The supposed universality of “Frenchness” is a theme that pops up often in both candidate's descriptions of France.
In an interview with La Depeche regional newspaper published May 3rd, Macron made a bid to show his patriotic credentials, saying “I love France in all the richness of its identity, in its universality.”
“A proud people”
In Arras in northern France Macron gave another rather literary description of his country, saying “France is a proud people, who are constructed by their language, but who have always aspired towards the universal.”
“France is a language that is spoken on all continents, and which exported its ideals to all democracies.”
By Rose Trigg