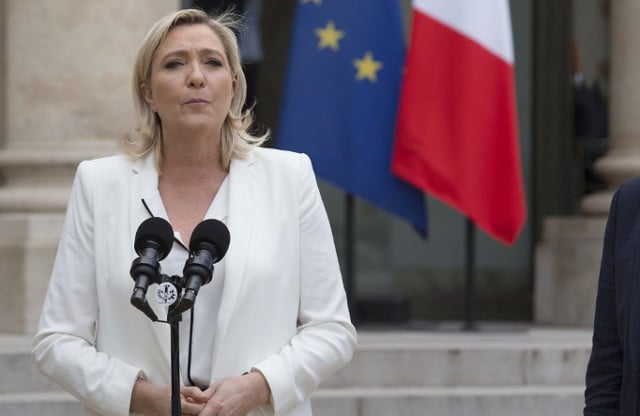 Marine Le Pen makes a statement on the steps of the Elysée Palace. Photo: AFP

The main focus of Marine Le Pen's politics over the first six weeks of the presidency will be to put together an alliance capable of winning a majority in June’s general elections to the National Assembly, France’s lower house.

Le Pen has already formally announced that she would name her prime minister as Nicolas Dupont-Aignan (see pic below), leader of Debout la France (Rise Up France) a tiny, conservative party focussed on euroscepticism.

But judging by the reaction to Dupont-Aignan’s rallying to Le Pen, even within his own party, putting a coalition together might be beyond them. Leaders of the main right-wing party, Les Républicains, have mostly called for a vote for Macron. Most, but not all.

And if Le Pen wins the presidency but Les Républicains are the largest group in the new National Assembly, they might negotiate a deal with one of them as PM, with a view to reining in Le Pen.

But, it must be stressed that the legitimacy of her election would make outright opposition very difficult, in the early months at least.

Le Pen's team has also talked of her dissolving the National Assembly in the case the result of the general election is not favourable.

The French civil service is generally reasonably neutral but it may be, however, that a number of senior civil servants decide they cannot work with Le Pen and prefer to resign. (Some ambassadors have already made this clear.)

But while Le Pen may not have the wide networks of the more established political figures, she has some contacts and has certainly been talking to senior fonctionnaires (civil servants) behind the scenes. Le Pen has also cultivated networks within the corps diplomatique. And with state posts, there is always someone available to fill a position.

In reality there is very little the new head of state can do until the parliamentary electoral process is completed, but if Le Pen is elected, we can certainly expect a series of police interventions and expulsions of foreign delinquents to show that she means business on law and order.

READ ALSO: 'French first': This is what a 'President Marine Le Pen' has in mind for France

And if they achieve a majority?

If we assume Dupont-Aignan is somehow able to secure a majorité bleu-marine in parliament, the government will focus its energies on delivering the short-term promises of Le Pen’s manifesto, such as cutting gas and electricity tariffs by 5%, removing lower-bracket taxpayers from the income tax system and raising family allowances with a view to boosting the birth-rate amongst French families. (None of these proposals are costed in her manifesto.)

She may also expect MPs to get going on a bill to abolish the right to French nationality on the basis of place of birth. Since 1889, anyone born on French territory can claim nationality through droit du sol. Le Pen is determined to change this to a blood right.

If the French haven’t had enough of ballots by then, there will also probably be a referendum before the end of July on a raft of constitutional changes, including enshrining the principle of national priority in the declaration of rights, a reduction of the number of members of parliament, the introduction of PR for general elections, the abolition of France’s regions, greater scope for the use of the referendum by the head of state and the creating of referendums by popular initiative.

If the turnout for that is low, that will suit her perfectly.  The lower the turnout, the better the chance of success.

Not much has been made of these changes, but they would significantly shift the balance of the institutions of the Fifth Republic away from what political scientists call a semi-presidential regime, where executive power is tempered by parliamentary oversight and intervention, towards a plebiscitary, authoritarian presidency, where referendums are used to perpetuate an imitation of popular democracy and to over-ride parliament.

What won’t happen this year, however, is either a Frexit or a French departure from the eurozone, which may come as something of a surprise given that these were key aspects of her policy of “intelligent protectionism”.

The official reason, given by a number of spokesmen and women for Le Pen, including her niece Marion Maréchal Le Pen, is that it would be better to await the outcome of German and Italian elections later this year before considering the shift from the monnaie unique (the euro) to what Le Pen and Dupont-Aignan term la monnaie commune – a new version of the franc.

Le Pen is not looking, then, for a euro-referendum before 2018 and might even wait until the European elections of 2019 to test French eurosceptic waters.

We can expect, however, a great deal of Frexit rhetoric over the next few months, as Le Pen picks on an easy target, and talk of renegotiating the EU treaties.

In the meantime, Le Pen will focus on screwing net immigration into France down from its current annual level of around 260,000 to just 10,000 souls per year.

One means of doing this will be to halt migration at its source, with applications being made via French consulates, not on arrival in France, and with the creation of more camps in countries where cross-border migration flows are a major problem. Libya could, for example, become the location of holding camps, possibly manned by some of the 50,000 extra members of the armed forces Le Pen says she will recruit between now and the end of her first term in 2022.

At the same time, Le Pen has promised to extend the ban on wearing certain forms of clothing that expresses religious belief (not just the burka but also the simple headscarf) from all public spaces, on the grounds of protecting the values of the secular state. It’s not clear how this will affect Jews wearing the kippah, Sikhs wearing turbans, or indeed, nuns. And it goes without saying, of course, that if Le Pen is elected on Sunday, France will probably witness public unrest on a massive scale between the presidential and general elections.

Though the opposition to Le Pen, whether it is political parties and movements, or the trades unions, will try to keep a lid on demonstrations, the violence in Paris on May 1st, attributed to Black Bloc activists, may only be a small foretaste of things to come. That, of course, will play right into Le Pen’s law and order narrative. READ ALSO: 'French first': This is what a 'President Marine Le Pen' has in mind for France