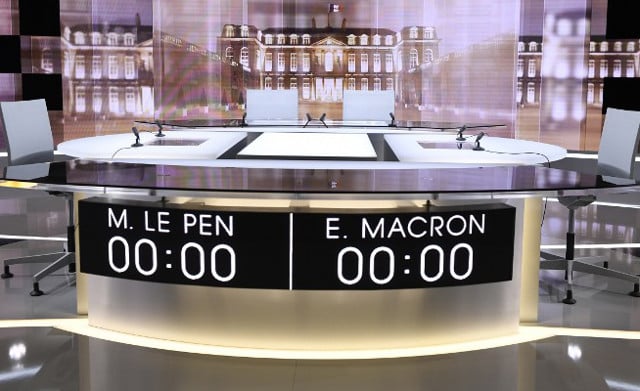 All photos: AFP
Wednesday night in France will see Macron and Le Pen meet face to face for a crunch TV debate, just four days before the second round of the election.
Even with Macron polling at 59 percent, compared to Le Pen on 41 percent, the huge media focus on the debate and what's at stake for both candidates gives the impression that Sunday's vote is riding on who can land the bigger blows during the live head-to-head.
But Edouard Lecerf from polling agency Kantar Public told The Local that no matter what happens on Wednesday night, it's unlikely we will see a dramatic shift when we wake up on Thursday morning.
“Second round debates don't typically change the course of history,” he told The Local on Wednesday.
“If there was just a one point difference in the polls I would say something different, but this is a huge gap, and I can't think of anything that would destabilize the current trends,” Lecerf said.
“But that doesn't mean we shouldn't take it seriously,” he said. “It's a very important moment, one that we only have every five years.” He said he could see the 19-point gap between the candidates potentially shrinking, but only slightly.
Polls back up his argument with 75 percent of French voters saying the debate won't change their voting plans.
However with over one in four French voters expected to abstain, there is a chance the debate could motivate some of them to vote.
“You shouldn't analyze polls after the debate anyway. Things might change, maybe the debate might push people to the polling stations, but in terms of an actual shift, it would only be marginal,” Lecerf said.
The reality is Marine Le Pen gained 7.67 million voters in the first round of  the election and she probably needs to somehow double that in the second round,” Lecerf says.
Mass abstention could threaten Macron's chances of victory, but it's still unlikely, he said.
The pollster added that people tend to put more importance on France's TV debates than they should, particularly when suggesting that past French presidential campaigns have been won by smart debates or witty punchlines.
For example, many point to Valéry Giscard d'Estaing's comment to his rival François Mitterand “You can't have a monopoly on heart” as pivotal to his 1974 election win, but Lecerf disagrees.
“These kind of punchlines only become famous afterwards because they get repeated so often. The “monopoly” comment just brought something to a sentiment that already existed.”
As for Wednesday night's debate, it's Macron's to win and it's likely that he will be extremely ready for Le Pen, Lecerf said.
“In my opinion, he will be very well prepared and he will carefully avoid anything that could make him blow it. It's more about where Le Pen will try and lead him,” he said.
He noted that Le Pen has deviated from pushing Macron as the pro-Europe candidate, preferring in recent days to label him as a finance candidate.
“She is going to push him harder on that, it's a way to grab voters who were thinking the same in the first round. She will hope that even if they are opposed to her, they will feel repulsed by his ties to the financial world.
READ ALSO: The 'perfect battle': Le Pen v Macron and their very different visions for France “She, meanwhile, will soften her image and try to win voters on an emotional level, while making Macron look technocratic. I don't think she will try and fight with him.”
However other analysts expect Marine Le Pen to try to get underneath Macron's skin, to provoke him into an outburst that will make him lose any presidential aura he might have built up.
There were reports this week that Macron planned to walk off the set if “he becomes a punch bag for Marine Le Pen” (according to one journalist who'd spoken with an aide to Macron).
That claim was later dismissed by Macron's team.
Macron will likely stick with his strong suit – well prepared answers with figures and statistics – and will come back hard at Le Pen on French values, Lecerf said.
“He will keep coming back to values and make Le Pen look like someone with the wrong values for France. He will show how France would look if she was elected by saying: 'Do you want France to look bright and open on the day after the election, or do you want all the international press to be looking at us in a weird way'?”
But for historian and media specialist Christian Delporte, Le Pen has already won to a certain extent.
“The fact that Marine Le Pen will be on the set is already a victory for her, because it shows the National Front has become a normal party like the others,” Delporte told BFM TV.
SEE ALSO: Macron vs Le Pen – All you need to know about tonight's live TV election debate