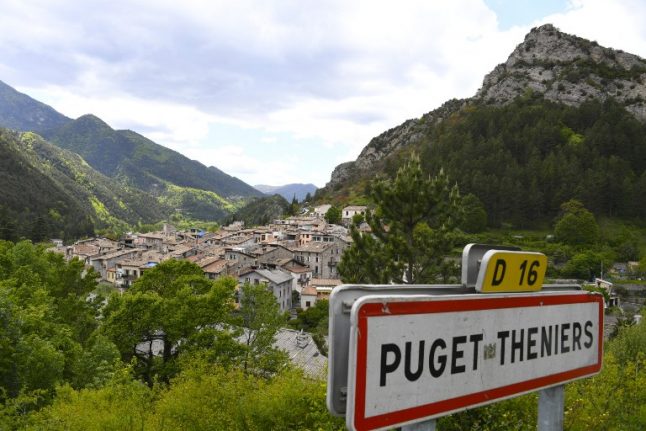 All photos: AFP
Halfway between mountains and the Mediterranean, the southern French village of Puget-Theniers is old, idyllic and a picture of the quiet rebellion under way in rural areas.
In the first round of France's presidential election, residents here, an hour's drive from the city of Nice, voted overwhelmingly to cast the country's rulers to the wolves.
Thirty-seven percent of 1,300 ballots on April 23 were for far-right leader Marine Le Pen and another 18 percent for Communist-backed firebrand Jean-Luc Melenchon.
A collection of other “anti-system” candidates from Trotskyists to a man who believes the European Union is a CIA-backed conspiracy won another 10 percent.
“We're fed up with our leaders favouring financial groups, insurance companies and bankers,” said Leo Vellutini, a 56-year-old having an afternoon drink with locals in the pretty square at the centre of the village.
He says the Le Pen vote has “spiced up our drinks together”. While not everyone agrees, no one at the table has anything good to say about France's political leaders.
“They've screwed us over for 40 years,” gripes one retired man in his 70s wearing a cap and clutching a glass.
They plan to vote for Le Pen in the runoff vote against pro-European centrist Emmanuel Macron on Sunday.
“The village is like all rural areas in France, it's doing badly,” said mayor Robert Velay (pictured below), standing in bright sunshine outside the town hall with the foothills of the Alps behind him. Farms and farming jobs disappeared years ago, while local shops have shut as people travel to supermarkets down the road towards Nice or order online.
The loss-making local abattoir is mired in red tape, he says.
“There are more people who own washing machines now, but do we live better?” he wonders aloud. “I think we need to look back at what worked well in the past.”
Nostalgia and sadness
This sense — of bitterness about the present and nostalgia for the past — is found across rural France and expressed in the support for so-called “anti-system” candidates.
Puget-Theniers illustrates this faultline between urban and rural areas that has emerged more strongly than ever in this year's election.
It also fits another major fracture between the east and the south of France where support for Le Pen is strongest, and the rest of the country. Few here see election frontrunner Macron as the solution with his calls for high-tech innovation, openness and fibre-optic connections for every village.
His campaign headquarters in Paris, full of 20-somethings in trainers rushing to meetings with their laptops, is a far cry from the sleepy cobbled streets of Puget-Theniers.
The nearby waters of the fast-flowing river Var provided the last economic boom for locals when they were used by the village's leather and shoe-making industry more than a century ago.
Little wonder then that Le Pen's championing of “the forgotten people” — those bypassed by the huge economic and technological change of recent times — finds fertile ground.
“Le Pen supporters want another sort of France, a France from the past,” Sylvie Poitte, a 70-year-old from the village who once ran local hair salons, told AFP.
But she admits too that life was better when she arrived with her three children in the 1980s.
“If I was arriving now, I wouldn't stay,” she said.
Economics and migration
Support for Le Pen and her National Front (FN) party, founded in 1972, has always been strong in the south of France due to a mix of factors.
Herve Le Bras, a leading French demographer, has popularised a socio-economic explanation of the vote here and in the FN's newer stronghold in the rustbelt of northeast France.
His colour-coded maps showing the hotspots of unemployment, low education achievement or poverty mirror the zones of highest FN support to a striking degree.
The only place the correlation fails is in large cities, where deprived areas do not vote for Le Pen, which he puts down to their “contact with the world.”
But there is also history and the impact of migration.
The FN has long defended the country's colonial past and so-called “pieds noirs” (“black feet”), the white migrants who settled in French-run Algeria. When Paris granted the north African country independence in 1962, hundreds of thousands were forced to cross the Mediterranean, with many choosing to settle in the south.
Waves of Arab migration followed them, initially as Algerians came to work in French factories during the labour shortages of the 1960s.
Far-right expert Jean-Yves Camus says this created a toxic combination — resentful pieds noirs living alongside the people they blame for their misfortune.
Other specialists, like veteran sociologist Jean Viard, say southern natives have also seen their identities challenged by new arrivals from northern France and an explosion in tourism.
But neither immigration, nor insecurity — the two themes of Le Pen's pitch to voters — appear to be problems for the residents of Puget-Theniers.
Many people leave their doors open, but mayor Velay recalls that several youngsters “went into town” and were beaten up by “maghrebins” — people of north African descent.
Martine Tescher, who runs an art gallery in the village, puts the FN vote down to fear, particularly after two years of Islamist-inspired attacks in France.
“When you switch on the radio or television, there's never anything positive. It keeps people in a sort of climate of permanent terror,” she says.
By the AFP's Adam Plowright