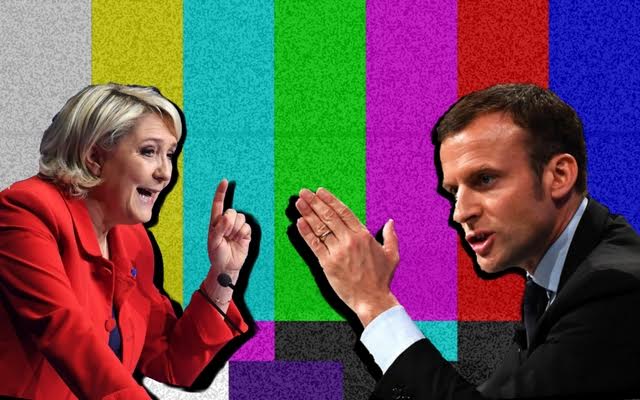 Who is it between?

We all know the face off is between Emmanuel Macron and Marine Le Pen, but it's also between two very different visions of France. In short it's pro-globalisation, pro-EU Macron vs a “France first” anti-EU Le Pen.

What times does it start?

The show will begin at 9pm so we can expect Macron and Le Pen to be going at each other toe to toe by 9.01pm.

How long will it last?

It is planned to last a full two hours and 20 minutes but organizers suggest it could go on for longer so don't expect to get an early night if you want to watch the debate until the end.

Where can I watch it?

It will be broadcast live on the French TV channels TF1 and France 2. However, the two channels will allow other broadcast outlets to share their coverage, so it will be on news channels like BFM TV. We will also be live blogging the debate as well as the reaction. Who will be the moderators?

The debates were originally going to be hosted by two male journalists but the French broadcasting regulator, the CSA, requested that the TV channels select one female and one male presenter. That means it will be the political editors of each of the two channels: Christophe Jakubyszyn from TF1 and Nathalie Saint-Cricq from France 2.

What form will the debate take?

It obviously won't just be a case of sitting Le Pen and Macron on opposites sides of a table (with a divide of 2.5 meters between them apparently) and letting them tear strips out of each other, although that would make for great viewing.

The moderators and their channel bosses have met with representatives of the two candidates to decide which subjects will be discussed. There should be around ten topics in total, so we can expect the areas where the candidates are diametrically opposed to be given plenty of airing. These will likely include Europe, the economy, identity and the case of the doomed Whirlpool factory in northern France that became a focal point of the campaign last week.

The two presenters have apparently come up with around 60 questions in total and have been diligently studying the manifestos of the two candidates.

Saint-Cricq said in the run-up to the debate that she wanted to avoid hysteria and make sure the subjects were discussed in depth so that they would be helpful to viewers.

READ ALSO: Who are the eight million French voters ready to back Emmanuel Macron? When did the presidential debates become tradition in France?

The second French presidential debates date back to 1974.

They have taken place every election apart from in 2002 when then president Jacques Chirac refused to debate with the National Front's Jean-Marie Le Pen after the latter's shock qualification to the second round.

What are the rules of the debate?

The main one is that the moderators will try to ensure both candidates speak for the same amount of time.

But there are also less obvious regulations that need to be followed.

This week both candidates made it clear they were against cameras cutting to show the reaction of one of them while the other speaks. These edits have been banned since 1981, but they were allowed in the debates before the first round of the election.

It is believed that negotiations are still ongoing so we may only know tonight if the viewers get to see the reactions of the candidates, which director Tristan Carné believes is vital component of their experience.

Other issues have been decided on by drawing lots. So Marine Le Pen will be the first to speak and Emmanuel Macron will have the last word.

Le Pen will be positioned on the left and Macron on the right, separated, as we said, by a 2.5 metre-long table.

READ ALSO: Who are the eight million French voters expected to back Marine Le Pen? Anything else we need to know about the organisation?

At one point the two candidates were set to debate from the Elysée Palace standing behind lecterns, but that was quickly ruled out. The pair will be seated, after Marine Le Pen apparently made it clear she was uncomfortable standing for so long in the two previous debates, partly to do with the fact she wore heels.

The temperature of the studio has been set at around 19C/20C to avoid the pair sweating profusely under the gaze of millions of viewers via the 14 cameras that will be installed.

The background set will be a blurred picture of the Elysée Palace as was the case in 2007 and 2012.

And there will be no audience, unlike the previous debates in this election campaign.

How are the candidates preparing their strategy?

Macron has warned he would not pull his punches in Wednesday night’s encounter.

Macron will likely bring up the several corruption scandals that Le Pen is embroiled in, notably the allegations she used EU money to pay aides in her own party.

For her part Le Pen apparently wants to wind up Macron, to provoke him, and to get under his skin, knowing he has a tendency to become riled quickly. We can expect Le Pen to interrupt him frequently right from the start in a bid to unnerve him.

READ ALSO: This is why millions of French people will vote Marine Le Pen What can we expect?

Macron to walk off the set if “he becomes a punch bag for Marine Le Pen”. At least that was what was suggested by a French journalist who claimed to have been told that by one of Macron's aides. That claim, which was later dismissed by Macron's team, prompted Marine Le Pen to fire out a mocking tweet saying she wouldn't mind if Macron brought President François Hollande along to hold his hand if he felt so ill at ease.

So the fireworks have already started. However Macron is apparently intent on a serious, dignified debate, without insults and invective. And the two presenters are too. But we can expect the candidates, given their visions of France to disagree on just about everything.

READ ALSO: This is why millions of French voters are backing Macron How many people are expected to watch?

The event is expected to attract a record number of viewers for a live political debate, perhaps as many as 27 million. Although some may be tempted away to watch French club Monaco in the semi finals of the Champions League against Juventus.

Who will come out on top?

It all depends how it goes and given that both have never been in this kind of arena before then we can safely say we just don't know who will cope better.

If it turns into a slanging match then expect Le Pen to come out on top given she has plenty in her arsenal to undermine her relatively novice rival. And most importantly she has nothing to lose.

In the first debate in the first round she landed perhaps fiercest blow when mocking Macron for “speaking for seven minutes without saying anything.” She had a point.

But if Macron can keep his cool and stick to the subjects and not be distracted by the person he is up against then he will hope to use all his experience and knowledge to teach Le Pen a lesson or two. Analysts say that given his healthy lead in the polls, Macron will be the winner if he just avoids losing the debate to his rival.

Opinion polls of viewers will be published within an hour of the debate and they will give us idea of who the viewers found the most convincing.

Will it affect the vote in the second round?

Edouard Lecerf from polling agency Kantar Public told The Local on Wednesday that the 19-point gap between the candidates suggested Macron's lead was too large to overcome.

“If there was just a one point difference I would say something different, but this is a huge gap, and I can't think of anything that would destabilize the current trends,” he said.

“Second round debates don't typically change the course of history.”