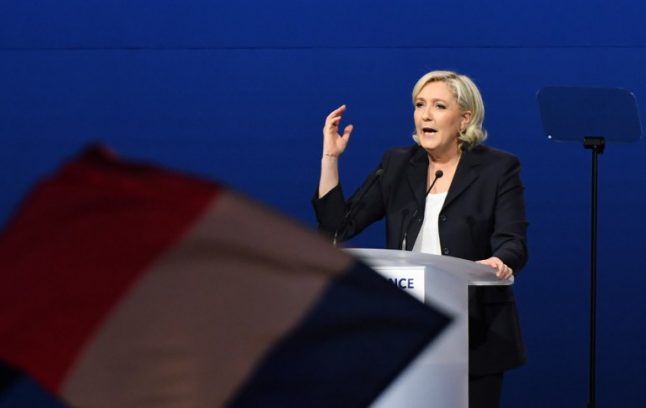 Photo: AFP
Marine Le Pen's has continued her attempts to win over voters from defeated conservative candidate François Fillon by copying part of a speech he gave to supporters on April 15th.
On April 15, Fillon made a speech in Puy-en-Velay in which he made specific mention of the geography of France's borders, paid tribute to the French language and spoke of a third “French way” for the 21st century.
At her rally Monday in Villepinte, Le Pen repeated almost verbatim these passages from Fillon's speech.

At his APril 15th rally Fillon had used the same phrase of France's “three maritime borders” with the English Channel, North Sea and the Atlantic.

The far right leader also quoted from World War I prime minister Georges Clemenceau and writer Andre Malraux, just like Fillon had done at his rally on April 15th.
“Once a soldier of God, and now a soldier of Liberty, France will always be the soldier of the ideal,” she said.
Asked by AFP about the apparent plagiarism, Florian Philippot, deputy chairman of Le Pen's National Front party, said it was “a nod to a short passage in a speech about France” on the part of “a candidate that shows she is not sectarian”.

The National Front's David Rachline, Le Pen's campaign manager also talked down the accusation of plagiarism, suggesting the speech was a form of tribute to Fillon.

The reference “was appreciated, including by all of Mr Fillon's supporters,” Rachline told France 2 television.

Fillon garnered 7.2 million votes in the first round of the election with polls suggesting anywhere between one quarter and one third of those will back Le Pen in the second round.