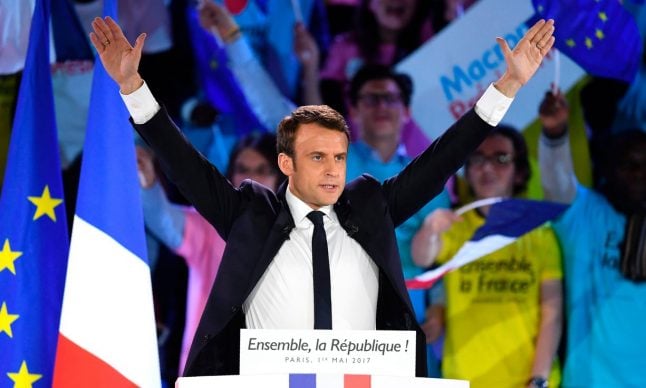 The threat the far right Marine Le Pen and her National Front party could take power in France prompted Emmanuel Macron into making one of his most sustained attacks yet on his rival at a packed rally in Paris on Monday.

Macron told 12,000 crammed into a hall at the Paris Event Centre in the north eastern edge of the city that Le Pen's National Front party was “anti-France” and that it was the party of “hate” and “violence” that sought to turn the French against each other and provoke “civil war”.

Macron sought to mobilise the so-called “republican front” – the traditional left and right against the far right – that has been fraying in recent days by positioning himself as the defender of France's democracy.

Voters will go to the polls on Sunday May 7th to vote on whether he or Le Pen should be the next president of France.

“May 7th is not just about defending a political project, it is about defending free democracy,” he told around 7,000 packed into the Paris Event Centre and thousands more in an adjoining hall, who watched on a big screen.

Crowds jeer name of Marine Le Pen everytime she is mentioned. Macron tells them “Dont whistle her, defeat her on Sunday” to raucous cheers. pic.twitter.com/CDa5dhe2jh

The 39-year-old leader of the En Marche movement told the crowd that a Le Pen victory would mean the exit of France “from Europe, from the world, from history.”

With the crowd jeering every mention of Le Pen's name Macron told them: “Don't whistle her, defeat her.”

“Make Le Pen lose on Sunday,” he told them.

He mocked Le Pen's seemingly ever changing plan to leave the euro and bring back the franc.

Under Marine Le Pen “we'd have the franc in the morning and then the euro in the afternoon,” said Macron. “That's before we've even started talking of Monopoly money.”

Huge cheers when Macron says: “I will never accept that French Muslims are insulted because they believe in Islam…” pic.twitter.com/OQPPmmrHlE

He laid out what a Le Pen victory would mean: “The end of the euro, “devaluation of the currency”, “abandonment of our alliances”, “impoverishment of employees”, “economic war and war”.

Macron warned Sunday's election was not just about France's future for the next five years but for “decades to come.”

Macron has made several symbolic stops on his campaign trail in recent weeks as if to warn voters of the dangers of nationalism and the extreme right.

He has visited a Holocaust memorial, a village where the French were massacred by the Nazis and on Monday he attended a ceremony to remember Brahim Bouarram, a young Moroccan man who drowned after he was thrown into the Seine by National Front supporters on 1 May 1995.

While he blasted Le Pen and her programme at every opportunity he said he would “never judge” those who vote for the National Front who were “angry and worried”.

“We need to build a republic for the winners and the losers,” he said.

Emmanuel Macron's final message to voters: “On May 7th be proud to be French. Be proud to be European.” pic.twitter.com/JhEzL4aojx

His supporters punctured his speech with chants of “Macron President”, “We are going to win” and after every mention of the National Front “We don't want them!”.

Many of those supporters who had filed into the hall to hear Macron speak talked of the danger of the National Front and how important it was for France that Le Pen is beaten on Sunday.

Laurent Segnis, 34, from Guadaloupe told The Local: “The rise of Le Pen is a shock for France, we now have a responsibility to show her that we don't agree with her vision of the country. Hers is not the France that we want.

“The danger of the National Front is that they will turn the French against themselves,” he added. “Emmanuel Macron represents the French Republic in all its diversity.”

Retiree Jean-Jacques Potiè, from the Val de Marne department, said: “I have three children and Emmanuel Macron is more positive and he brings hope, whereas Le Pen brings hatred and dishonesty. I don't want that for my children.

He, like many supporters were still worried that Le Pen could defy the odds and the polls (the latest poll sees her gaining 41 percent of the vote compared to Emmanuel Macron's 59 percent.)

Fear of a National Front victory has galvanised people here. “We cant have extremists in charge of France” one Macron voter tells us. pic.twitter.com/fiNOOZMCof

“I am not totally confident. The level of abstention will be important. There are people who are over confident,” he added.

Jean-Charles Molkou from the Paris region slammed those who are ready to abstain or post a blank vote because of their dislike of both Macron and Le Pen.

“Abstaining is just the same as a vote for the National Front. It's irresponsible,” he said.

But others spoke of the task Macron faces if he is elected.

“There is a real anger in France. Macron needs to respond to all the difficult complaints in the country but with a common objective,” said 32-year-old IT worker Zoser Bizyki, who lives near Paris.

Earlier in the day it was Le Pen who fired the first barbs at her rival at a meeting to the north of Paris.

Le Pen told thousands of her supporters at a rally Monday to reject “the world of finance, of arrogance, of money as king” that she said Macron embodied.

The first key speaker was Nicolas Dupont-Aignan, a eurosceptic from outside the FN who Le Pen has said will be her prime minister if she wins on Sunday.
She is hoping to capture some of the 1.7 million votes he won in the first round, although his support for Le Pen has divided his own party.
Le Pen has also fought hard to win over the voters from hard left Jean-Luc Mélenchon, who, like Le Pen, campaigned on an anti-globalization anti-free market platform promising to defend workers.
While Mélenchon has warned supporters not to give one vote to Le Pen, he has refused to back Macron.
Whatever happens on Sunday, history will be made in France.
The country will either have its youngest ever president or its first female head of state.