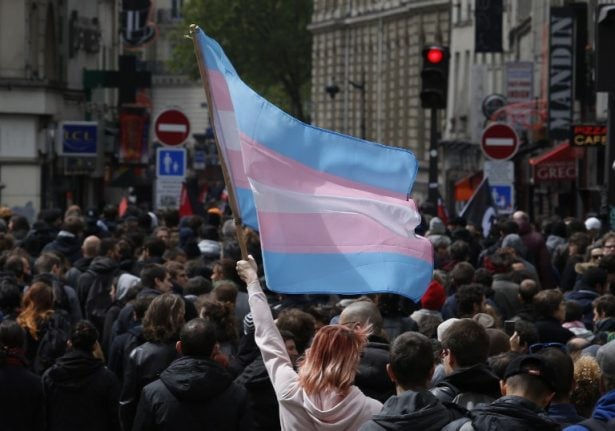 All photos: AFP
Le Pen has been travelling across France in recent days, making stops everywhere from factories to fishing boats, in bids to show her support for France's traditional working class.
Le Pen has tried to capitalize on the typical fears of workers, saying last week that her rival, the liberal pro-free market Emmanuel Macron would turn France into “a space, a wasteland, a trading room where there are only consumers and producers.”
She added on Monday that she wasn't sure what people were “marching towards” in Macron's party slogan “En Marche”, which can be translated to “We are marching”.

“Are we marching towards globalization? Unemployment? Instability? A deregulation of all professions?”

Le Pen has made efforts to woo some of the seven million voters who backed hard left, fellow anti-globalisation candidate Jean-Luc Melenchon in last Sunday's first round. But in the traditional trade union May Day rallies in Paris on Monday marchers showed that perhaps the charm offensive isn't entirely working.
“How can she represent workers? She is worse than Macron, who is of course a capitalist, but she is an ultra nationalist,” Philippe, a 56-year-old teacher told The Local.
Patrick Le Claire, of the Force Ouvriere trade union said: “Le Pen is a fascist. With Macron, at least you know you could demonstrate against him. But with fascists you always know it's going to be bad. The National Front is not democratic.”
Danielle, a 59-year-old librarian told The Local: “I have co-workers who are voting for her. I don't understand why they would. There are already too many people voting for her.”
Zora,40, who also marched through Paris on Monday told The Local: “Fascists such as Le Pen don't represent workers. Fascism is an ally of capitalism.”
Le Pen took her campaign to the working class Paris suburb of Villepinte on Sunday when she made a new push to attract supporters of Mélenchon, asking them to “block” Macron, saying his pro-business programme was “diametrically opposed” to leftist ideals.
Monday's marches in Paris did not attract anywhere near the kind of turn out France witnessed on May 1st 2002 when some 1.3 million people took to the streets of France to protest against the founder of the National Front (FN), Jean-Marie Le Pen, who like his daughter had qualified for the second round presidential election runoff vote. That show of force, coupled with a political closing of ranks, helped centre-right Jacques Chirac inflict a crushing defeat on Le Pen senior.
This time, unions are divided over the choice between his 48-year-old daughter and 39-year-old Macron.
Two, the CFDT and Unsa, have called for their members to back Macron on Sunday.
But while three other more left-wing unions including the biggest, the CGT, have called for a demonstration against Marine Le Pen's vision of French identity and opposition to immigration, they have stopped short of backing Macron.
For many on the left, the former banker's outlook is too economically liberal.
CGT leader Philippe Martinez said: “The National Front is a racist, xenophobic party that is anti-women and anti-workers because it is also an economically liberal party,” he said.
Le Pen hit back that the unions “are not defending workers' interests, they are looking after their own interests”.
“To see the CGT call on its members to vote for Macron, who is going to weaken the workers' lot… is just astonishing,” she said.
Many who The Local spoke to at Monday's march said they would vote for Macron through gritted teeth in order to block Le Pen, because they saw him as the lesser of two evils.
“Voting for Macron means voting for democracy, and I really mean it,” Arthur Hoaim, a 36-year-old legal adviser at Sunday's march, told The Local.
“It means I am voting not for someone I support, but someone who supports the institutions, which isn't true in Le Pen's case.”
Patrick, 50, a CGT union member said: “Le Pen does not represent us, neither does Macron, but we'll vote for him.”
Others however said they would abstain.

Le Pen's best hope for a win is a huge abstention across the board.  While abstention could reach a record level it is unlikely to be enough for Le Pen to become president.
Macron is currently favourite to become France's youngest ever president, leading Le Pen by 19 points in the polls.