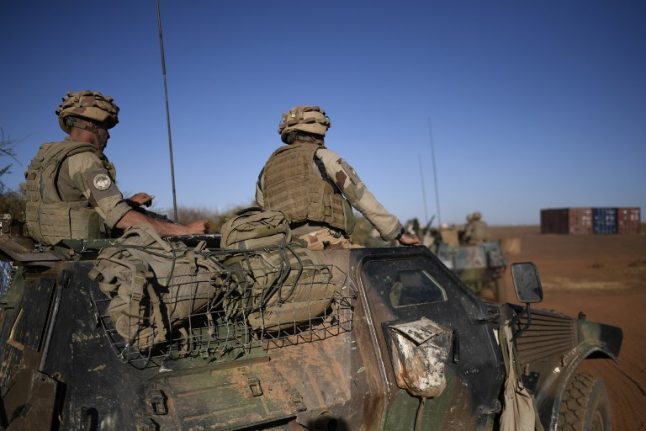 File photo of French soldiers involved in the regional anti-insurgent Operation Barkhane in Gao, northern Mali. Photo: STEPHANE DE SAKUTIN / AFP
Troops from Operation Barkhane, a French counterterror operation whose mission is to target jihadist groups operating in the Sahel region south of the Sahara Desert, launched the operation on Saturday south-west of the city of Gao.
“Since Saturday, the Barkhane force has been engaged in an operation which led to the neutralisation of nearly 20 jihadists in the forest of Foulsare near the border between Mali and Burkina Faso,” a statement said.
They were either killed or captured, spokesman Colonel Patrik Steiger told AFP without giving a breakdown.
French Mirage fighter jets bombed several arms depots in the forest, a sanctuary for armed terrorist groups.
Set up in 2014, the operation comprises around 4,000 soldiers who are deployed across five countries — Mauritania, Mali, Niger, Chad and Burkina Faso. In Niger, it operates four Mirage 2000 fighter jets and five Reaper drones for gathering intelligence.
Mali's north fell under the control of jihadist groups linked to Al-Qaeda in 2012 who hijacked an ethnic Tuareg-led rebel uprising, though the Islamists were largely ousted by a French-led military operation in January 2013.
But jihadists continue to roam the country's north and centre, mounting attacks on civilians and the army, as well as French and UN forces still stationed there.