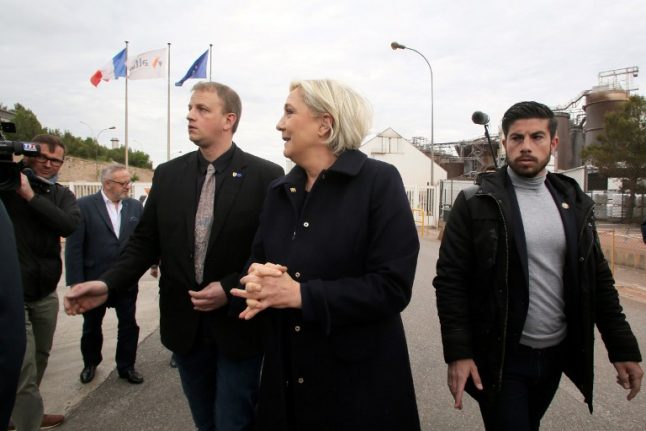 Marine Le Pen spent part of her Sunday campaigning at an aluminum plant that dumped toxic waste into the Mediterranean for decades. Photo: STR/AFP
After a surprise visit to a controversial aluminium plant in the southern town of Gardanne, the 48-year-old Le Pen went on to lay a wreath at a World War 2 monument in the nearby port of Marseille.
Hours later, Macron, who if elected would become France's youngest president at 39, paid his respects at Paris's Holocaust memorial, where he was greeted by France's grand rabbi, Haim Korsia.
Eurosceptic leftist Jean-Luc Melenchon, who crashed out of the race in the first round, meanwhile, urged his supporters not to vote for Le Pen, saying that would be a “terrible error”.
“I say to anyone who is listening: do not make the terrible error of voting for the National Front because you would push the country towards a general conflagration and the ending to which no-one can predict,” he said on the TF1 television channel.
READ ALSO: Le Pen announces eurosceptic French PM pick, if she wins election
Sunday was France's national day of remembrance for the victims of the deportation of French Jews to Nazi Germany, which holds a highly sensitive place in the national psyche.
“What happened is unforgettable and unforgivable,” Macron said at the Holocaust Memorial after pausing before a wall bearing the names of 76,000 Jews who were deported, of whom just 2,500 survived. “It should never happen again.”
“The homage that I wanted to make today is this duty that we owe to all these lives torn down by the extremes, by barbarism,” he said.
Earlier this month Le Pen was criticised for saying today's France bore no responsibility for the 1942 roundup and deportation of more than 13,000 Jews from a Paris cycling track.
Last week her anti-immigrant National Front (FN) became embroiled in controversy over the choice of an interim leader who had been accused of praising a Holocaust denier.
Jean-Francois Jalkh, who was tapped to lead the FN after Le Pen stepped aside to campaign for the presidency, was quickly replaced while Jalkh himself denied making the remarks.
Since qualifying for the May 7 runoff a week ago, Le Pen has made a series of targeted campaign stops in a bid to broaden her appeal.
'Suddenly' green
In Gardanne on Sunday Le Pen vowed to pursue a vision of “true ecology”, saying she wanted to “make the link between the choice of economic model and environmental and health problems.”
The plant, with a workforce of some 400, is controversial for dumping toxic waste known as “red mud” into the Mediterranean for decades. Last year, after the plant stepped up its filtering process, the outgoing Socialist government gave it an additional six years to achieve full compliance with EU norms.
Francois-Michel Lambert, an MP who represents the region for the green party EELV, criticised Le Pen for coming to Gardanne “to make us believe that she has suddenly become an environmentalist”.
The Alteo plant will satisfy all requirements for compliance by next year, said Lambert, who backs Macron for president.
Macron, who was economy minister in the outgoing Socialist government, advocates a “new growth model” that reconciles environmental transition with that of industry and agriculture.
Prominent French environmentalist Nicolas Hulot backed Macron on Sunday but said his endorsement was “not a blank cheque”.
Macron also won a key endorsement from Airbus CEO Tom Enders, who wrote to him in a note carried by the daily L'Opinion: “The excitement you have created is fully merited. You embody change in a very concrete way.”
Le Pen has sought to purge the FN of the anti-Semitism that became its trademark under her father, co-founder Jean-Marie Le Pen — who made the second round in 2002 against the conservative eventual winner Jacques Chirac.
He had repeatedly called the Nazi gas chambers a “detail” of history, and she booted him out of the party in 2015.
Le Pen has attempted to woo new voters on either side of the political divide.
In a video message Friday, she urged the nearly 20 percent of voters who backed Melenchon in the April 23 first round to “block” Macron, saying his pro-business programme was “diametrically opposed” to leftist ideals.
Laurent Saint-Martin, a Macron campaign worker leafleting in a Paris district that voted overwhelmingly for the scandal-hit conservative Francois Fillon, said the campaign was stressing positive reasons for backing its candidate.
“For the second round the challenge is to convince,” Saint-Martin, 31, told AFP. “We're not trying to build an anti-FN front, that doesn't work anymore. We're building a progressive, pragmatic front.”
Another disappointed Fillon voter said he planned to vote Le Pen for the first time because of “massive immigration”.
The 53-year-old head of a film production company, who gave his name only as Fred, added: “I've lived in Africa, I love Africa, but the dream of every African is to come to France…. Le Pen may not do everything she says but on immigration maybe she will change things.”
By AFP's Gina Doggett and Clare Byrne