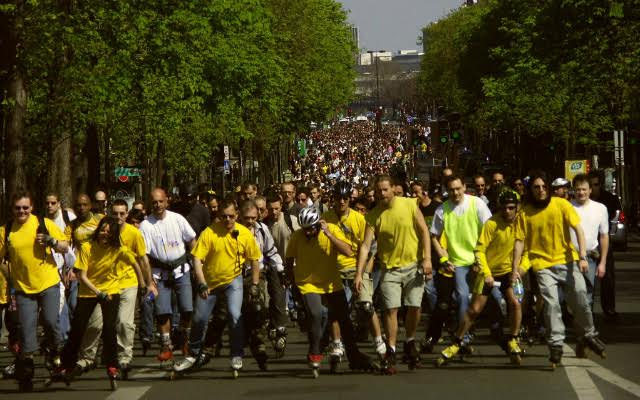 You may have seen them before – swarms of rollerbladers zooming along the streets of Paris while other motorists wait (or get diverted).

But the organized groups have been banned from blading over the past two months after police deemed the activity soaked up too many resources to supervise.

But on Thursday, the prefecture of police granted the group the right to hit the roads once again for a trial run – mainly supervised by volunteers. And the hope is that the trial will allow the group rollerblading to continue as once before.

“Rollerblading excursions break through social boundaries. We are made up of all age groups and all professions. People mix together through team spirit and sharing and that’s important at the moment,” he told 20 Minutes newspaper in March. “It’s not by forbidding such events that we are going to solve the problem of terrorism.”

Police will simply provide two officers on scooters to supervise the event, with the rollerbladers relying primarily on the volunteers to ensure safety as the crowd on wheels passed through bustling traffic and pedestrians.

The routes will no longer include such long stretches of major roads, such as the banks of the Seine river, “to avoid potentially being the target of car rammings”, Le Parisien newspaper reported.
The routes may not be released in advance either.
France was rocked in July last year when 86 were killed after a 19-tonne cargo truck was deliberately driven into crowds celebrating Bastille Day in Nice. The attack was claimed by Isis.