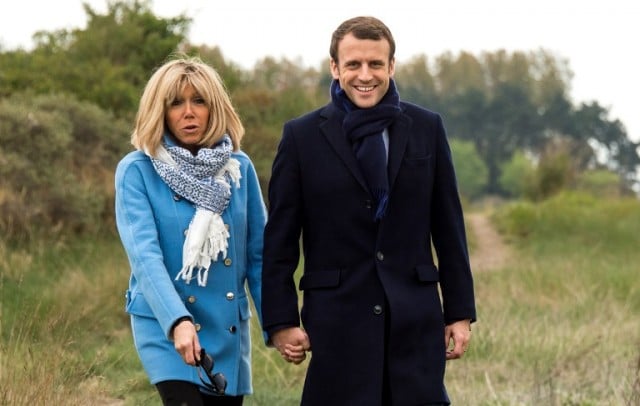 All photos: AFP
Brigitte Macron, as the 64-year-old wife of the man tipped to become France's youngest-ever president, is getting used to being in the media spotlight.
But the elegant blonde is also having to endure unwelcome scrutiny from a foreign press fascinated by the age gap between her and Emmanuel Macron, the talented student she first met when he was 15 and she a married mother of three.
“A cougar at the Elysee?” asked Britain's Times newspaper as Macron, 39, ramped up his campaign against far-right rival Marine Le Pen.
In Germany, the Bild mass circulation daily marvelled: “She's 24 years older! How can such a marriage work?”
Breathlessly dubbing the couple's romance “the love story of the century”, Britain's Daily Mail this week published a picture of the teenager kissing his drama coach on the cheek after starring in a play that she directed.
“Sealed with a kiss!” it said of a gesture that could not be more ordinary in such a setting in France. IN PICTURES: Emmanuel Macron's romance with his former teacher Brigitte Trogneux (the future first lady?)
In China, social media users have been quick to point out the similarities between Macron and his wife to characters from a popular TV show called “In the Name of the People” — which also happens to be the slogan of French far-right candidate Marine Le Pen.
Many of the country's social media commenters have been largely supportive of 39-year-old Macron's relationship with his 64-year-old wife Brigitte.
“Taking a high school teacher and mother as his wife, you can only call this French man a romantic,” one web user said.
“Age isn't distance,” said another. “Please don't make malicious assumptions about others.”
In France — where the private lives of public figures are off limits to the media by tacit agreement, though that is changing — the Macrons have been described as an “unusual couple”.
The closest France came to titillation was a rumour that Macron was using his wife as a cover for being gay, and even that he had a gay extramarital affair.
The rumour was quickly dispelled with a joke by the candidate himself.
Neither has shied away from discussing the bond they formed as teacher and student in the northern city of Amiens. READ ALSO: From teacher to lover to France's next first lady? Meet 'Madame Macron'
Obsession
“He was not like the others,” Brigitte says in a recent documentary about her husband. “I was totally captivated by this boy's intelligence — that's the teacher in me speaking.”
Then: “Little by little he overcame all my resistance.”
The candidate, for his part, detailed their romance in his autobiography, titled “Revolution”: “I was hooked, it was an obsession: to live the life I've chosen with the woman I loved, to do everything to win that.”
He admitted that the start to the relationship was “clandestine” — after all, she divorced in order to marry him two years later, in 2007.
Macron has acknowledged that “given the age difference” the couple had to decide early on that they would not have children.
But, he told French television, “I did not need biological children and grandchildren” to be able to enjoy loving relationships with his wife's three children and seven grandchildren.
The young Macron's family, displeased by the budding romance, banished him to Paris, but the pair kept the fire burning, spending hours on the phone together, Brigitte said in the documentary.
The couple have appeared on the covers of society magazines, with Paris Match (above) showing them cavorting on the beach in the seaside resort of Biarritz.
Sophie des Deserts, writing for the French edition of Vanity Fair, said: “This couple in reverse shows an evolution in society — it's not a powerful man with a younger wife. That says things about Emmanuel Macron's personality.”
Scholars point out that history is full of high-profile women with younger men, citing Cleopatra, Catherine the Great and Elizabeth I. Renaissance couple
France has its renaissance couple: Diane de Poitiers and King Henri II, who was 20 years her junior.
The king married Catherine de Medici, but openly preferred Diane, setting her up in the magnificent Chenonceaux chateau on the River Cher.
Fixation on the age gap is viewed at home as a mixture of ageism, sexism and voyeurism.
After all, commentators note, the age gap is similar to that between US President Donald Trump, 70, and his 47-year-old wife Melania.
Italy — whose flamboyant former prime minister Silvio Berlusconi is nearly 50 years older than his current girlfriend — is not too fussed over the Macrons.
A headline in the daily La Stampa reads: “Brigitte and Emmanuel are a couple — that's all”.
And after the sensationalism subsided in Britain, Zoe Williams, a columnist for The Guardian newspaper, urged cooler heads to prevail.
“Ditch the outrage over Macron's marriage age gap — we all have fascists to fight,” she wrote, referring to Le Pen and her anti-immigration National Front (FN) party.