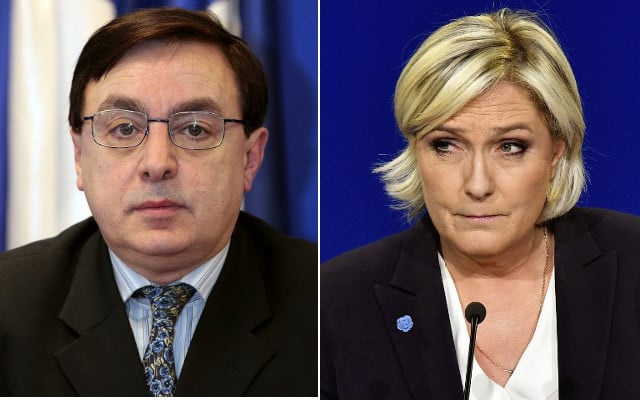 Jean-François Jalkh and Marine Le Pen. All photos: AFP
Jalkh replaced Marine Le Pen this week as National Front leader after she temporarily stepped aside in an attempt to distance herself from her party.
But Jalkh's time at the top didn't last long.
He stepped down on Friday morning after facing criticism for comments he allegedly made over a decade ago about the gas used at Nazi extermination camps.
“I consider that from a technical standpoint it is impossible – and I stress, impossible – to use it [Zyklon B] in mass exterminations. Why? Because you need several days to decontaminate a space … where Zyklon B has been used,” he said in an interview that was unearthed on Wednesday by a reporter with La Croix newspaper.
The chemical agency Zyklon B was used by Nazis in concentration camps in Poland and beyond.
Jalkh has denied any memory of making the comments,
“It’s the first time I’ve heard that kind of bullshit, I have no memory of it,” he told Le Monde. “Maybe I gave an interview, but these are not my favourite subjects.”
But it appears he did indeed make the comments, in an interview with Magali Boumaza, a political scientist behind a thesis on the National Front. Le Pen and Jalkh at the Elysee presidential Palace.
The scandal that followed was enough to force Jalkh to step down from the top spot of the National Front.
The party's spokesman said that Jalkh will press charges, although it remains unclear as yet whether this will be against the newspaper, the journalist, or even the political scientist who first published the comments.
Jalkh will be replaced by Steeve Briois, the mayor of Hénin-Beaumont in northern France, where Le Pen held her election night party after the first round on Sunday.
Members of the National Front have been accused of anti-Semitism and even Holocaust denial many times before.
As recently as March, the party suspended its top official in the southeastern city of Nice after he was secretly filmed denying the extent of the Holocaust.
In February, the founder of the party, Jean-Marie Le Pen, was charged with inciting hatred for alleged anti-Semitic remarks in 2014.
And earlier this month, Marine Le Pen herself stirred up deep emotions over France's World War II history with comments on its collaboration with Nazi Germany.
She said that “I don't think France is responsible for the Vel d'Hiv,” referring to the roundup and deportation of more than 13,000 Jews from a Paris cycling track ordered by Nazi officers in 1942.
For many — notably Le Pen's chief rival for the presidency Emmanuel Macron — the remarks were an instant reminder of the candidate's anti-Semitic, negationist father.