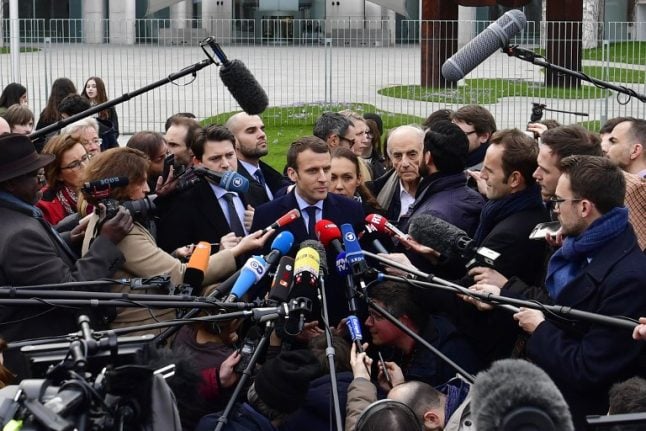 Photo: AFP
Journalists' representatives at more than 30 French media outlets have signed a petition protesting against what they termed restricted access to far-right presidential candidate Marine Le Pen offered by her National Front party, organisers said Friday.
The petition comes after a number of cases in which journalists were excluded from covering campaign events or the anti-EU, anti-immigrant candidate herself, who faces centrist Emmanuel Macron in the May 7 runoff.
“For second-round campaigning, the National Front has decided to choose which media are authourised to follow Marine Le Pen,” the petition says.
“Several outlets have had their representatives excluded from any information or any possibility to follow the National Front candidate,” it adds.
The petition was signed by representatives for journalists at Agence France-Presse (AFP) and editorial staff at other major French media outlets including Le Monde and Le Figaro dailies, TF1 and BFM television channels as well as France Info radio.
“We protest in the strongest way against this hindrance to carrying out our duty to inform,” the petition says.
“It is not up to political structures, whatever they may be, to decide on which outlets are allowed to exercise their democratic role in society.” Emmanuel Macron has also been accused of blocking journalists, with Russian outlets saying this week they had restricted access.
RT TV's editor in chief Margarita Simonyan said her organization had been denied access to the second round of the elections.
“So this is how gracelessly freedom of speech ends in a country which prides itself on its freedoms almost more than it prides itself on its Camembert and Brie,” she said.
A spokesperson from Macron's team confirmed that Russia's state-funded Sputnik channel, RT TV and video agency Ruptly were barred, adding that the channels were a “two-headed entity”, reported Reuters.
Macron's spokesman said the news outlets had a “systematic desire to issue fake news and false information”.
“Spreading lies methodically and systematically – that’s a problem,” he told the paper.
“If this creates problems with the Kremlin, it will be the subject of an open discussion in the event of the candidate (Macron) being elected.”
Russian foreign ministry spokeswoman Maria Zakharova dubbed “outrageous” the move by Macron’s team.
Zakharova said Moscow viewed the ban as “deliberate and bare-faced discrimination against Russian media by the presidential candidate of a state that has historically been vigilant when it comes to free speech”.
Reporters Without Borders warned Wednesday that press freedom has never been as threatened as it is now, in the “new post-truth era of fake news” after the election of US President Donald Trump.
The group's annual World Press Freedom Index warned of the “highly toxic” media-bashing of Trump's election campaign and Britain's Brexit referendum.
Find more election news here (or click on the image below)