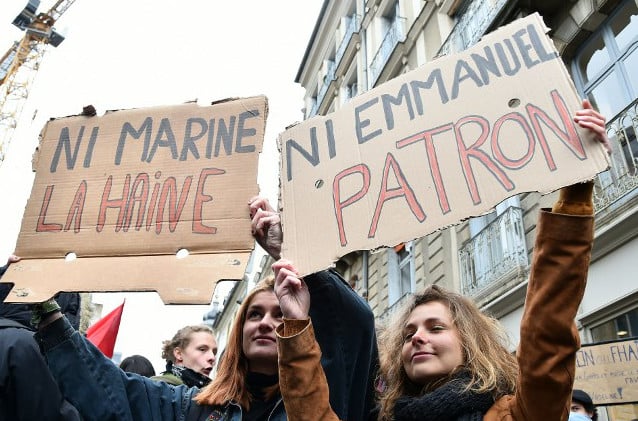 Marine Le Pen’s chances of becoming the next president of France appear to hinge on voters refusing to join the so-called Republican Front to vote against her.

Abstention for the second round of the French presidential election on May 7th could reach a record level due to the fact many voters feel as repelled by liberal Emmanuel Macron as they do by far right Marine Le Pen.

The slogans “Ni Macron, ni Le Pen”, “ni banquier, ni raciste” (neither the banker nor the racist) have been bouncing around Twitter this week along with other hashtags such as #SansMoile7mai (May 7th without me). Anti Le Pen/Macron slogans were also scrawled on banners held by young marchers in Paris this week.

Despite the numerous calls to vote for Macron against Le Pen coming from politicians of all parties, trade unions and religious leaders, who argue that abstaining means a vote for Le Pen, many voters remain defiant.

Many of those on the far left who voted for Jean-Luc Mélenchon in the first round told The Local this week why they are going against the tide and refusing to block the far right’s path to power.

“I do not want to be an accomplice to the disaster that's going to happen anyway, therefore I abstain,” Marylène Martinot told The Local.

Yannick Geffroy, another Mélenchon voter who can’t abide “ultra-liberal” Macron or “fascist” Le Pen said: “Voting would legitimate the candidate who gets elected, so I can only choose militant abstention”.

Macron has tried to stress this week that he understands a win “would not be a blank cheque” to do whatever he wants, but some leftist abstainers do not want to give him a healthy margin of victory. Mélenchon takes a barge along the Canal Saint-Martin in the lead up to the first round of elections. Photo: AFP

Others who won't turn up at the polling stations next Sunday have pointed out that a victory for Macron will simply lead to a victory for Le Pen in 2022, given that the globalisation and free market policies that have contributed to her rise will continue apace under Macron.

Thomas Dubois, a 21-year-old student who didn’t vote in the first round will abstain because he doesn’t know which candidate will be “better or worse for France”, but he admits he is interested to see what would happen under Le Pen.

“In both cases it will be complicated. In fact I want to see what Marine Le Pen would do. It won't be better but I just want to see what it would be like if she became president,” he told The Local.

In the 19th arrondissement of Paris, one of only two arrondissements that backed Mélenchon, Duenas Pablo, a 26-year-old nurse, told The Local that the two remaining candidates are “the worst” options.

“There isn't a candidate who also holds my principles,” he said.

“I'm not scared of Marine Le Pen because on the European level she won’t be able to do everything she wants. She will do some harm but with Macron it will just be the same because we are in the shit. But apparently the French haven’t had enough of being in the shit.”

A 28-year-old woman named Marion, an actress who voted for anti-capitalist candidate Philippe Poutou in the first round said: “Abstaining is the least harmful choice.

“Marine Le Pen is a candidate for a party that has xenophobic, racist and violent politics… but Macron’s programme is going to weaken the working classes and the minorities economically.”

The fraying of the traditional unified Republican Front is a far cry from 2002 when voters turned out en masse to block Marine Le Pen’s father Jean-Marie when he made it to the second round against Jacques Chirac.

Regis Blanchot, who voted for Chirac back in 2002 in order to block Le Pen, won’t be doing the same this time around.

“I'm not going to vote because none of the candidates represent my views,” he told The Local. “It's true that a Marine Le Pen win is a concern. But just because there is a larger danger I am not going to change my mind at the last minute and vote for Macron.

“It's difficult. I voted Chirac against Le Pen but then after that we had no confidence in him.”

Mélenchon has been heavily criticised for not mobilising his voters to block Le Pen. The hard left anti-globalisation leader has left it up to the “conscience” of each of his followers. He was due to clarify his position on Friday.

Among his voters, between 13 and 16 percent will switch across the political divide and vote for Le Pen, polls say, while the rest will be split evenly between those who either back Macron or abstain.

While it’s clear many of Mélenchon’s voters will defy the pressure to turn out on May 7th, over in the 16th arrondissement of Paris, which voted heavily in favour of François Fillon, the story was a little different.

Many Fillon voters The Local spoke to felt supporting Emmanuel Macron was not only the obvious next step to keep Marine Le Pen out of power, but a civic duty. The 16th arrondissement of Paris. Photo: Rose Trigg
“Of course, I'm a citizen so I'm voting,” Francoise Jourdin, 80, told The Local.
“Abstention, even a blank vote, is irresponsible because it risks letting the worst of the worst win. I want to stay in Europe, the consequences of Frexit could be serious, so I'm voting,” she added.
Fillon was one of the first candidates to come out in support of Macron after Sunday's results, urging voters to block the rise of the National Front, a party “known for its violence and intolerance,” adding “abstention is not in my genes”.
Many of his supporters in the 16th felt similarly.
“People who are abstaining don't remember history,” 68-year-old Laurence Gutmann told The Local.
“They've forgotten that Le Pen is someone who is extremely racist, and her father too – that's something that my generation can't forget,” he said.

But it appears that the tendency to abstain is gaining ground day by day, with a poll published this week showing the percentage of Mélenchon voters who intend to vote in the second round had decreased from when the survey was carried out earlier in the week – 64 percent down to 57 percent.

The same fall in voters saying they will vote could be seen among those who backed defeated Socialist candidate Benoit Hamon and conservative François Fillon. Worrying news for Macron.