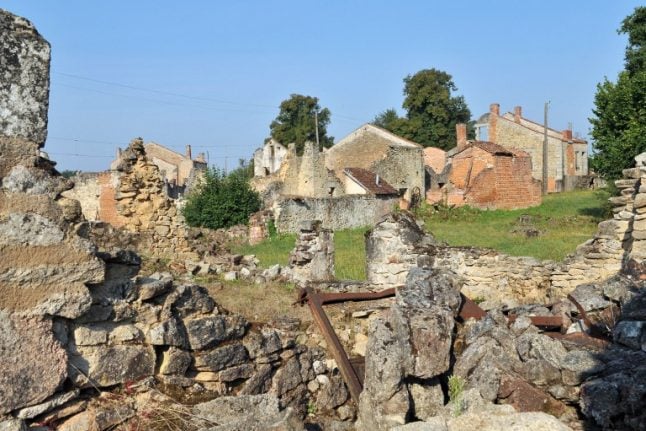 Oradour-sur-Glein in central France, where French villagers were massacred by the Nazis. Photo: AFP
On Friday, Macron visited the central village of Oradour-sur-Glane, where SS troops massacred 642 people in June 1944 — the worst Nazi atrocity in occupied France.
“We must not forget what our people and country went through,” he told the local Le Populaire du Centre newspaper.
Macron warned this week of the dangers to peace in Europe of the far right taking power in France.
“Getting out of Europe, what does that mean? Protectionism is war (…) it is nationalism. The National Front is not the party of patriots but of nationalists and nationalism is war,” he warned.

Nine days before the second round of the keenly-watched election, Le Pen's anti-immigration National Front (FN) found itself again fighting a furore over a senior official's reported remarks about the World War II gas chambers.
On Monday, Le Pen had announced she was stepping aside as FN leader while campaigning in the runoff in order to remain “above partisan considerations”.
Four days later, her stand-in Jean-Francois Jalkh was summarily replaced by Steeve Briois, a popular FN mayor from northern France, after Jalkh was accused of praising the work of a convicted Holocaust denier.
“Mr Briois will take over the interim leadership and there'll be no more talk about it,” FN vice president Louis Aliot told BFMTV news channel curtly. (Oradour-sur-Glane.)
Holocaust controversy
Le Pen, 48, has worked hard to purge the FN of the anti-Semitism that was its trademark under her father Jean-Marie Le Pen — whom she suspended in 2015 for calling the Holocaust a “detail” of World War II — but has been repeatedly wrongfooted by senior party members.
In a French academic journal published in 2005, Jalkh was quoted as praising the “rigorous” research of academic Robert Faurisson in an interview in 2000.
“What I'm saying, and what really surprised me, in the work of a genuine negationist or revisionist… is the well-worked, rigorous nature of the argument put forward,” Jalkh, 59, was quoted as saying in “Le Temps des Savoirs” (The Time of Knowledge).
“We condemn this type of remark and he denies (making) them,” Aliot said. Jalkh did not respond to repeated requests for comment by AFP.
Le Pen's step away from the FN leadership was seen as an attempt to distance herself from a party still seen by many voters as toxic.
She has presented the runoff against Macron, a 39-year-old former banker who champions the EU, ethnic diversity and free trade, as a choice between “patriots and globalists”.
“This election is a referendum for or against France… I'm asking you to choose France,” Le Pen told a crowd of flag-waving, cheering supporters in the southern city of Nice on Thursday.
Macron has warned that a vote for Le Pen, who wants to take France out of the eurozone, restore borders with European neighbours and hold a referendum on France's EU membership, could lead to conflict.
'Protectionism is war'
“Protectionism is war, lies and turning in on yourself,” he told supporters at a rally this week.
Macron and Le Pen, both of whom campaigned as political outsiders, swept aside the candidates of the mainstream left and right in Sunday's first round of voting.
Polls show Macron would beat Le Pen by 19 percentage points in the run-off but analysts have warned that high levels of abstention by moderates or an unforeseen event could yield an upset.
In 2002, when Le Pen's father Jean-Marie made it through to the presidential runoff, mainstream parties and voters rallied behind his rival, conservative Jacques Chirac, to keep Le Pen out of power.
But this time, the tactic has frayed.
Radical left leader Jean-Luc Melenchon, who won 19.6 percent of the vote on April 23, has refused to explicitly endorse the liberal Macron, a decision for which he has been widely criticised.