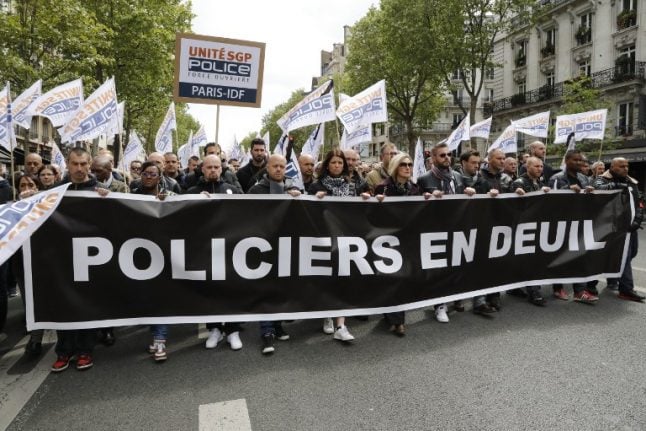 "Police in mourning". All photos: AFP
Some 10,000 police, according to one of their unions, took part in the protest on the famous avenue where one of their number was killed by a jihadist six days earlier.
Yves Lefebvre, head of the Unite-SGP FO police union, addressed centrist candidate Emmanuel Macron and his far-right rival Marine Le Pen, saying: “You must listen to this anger” over security and overwork.
The murder of 37-year-old Xavier Jugele was the fifth of a police officer by radical Islamists in the past two years.
President Francois Hollande on Tuesday led a moving ceremony in his honour.
Officers at Wednesday's march chanted “Police attacked, society in danger” and “Hellish hours, need a social life.” They also paid tribute to Jugele “and colleagues murdered in cowardly fashion in the war against Daesh,” another name for the Islamic State. The jihadist group claimed the killing of Jugele by 39-year-old Karim Cheurfi, whom police shot dead in a gun battle after he had wounded two other officers.
Officers at the head of the march carried a banner reading “Police in mourning.”
At Jugele's memorial ceremony, Hollande called on his successor to give police the means to protect citizens after a string of jihadist attacks across France that have claimed more than 230 lives since 2015.
Le Pen last week seized on the Champs Elysees attack as a vindication of her hardline stance on security and Islamic extremism. Macron, favourite to win the presidency as voters return to the polls for a May 7 runoff between him and Le Pen, has urged voters not to “give in to fear” and vowed to step up security cooperation with EU partners.
To allay police fears over threats to their safety on duty, the government recently announced it would allocate 250 million euros ($270 million) for new equipment and vehicles and ease the rules of engagement for the use of lethal force.