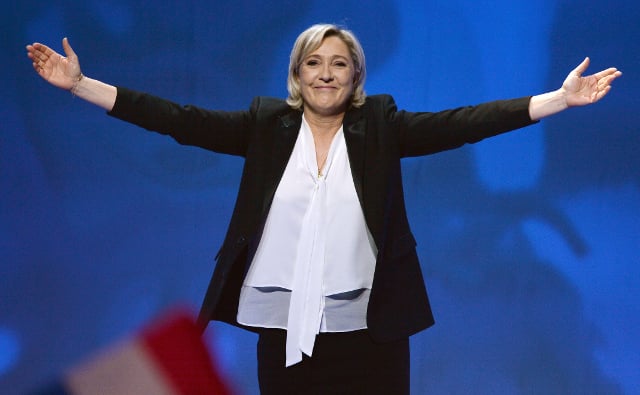 Photo: AFP
With Emmanuel Macron enjoying a seemingly unbeatable lead over Marine Le Pen (roughly 60 percent to 40 percent) in all opinion polls, the man who set up his own political movement just a year ago appears to have the keys to the Elysée Palace in his pocket.
But there is a way Marine Le Pen could yet defy the odds and the analysts and pinch those keys from her liberal rival in the crunch head-to-head vote on May 7th.
Each of these scenarios listed below won't be enough to push her over that 50 percent threshold, but a combination of all of them could just scupper her rival and open up a route to the presidency.
1. Macron makes an absolute mess of his campaign
After an impressive victory over Marine Le Pen in the first round Macron makes a complete hash of his campaign for the second round and fails miserably to convince French voters to back him. In fact he turns them off him and has a disastrous performance during the pair's live TV debate on May 3rd in which Le Pen lands blow after blow on her young rival whom she has dubbed “Hollande's baby”. This could all happen of course.
An opinion poll in BFM TV on Wednesday revealed half of French people think Macron has already messed up the start of his second round campaign by spending the day after his victory behind closed doors developing a strategy while Marine Le Pen was out early campaigning and appearing on TV.
On Wednesday Liberation newspaper's front page had a picture of Macron with the headline “Eh Manu, are you coming down?”, saying the the En Marche! candidate needs to roll his sleeves up and start uniting the country against Marine Le Pen. His strategy should be simple: Convince voters Marine Le Pen is a danger for France. At the moment he's not doing enough.
2. Complacency sets in as France expects an easy Macron win
Liberation's point was that Macron cannot afford to be complacent because if he is then voters will follow his lead.
Marine Le Pen needs French voters to look at the lead Macron has in the polls and think 'I don't really need to go and vote'.
French voters have become accustomed to Le Pen and her party scoring highly in first round votes in recent years before losing in the second round. They may just take it for granted that it will happen again.
Complacency could be Le Pen's best weapon and centre-left Le Monde newspaper is worried enough that it sent out a warning on Tuesday.
“The very worst scenario – and the most dangerous and irresponsible one for the future of France – would be to assume that an eventual Macron victory was a certitude,” read the paper's editorial.
President François Hollande issued the same wake up call to Macron.
3. Macron makes more mistakes READ ALSO: Why Emmanuel Macron would be wise not to celebrate too early or too lavishly
Emmanuel Macron's first round campaign was on the whole pretty smooth, given that everyone expected his inexperience would lead to slip ups.
But his comments about France's crimes against humanity during its colonization of Algeria and gay marriage caused a needless furore during the campaign and forced him to backpedal.
Macron began the second round campaign with a big error of judgement.
Waving to supporters from a roof top, hugging and kissing members of the crowd, making a 15-minute triumphalist speech when everyone was expecting him to remind voters of the dangers of Le Pen… and then to top it off, hosting what looked like a premature victory party in a swanky Parisian bistro. This was the wrong image to present to voters, especially the 76 percent who did not back him.
Macron has vehemently defended his actions, but someone in his strategy team needs a good old telling off. A poll on Wednesday showed almost half of French people thought it was mistake to celebrate the result of the first round. It was and voters might not forgive many more.
4. Scandal Mistakes will harm Macron but a scandal could seriously scupper his path to the Elysée.
The sorry tale of François Fillon shows that French voters can be unforgiving if politicians are seen to be acting above the law or hiding something from the public.
Macron's critics have been sniffing around for dirt, especially on the subject of his astronomical earnings whilst he was a banker with Rothschild and his subsequent declaration of wealth to authorities, which was called in to question earlier this year, before being given the all clear.
For Marine Le Pen to win she might have to hope someone, somewhere, is sitting on something that could severely embarrass and undermine her rival at the crucial point in the game.
5. Angry abstainers refuse to back the banker
Le Pen might not be able to persuade voters to back her because despite her efforts to soften her image she and her National Front party are still considered too extreme and too xenophobic by many.
But she might be able to persuade them not to vote for Macron. Abstention is seen as a potential game changer. It could reach a record level in the second round and that will help Le Pen.
Many abstainers don't want to back Macron in the hope that his victory over Le Pen will be narrow and therefore won't be a mandate for him to do as he pleased. That's a risky game.
This week Twitter has been an angry place with abstainers dominating the trending hashtags.
Many voters are refusing to endorse either “banker Macron” or “fascist Le Pen” with the hashtag #SansMoiLe7Mai (without me on May 7th), as well as expressing their distaste at the Le Pen alternative with the trending hashtags #JamaisMacron (never Macron) and #SaufQueMacron (anything but Macron).
French physician Serge Galam from the Cevipof think tank predicted the victory of Donald Trump says an unprecedented level of abstention could yet result in a Le Pen victory.
“The day of the vote, people will come up with all kinds of excuses not to go to the polling stations,” he said. “It's like a bitter pill you know you have to swallow but do everything to avoid taking it.” Analysts also expect a record number of “blank votes” to be cast this year. In 2012 there were two million.
It's clear the former Rothschild banker and economy minister under François Hollande is not palatable to swathes of voters. 6. French voters all go on holiday or “fishing”
With May 8th, the Monday following election night a public holiday, many French people will be spending their long weekends away from their polling stations.
That means if they want to vote, they have to organise for someone to vote for them by proxy, for those who would vote Macron this might not seem worth the effort if they think his win is guaranteed.
One of Le Pen's aides told AFP this week that they could do with voters going fishing for the day on Sunday May 7th, seeing it as a crucial condition of a Le Pen victory.
7. She needs to win voters from defeated rivals READ ALSO: Where will Marine Le Pen find the 50 percent of votes she needs to become president?
This is a basic requirement for Le Pen.
Le Pen needs to win over voters from both humiliated conservative candidate François Fillon and the hard-left's Jean-Luc Mélenchon.
Around a third of Fillon's supporters are predicted to jump over to Le Pen's ship thanks in the main to her hardline stance on security, immigration and Islam and her obsession with protecting France's cultural identity and heritage.
But she also has to win convince Mélenchon's voters that she is the real workers champion and can take on his fight against globalisation, the free market, the EU, the elites and the “system”.
She also has to bag every single vote from fellow anti-EU candidates Nicolas Dupont-Aignan and Francois Asselineau, who won almost six percent between them in the first round.
8. The Republican Front falls apart
The so-called Republican Front where the right and left unite to keep the far right from power is showing signs of fraying.
Jean-Luc Mélenchon did not call on voters to block Le Pen and said on Wednesday he would keep his vote secret. Many on the right have been ambiguous too.
It's a far cry from 2002 when politicians united and hundreds of thousands took to the streets to mobilise people against Le Pen's father Jean-Marie had reached the second round. He was duly trounced.
There is little sign of a united front in 2017.

There have been calls to block Le Pen by France's politicians, including Nicolas Sarkozy and even a leading police union but voters have grown accustomed to them in recent years, perhaps even tired of them. They may just be ignored this time round. 9. Security thrust back to top of agenda
France has suffered three major terror attacks since 2015 that have left more than 230 dead. Other smaller attacks have taken place including the recent killing of a policeman on the famous Champs Elysée avenue.
Another atrocity could convince voters that Le Pen's hardline stance on foreign Islamists and immigration is now necessary.
10. Le Pen ditches the one policy that scares the French people
The one Le Pen policy that seems to put voters off her the most is her promise to leave the euro and bring back the franc, because people fear the disastrous consequences on their living standards.
Dominique Reynié, head of the Foundation for Political Innovation think-tank in Paris, told AFP: “If it wasn't for the euro I think she'd stand a chance.”
Could she take everyone by surprise by scrapping a key policy of hers? It's unlikely at this late stage and if she did it would anger a certain section of her core voters, but they would probably still back her.
Marine Le Pen needs absolutely everything to go her way over the next two weeks, but there are signs things already are.
By Rose Trigg/Ben McPartland