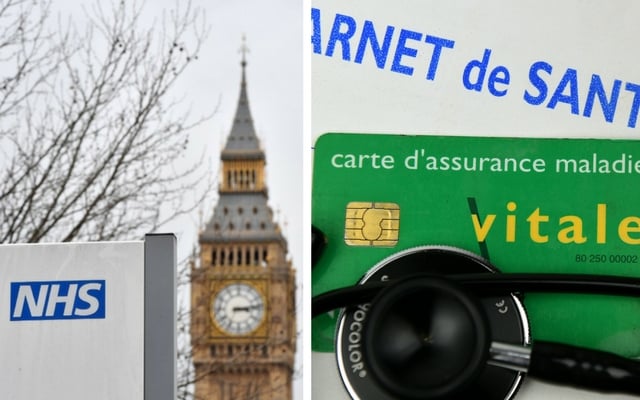 Photo: AFP
When you are on your own with a sick kid, things can become very stressful and it’s easy to panic (been there, done it). In France, your physician always listens to you. You’re always given a prescription, a routine examination, and taken seriously.
Your symptoms will never be minimised, and if your doctor has the slightest doubt, you’ll be referred for a scan, an X-ray or a blood test. Needless to say, things are slightly different on the British side of the Channel.
The weird thing is that, come to think of it, the health budget is similar in France and in the UK (OK, a bit higher in France, but not massively higher), and life expectancy is, again, very close. So why does it feel so different?
Here are ten ways that the British health service – the NHS – differs from the French system. 1. You have to work to get an appointment
Over here in the UK, the first hurdle, after being registered, is to successfully land an appointment. What looks easy in theory is a game of patience and resilience. The line is always busy, and the receptionist will do her utmost to encourage you not to get an appointment, because you’re not sick, are you?
In France, I have always managed to get an appointment within 48 hours.
After many times calling your British practice on speed dial and being hung up on a few times, you might be given a slot, usually two or three days after you need it. Don’t believe it’s the last of the hurdles you’ll have to overcome. It’s just the start.
2. You have to convince your doctor that you're ill
Once you get to see your GP (that’s what they call their doctor over here. It stands for General Practitioner), which usually happens after a long wait in the waiting room, you need to convince him or her that you need help. Most of the time, you’ll be told to come back in forty-eight hours to see if you/your kid feel better, and maybe to take some Nurofen in the meantime. Helpful advice (yes, even we French do sarcasm sometimes).
He/she will not examine you at all, because he/she will type on the computer during the whole consultation without looking up. Do not listen to your GP. As a French woman, I had to learn to keep on complaining until he/she gives up. In France, you usually end up with a prescription longer than your arm without having to say anything. I told you, things are different in the UK. You have to fight to be taken seriously. Devise your strategy accordingly. Photo: alexraths/ Despositphotos
3. Some French ailments don't exist in the UK
We French also have specific ailments, such as heavy legs or a heavy shoulder, that don’t seem to exist on this side of the Channel but are regarded as significant in France. I am not suggesting that we French are a nation of hypochondriacs but we do take our health very seriously. Come to think of it, have you ever heard a British person complain that they are suffering from “heavy legs”? I haven’t. What about you?
4. You have to book an appointment for each symptom
Another surprise was to find that, in London, you need to book one appointment for each symptom. This means that, in theory, if both your ears and your throat hurt, you need two appointments. I wonder whether you have to book the whole day to get a full examination?
When I didn’t know I was pregnant and was feeling nauseous, I went to see my GP. He spent half of the ten-minute session telling me off because my back was hurting a bit, and I should therefore have made two appointments instead of one.
That’s when I puked on his desk and collapsed. It got his attention. In the UK, it’s all about making your point as clearly as possible. I am pleased to report that I did.
5. No suppositories
I have to break it to you: the British don’t do suppositories. So why are suppositories so popular in my home country?
This is the one subject that we French are quite relaxed about, whereas the British conversely get very hot under the collar whenever suppositories are mentioned. In fact, we French will quite happily use suppositories for any ailment.
I was told countless times by my French pharmacist that they work much quicker than tablets. This is because they go straight into the bloodstream, and I was also explained that they are better for the system, because less chemicals are added to the active ingredients. As a result, French doctors love to prescribe them.
Photo: olly18/ Deposit photos
My family doctor used to find them very valuable for babies and older people, because they bypassed the stomach. I am sure he was right. He often prescribed them to adults too. I was told that GPs are happy to prescribe them over here, but often it’s the patients who aren’t keen. The worst thing, apparently, is the patient who complains the tablets the doctor gave them were so big they could hardly swallow them.
6. There's little in the way of out of hours service
Don’t be sick outside of working hours. Seriously: don’t you dare. Obviously forget about being sick over the weekend or during the holiday period. Your GP practice will be closed anyway, and your best bet is to spend the day at a hospital emergency department.
There is such a thing as a hotline in case of a problem, but it’s hard to actually speak to someone, and, once you do, you will clearly understand that you have caught them in the middle of their cup of tea. The advice I was given in the middle of the night for my daughter who was burning up with fever was to give her an ice lolly.
In France, with some luck, they would have sent a doctor to my place and deliver the medication within two hours. At. My. Door. Photo: ginasanders/ Deposit photos
7. Questionnaires get very personal
Over here, I was explained that my ethnicity or sexual orientation don’t matter, except for statistical purposes. In France, such things are considered to be private. You NEVER EVER mention them, let alone fill a questionnaire with your name on it for your GP practice, for whatever purpose it might be (apparently it’s for statistics).
To make matters even worse, my GP practice makes me fill a questionnaire on my religion/sexual orientation and ethnicity every couple of years or so (you never know, things might have changed, right?). In short, in the UK, be prepared to replay to questions like:
Please state whether you are:
1.     A heterosexual male
2.     A heterosexual female
3.     A homosexual male
4.     A homosexual female
5.     A bisexual male
6.     A bisexual female
7.     Male to female transgender
8.     Female to male transgender
9.     Other (please specify)
It’s not personal, it’s for statistics. Relax, dear. Yes, even if you are French.
8. Payment is different
In France you usually have to pay for each consultation, and you get reimbursed. That’s simply how the system works. Over here you don’t pay anything if you go through the NHS. A private consultation with a GP will cost €23 in France. In London, it can be anything up to £120, and it usually isn’t reimbursed by health insurances. And don’t get me started on the cost of dentists: it’s two to three times more than in my home country. A rip-off. Photo: AFP
9. There's waiting lists for operations
I first heard about waiting lists for non-urgent operations in London. I didn’t even know it existed. That’s what being brought up in France does for you. Silly French me.
10. There's pills in the supermarket
Over here, you can buy some medication in a supermarket, while you are grocery shopping. This still amazes me. No need to go to a pharmacy to buy vitamins, aspirin or ibuprofen. Amazing, right? In France, you have a family doctor and a family pharmacist. They know you inside out. What can I say? I miss them. I was pampered by the French system and didn’t even appreciate it.
In short, let’s tell it as it is: it looks like the British put up with a lot more than we French do. Which is why, I believe, French expats need to be extra-careful when they move, especially if they suffer from a chronic condition that requires specific care. It’s all about finding what works for you.
Muriel Demarcus runs the blog French Yummy Mummy, this post was written in collaboration with Qare, a French telemedicine service in London, click here to read the original.