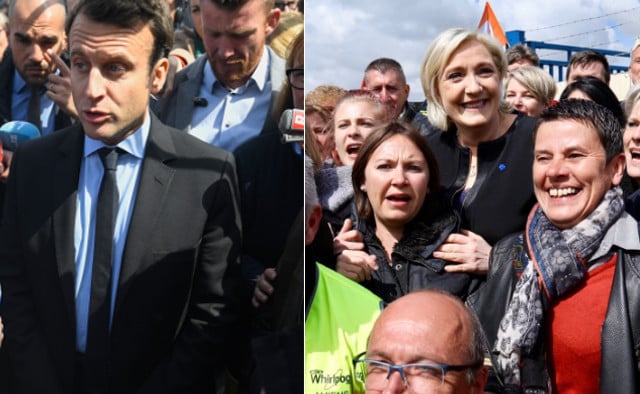 Photo: AFP
There were chaotic scenes at a Whirlpool domestic appliance factory in Amiens, northwest of Paris, on Wednesday.
Presidential candidate Emmanuel Macron, who is actually from Amiens, paid a visit to the plant only to be greeted by chants of “Marine President!” and whistled by workers at the factory, where 295 jobs are threatened by outsourcing to Poland.
French media said the chants of “Marine President” had come from National Front militants who stayed to greet Macron after Marine Le Pen had made an unannounced stop hours earlier.

Despite the hostile welcome the 39-year-old Macron spent over an hour trying to talk to workers and making himself heard above the shouts and whistles. The media were asked to wait outside as the melee looked like getting out of control.
“I am here to speak to you,” said the pro-business former economy minister, ringed by a horde of cameramen and journalists. “Of course there is anger in this country, there is anxiety. Responsibility must be taken, that's why I'm here.”
At times the discussions became tense with the workers as he tried to make his point.
Leftist filmmaker François Ruffin criticized Macron for not having visited the factory previously during the campaign and for “having a lack of solidarity with workers”, but he also praised the former minister for his courage for facing the anger of workers.
After an hour an half it appeared that he might not have won them over but he did at least calm their anger. Some thanked him for coming to which he responded: “There is no need to thank me. It's normal. I am committed.”
“From chaos to dialogue,” was how one French news site summed up Macron's afternoon.
Macron told workers he could not offer them false promises and criticized Marine Le Pen for doing exactly that.
Directly criticizing Le Pen, Macron said “stopping globalisation and closing borders” is not the solution.

Macron's appearance at the factory had to be delayed because Le Pen, who has seized on the Whirlpool closure to drive home her Eurosceptic agenda, turned up unannounced at the factory earlier in the day.
She was met with applause and posted a flurry of images on social media of herself, surrounded by factory workers, all smiling.
“In Amiens where I went to meet and support the workers at Whirlpool. With me, their factory won't close!” she wrote in the Tweet below.

At that point Macron was in the Chamber of Commerce meeting with union representatives.
He blasted his rival for a blatant political publicity coup.
“We talked with the unions for more than an hour, while Marine Le Pen has been playing politics by haranguing political activists in a parking lot,” he told Le Parisien newspaper.
He tweeted: “Marine Le Pen spends ten minutes with party members in front of cameras, while I spend and hour and a quarter working with the unions, with no press. Everyone will make choice on May 7th.”

He added that Le Pen was full of “false promises” that “don't solve any of France's problems”, arguing that even if Le Pen was elected the factory would still risk closure.
The PR Battle of Amiens quickly flared up on Twitter under the hashtag #whirlpool. Many criticized Le Pen for taking selfies with workers whilst commending Macron for spending an hour and a half talking to them.

Despite his sharp words for Le Pen, Macron has been facing criticism in recent days that he has not been taking the fight to the far-right leader.
Le Pen, on the other hand, has turbo-charged her campaign with a string of appearances and statements, leaving her opponent on the back foot.
At the crack of dawn on Tuesday she was at the sprawling Rungis food market outside Paris, taking aim at what she said was Macron's desire for “total deregulation, total opening up, total free trade”.
In contrast, her opponent has huddled in strategy meetings over June legislative elections that would determine the shape of a future Macron government.
Le Pen will hold a rally in the Riviera city of Nice on Wednesday, a bastion of France's right that was targeted by a jihadist-inspired truck attack that killed 86 people in July.
READ ALSO: This is how Marine Le Pen could become the next president of France